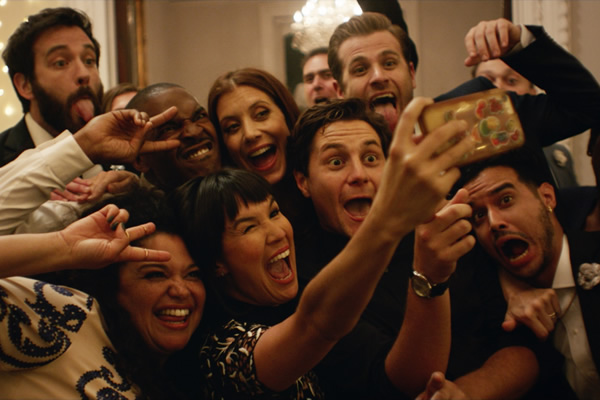 The first is: find the right title. Doyle and his team nailed this the second time around. “Almost Love” played the queer festival circuit last year under the awkward title “Sell By.” That title yoked the movie to the unpleasant premise that relationships, like ground beef, have expiration dates. It’s not a romantic notion and didn’t capture the movie’s bubbly spirit.

The second is: casting is crucial. Doyle, an actor with an impressive list of credits, gets this one absolutely right. The appealing and diverse ensemble cast blends together seamlessly. It’s an effective and inclusive combination of veteran character actors, rising stars and fresh new faces.

The third is: balance. That’s where Doyle gets in trouble. He creates pleasant characters and interesting scenarios, but none of them are strong enough to carry the movie. The cast is great, but there’s only so far they can go with underdeveloped roles. Doyle’s direction is strong, but his writing doesn’t give him enough to work with.

The central couple is Adam and Marklin. They literally seem to be a picture-perfect couple. Marklin (the under-used Augustus Prew) has struck it rich as a social media “influencer.” He fills their luxurious apartment with brand name baubles and documents every moment of their lives for his followers. Adam (the excellent Scott Evans, a member of the Evans acting dynasty) is a frustrated artist. He makes an excellent living as a “ghost painter” for the famous Ravella Brewer (the wasted Patricia Clarkson) but wants to create his own art.

Adam’s best friend is Elizabeth (Kate Walsh of “Grey’s Anatomy”). She’s been married to Damon (Chaz Lamar Shepherd) for 15 years, but they’ve hit an impasse. He wants kids; she doesn’t. Marklin’s best friends are Cammy (the delightful Michelle Buteau of Netflix’s “Tales of the City”) and Haley (the effervescent Zoe Chao). Haley is a teacher whose student Scott James (the absolutely adorable Christopher Gray) has become infatuated with her. Cammy (occupation unclear) has stumbled into an improbable relationship with a homeless man (Colin Donnell from Broadway’s latest “Anything Goes” with Sutton Foster and the CW’s “Arrow”).

The acting is strong, but some of the cast members are more successful than others in fleshing out their underwritten roles. Buteau is dynamite. Without overshadowing her castmates, she dominates the screen with her boisterous energy and crackerjack timing. She has an exciting chemistry with Donnell and smoothly balances the character’s brassy lust for life with a genuine concern for her friends.

The chemistry between Evans and Prew is also strong and Evans nicely underplays the cliché of the frustrated artist. He’s appropriately brooding but never too whiny.

But the relationship between Adam and Marklin is not strong enough to hold the movie together. We never get a good sense of who they are and what holds them together, or what brought them together in the first place. They’re the lynchpin couple who draws everyone else into their orbit, but their bond doesn’t have the gravity to hold the film’s social system together. The characters end up drifting in space.

The movie also lacks a strong point of view. Is Doyle making fun of Marklin’s social media empire? Is Marklin in on the joke or has he been caught up in the wave of Internet fame? Is Ravella Brewer a ravenous monster who is devouring Adam’s talent or is she an amiable hack coasting on her fame and making a quick buck for herself and her collaborators? It’s too bad the screenplay doesn’t give the talented cast more to work with.

While Doyle’s screenplay doesn’t quite jell, his work as director is solid. The movie looks lovely (kudos to cinematographer Ludovic Littee from “Orange is the New Black”) and moves along with a confident pace. Hopefully he’s already developing his next film.

“Almost Love” is a thoroughly enjoyable movie. While writer/director Mike Doyle has some trouble with the script, he and a great cast deliver a fine rom-com that embraces diversity and sparkles with humor and warmth.

Given the COVID-19 crisis, the theatrical release of “Almost Love” has been delayed, but the movie will be available through VOD and other streaming sources.