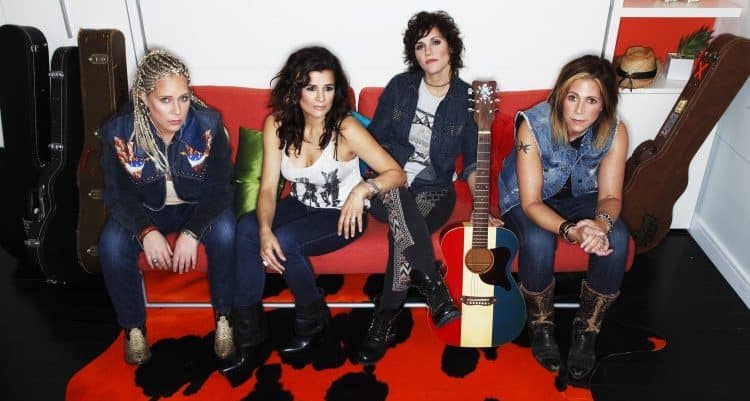 When Georgia Voice spoke to Kristen Henderson nearly two years ago, we discussed her family life with wife and GLAAD president/CEO, Sarah Kate Ellis. This year, she shared a new passion for her band, Antigone Rising: a nonprofit called Girls Rising. The band is bringing its rock/country blend back to Georgia on March 17 at Eddie’s Attic and March 18 at Crimson Moon Café in Dahlonega. We caught up with Henderson to let her fill us in on how the band is using music to empower women on an international scale.

Tell us about the band’s 501(c)3 nonprofit, Girls Rising.

A few years back, we were touring with the Bangles. We would talk with them about how insane it was that there were no hugely popular all-female bands. They told us that when they heard our first album, they thought that we were going to be the next, big all-female band. It’s always nice to hear, but things didn’t turn out that way at our label. They felt like they were blazing a trail with the Go-Go’s. But when it comes to marketing and things like that, it seems that all-female bands just aren’t as commercially viable.

A few months later, we were invited by the US government to travel to the Middle East to do some outreach programs in schools, youth centers, etc. It was like Beatlemania for those kids to see any Westernized band – but especially an all-female band. After these shows, throngs of kids were chasing us. There were moments when it was actually dangerous.

How did that translate to what you do here in the US?

We wanted to be able to go into schools and meet with groups, empowering them to pursue careers outside of what they typically see for girls. Things like science, technology, math, engineering and the arts. Having this nonprofit is giving us more of a purpose than just making albums, going out on the road and playing music. Now, when we go to a town, we try to bring kids in from a local school or youth center. We’ll have them in for sound check and talk about our experiences as women in a male-dominated field.

Are you going to be doing that in Atlanta?

Yes! We’ve got a local Girl Scout troop coming to our sound check. We can’t wait! And whenever we can, we try to bring other women in too. We’ve brought Cady Coleman, a NASA astronaut, to talk to kids. You don’t see many female astronauts. We try to find women who are doing really unique work that isn’t so unique for guys to do. Like a female airline pilot. We want to expose the kids to strong women doing creative and interesting work that isn’t typical of women.

Any stories that particularly stand out to you from your outreaches?

Yes! There was a women’s center at the top of a mountain in this [Palestinian] village called Ni’lin. – we had to drive up a dirt path to get there. All the women from this town came to this – every woman in the village. It was a cultural exchange where they shared their traditions with us and we shared with them.

One of the teenage girls was fully covered and had a burqa on – covered in traditional Muslim clothing. She came up to [Antigone Rising drummer] Dena [Tauriello] and me, who were both wearing our Chuck Taylor high tops, and she pulled up her outfit and she had Chuck T’s and blue jeans under her wrap. She was a slam poet and she performed her poetry for everyone. She only spoke Arabic. We didn’t understand the words that she was saying, but the passion and the fire behind it was so intense that we didn’t need to know. We could see her heart in her eyes. She wanted to be strong and empowered and express herself through her poetry.

Another time, we were in Tel Aviv and I was being interviewed for a television show like “Good Morning America,” but it was for Israel. It took place in this bombed-out building that they didn’t want to repair because if people knew they were still broadcasting from there, they’d just re-bomb it. I’ve never been in a place like that.

I was expecting to get questions like “Where are you performing tonight?,” but this female host started firing questions at me like, “Why do you think you can come into our country and try to get any of our women to identify with you?” She didn’t look very warm – her delivery felt hostile but that was my interpretation.

I answered, “We’re here to learn from you as much as to be understood by you.” I told her about our cultural exchange in Ni’lin. She seemed to like that answer. Later that night, she and the host of the show came to the show and were really kind and it was a great experience.

You said last time we spoke that Atlanta is the band’s Southern home. What do you want to tell your fans here?

We do consider Atlanta a second home. We have so many friends and family there – my kid’s cousins live there and we are there every Easter. The audiences at Eddie’s [Attic] bring something really unique because they’re serious about their music. When you find a room like that to play, as an artist, you feel really lucky. The Atlanta audience comes for an experience. We are going to deliver that.