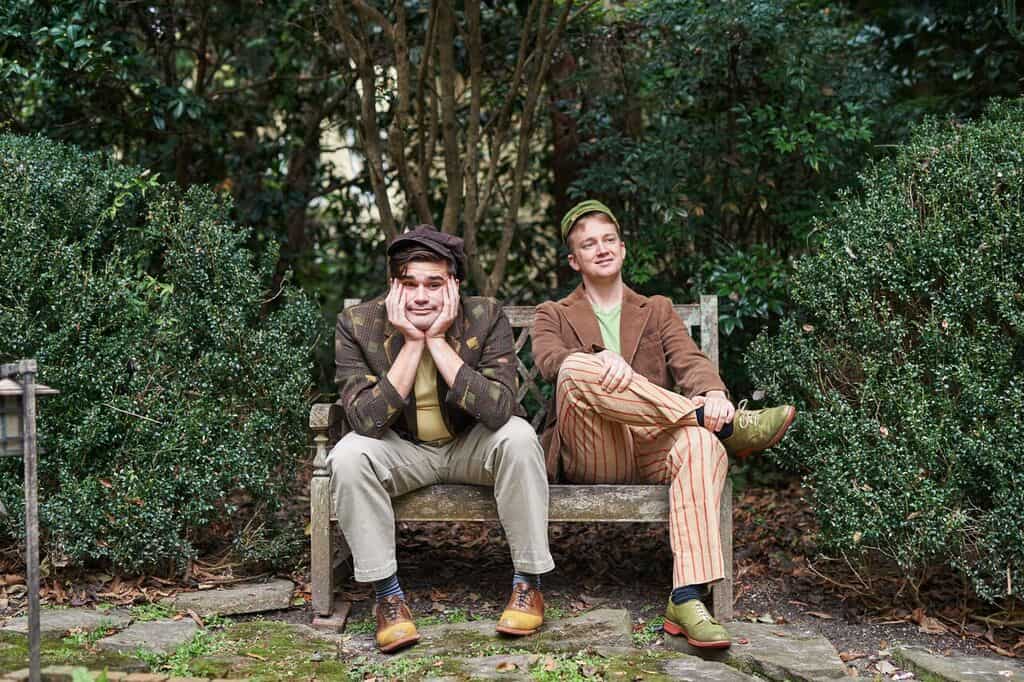 Theater: A Year with Frog and Toad

In a season marked by some high-profile holiday shows and myriad versions of “A Christmas Carol,” another holiday favorite has quietly returned. A remount of Synchronicity Theatre’s “A Year With Frog and Toad” is currently running, starring two out actors.

Chase Davidson and Robert Lee Hindsman are the leads for this new version. Based on the books by Arnold Lobel, “A Year With Frog and Toad” was nominated for three Tony Awards in 2003, including Best Musical, and was a big hit for Synchronicity when the company first staged it, taking home four Suzi Awards in 2007.

It’s a children’s show, albeit one that has a wide appeal. The musical follows a year in the life of the two characters as they grow up and deal with the world around them. Frog is the good-natured one of the two, while Toad is grumpy and not always pleasant.

“Frog is very mature in contrast to Toad,” says Davidson, who plays Frog. “He knows a lot about the world, about nature. He is comfortable with himself and the environment around him. He’s very simple, a minimalist. Toad, on the other hand, hasn’t figured everything out yet.”

Hindsman, who plays Toad, agrees the two are complete opposites. “Toad is not as clean and quick-witted as Frog is,” he says. “He is slower but quicker to love and arrive at an emotion. Toad wears his heart on his sleeve. There is no premeditation before he does anything.” The actor admits he and the character share many characteristics.

Hindsman graduated from Birmingham Southern College in 2014 and moved to Atlanta to go through the Serenbe Playhouse apprentice program last year. There he was involved in shows such as “The Wonderful Wizard of Oz,” “Man of La Mancha,” “Oklahoma!” and “Snow Queen.” He was recently seen in Actor’s Express’ “Stupid Fucking Bird’ as well as Stage Door Players’ “The Mystery of Edwin Drood.” A performer since the age of seven, he calls himself a musical theater nerd, going through months where he is completely obsessed with a particular show.

Davidson came out when he was 15, and his family includes other LGBT members. He’s been no stranger to gay roles throughout his career, although he says that he didn’t accept this role because of any perceived subtext. He just loved the musical and the score.

The original production of the show teamed gay actors Spencer Stephens and Bryan Mercer and was directed by Clint Thornton. It was one of the 2006–2007 theater season’s best shows. It also had something of a gay vibe.

“You can absolutely pull those undertones from the show—two males riding a sled together,” Hindsman laughs. “I think it can be misconstrued. It’s not the bigger meaning of the show. It’s really the trials and tribulations of these two and their beautiful friendship.”

During the course of a year, the two characters go through the whole cycle of friendship—a fight, excitement, confusion, and isolation. Yet they weather the storm and stay close. Hindsman feels the message here is about love and acceptance. “That is important for kids to see and for families as well,” he says. “These two are very different, with their own quirks that can frustrate them. But at a point you say, ‘lf I love this person, I can do what I need to do to help them or our relationship.’ If these little frogs and toads can love and accept each other for who they are, then I can.”

The subject of friendship is one that he says is rarely addressed. “You don’t really see male friendships depicted on TV and movies or plays,” he says. “If you see it, it’s the masculine, ‘Hey bro’ kind. You don’t see the tenderness. This focuses on the tenderness of their friendship, the emotional needs, what they need and how they give it. You can see the parallels of any friendship in the show.”