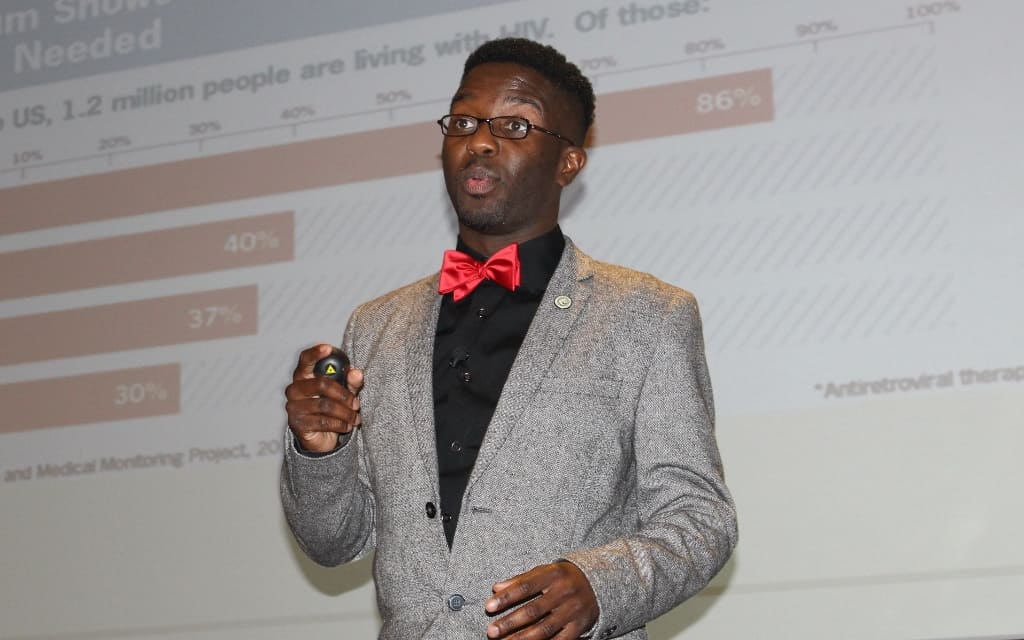 Atlanta at the center of HIV/AIDS news, events this month

Georgia ranks second in the U.S. in the rate of new HIV infections and Atlanta is fifth among metropolitan areas according to the Centers for Disease Control and Prevention. So perhaps it’s appropriate that Atlanta would be at the center of a flurry of HIV/AIDS news, initiatives and events this first half of December.

It began on the morning of Dec. 1 on World AIDS Day when the Fulton County Task Force on HIV/AIDS unveiled phase one of their strategy to not only fight, but end the disease. The report was the result of a year-long process since the task force was established by the Fulton County Board of Commissioners last December following the release of data showing that, among other things, 25 percent of those infected with HIV in Georgia live in Fulton County. Young, black gay and bisexual men were hit especially hard by the disease.

The task force had many recommendations for making people more aware of their HIV status, including expansion of routine opt-out testing, widespread use of new “4th generation” HIV tests that are able to detect the infection earlier, and an update of state and county data systems to correctly classify people with acute infection.

As far as prevention, the task force cited that little blue pill that everyone’s been talking about recently, saying, “implementing combination prevention including scaling up PrEP among those at highest risk of HIV infection will also help in decreasing the number of new diagnoses.”

As to care and treatment of those living with HIV, the task force took a note from San Francisco’s playbook and recommended shortening the goal for linkage of care to three days, which they say will require the creation of new patient-friendly systems.

Increased access to needle exchanges, increasing the number of condoms distributed, and correcting the bureaucratic and leadership issues that resulted in the Fulton County Department of Health and Wellness returning $3.6 million in federal HIV prevention funds were among the other recommendations.

The task force will release a full, comprehensive strategy to end AIDS in Fulton County next June. A series of listening sessions on the topic will be held throughout the spring.

Several members of the Fulton County Task Force on HIV/AIDS were among the roughly 100 in attendance later that morning of World AIDS Day at the HIV Youth Policy Advisors Program presentation at the National Center for Civil and Human Rights.

The program, created by Georgia Equality, matches elected officials and clergy with HIV-positive youth advocates who serve as their special advisors on the issue. Numerous state senators, state representatives, Fulton County commissioners and other community leaders looked on as the youths made their presentation and policy asks.

Daniel Driffin, one of the HIV-positive youths in the program, handled the bulk of the presentation, getting a particularly strong reaction from the crowd calling on the state to expand Medicaid.

“In every meeting you go to from now on, just drop a slide in about Medicaid expansion,” Driffin said to applause.

Various other youths presented their findings, with comprehensive sex education being another topic that drew strong interest from the crowd. HIV criminalization was another hot-button topic that drew support, thanks in no small part to policy advisor Nina Martinez’s testimony on the matter.

“I have not had a personal relationship in 10 years because basically the law allows you to litigate a lie, a lie in which my sexual partner does have access to know the truth about my HIV status,” she told the crowd. “One is Google…and two is couples-based testing and counseling. Everyone should have the right to do that. So I believe the laws should be modernized to reflect the fact that people who do know their HIV status, do use condoms and will take their medication will prevent transmission to others, but you can’t even get people to get tested if you tell them they’ll be a walking felon.”

Fulton County Commission Chairman John Eaves commended the youth policy advisors on their work, but implored them to continue and take more steps like taking part in upcoming commission meetings.

“Your stories are great, but your stories will have a whole lot more impact if you’re inside the rooms where the decisions are made and the moneys are appropriated,” he said.

More than 3,000 HIV experts descended on Atlanta Dec. 6-9 for the 2015 National HIV Prevention Conference (NHPC). Numerous panels, plenary sessions and debates were held throughout the conference addressing a variety of issues surrounding the subject.

Among the findings released during the conference, southern states lag behind the rest of the nation in HIV treatment and testing and death rates among those living with HIV in southern states are three times higher than those in other regions of the country.

“CDC is responding to the challenge of HIV in the South and nationwide by prioritizing the hardest-hit areas and populations and investing in the most effective strategies,” said Eugene McCray, M.D., director of CDC’s Division of HIV/AIDS Prevention in a statement. “These strategies include expanded testing for HIV, helping people living with HIV obtain ongoing care and treatment, and increasing awareness of and access to all effective prevention tools, including condoms, pre-exposure prophylaxis – or PrEP, and interventions to decrease risky behavior.”

There was mixed data after the announcement that annual HIV diagnoses in the United States fell by 19 percent from 2005 to 2014, but gay and bisexual men of color showed increases of over 22 percent in the same timeframe, and young black gay and bisexual men ages 13-24 seeing an alarming 87 percent increase. The CDC also announced at the conference two new awareness and education efforts to reduce new HIV infections—a testing campaign called Doing It and an online HIV Risk Reduction Tool.

However, a number of HIV/AIDS groups and activists mounted a counter-conference to the NHPC, which took place at the National Center for Civil and Human Rights and was hosted by The LGBT Institute.

The groups, which included Atlanta’s Counter Narrative Project and SisterLove Inc. among roughly 20 other organizations from across the country, criticized the NHPC for not devoting enough resources to HIV criminalization, integration of reproductive justice and sexual health, housing and healthcare access for those living with HIV in the South, upholding human rights for transgender people, sex workers and others. They also criticized the Office of National AIDS Policy’s Federal Action Plan for many of the same reasons.

Officials with NHPC and ONAP did not respond to a request for comment on the counter-conference.

The GLBC’s recommendations include expanding Medicaid, increasing HIV funding in heavily affected areas, decriminalizing HIV, opt-out HIV testing during routine blood panels, making PrEP more affordable and widely available, expedited medical treatment for the partners of those living with HIV, increased testing in jails, expanding confidentiality for minors getting tested for HIV and seeking PrEP, sex education beyond abstinence, and providing regular progress reports to ONAP and the U.S. Department of Health and Human Services Office of Public Health and Science on the progress made implementing these plans.

Sen. Fort tells Georgia Voice that the GLBC is in the process of finalizing which of these initiatives they will pursue most aggressively during the next legislative session in January.