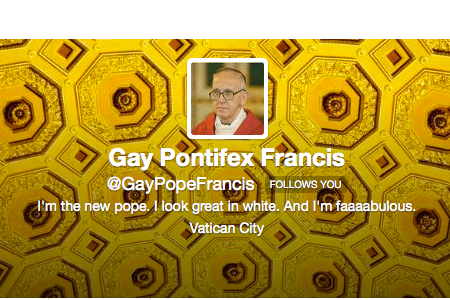 There have been all kinds of fun Twitter accounts created by pranksters who want to pay homage to things like Angela Jolie’s leg , Marco Rubio’s water break and, with nearly 300,000 followers, Pimp Bill Clinton.

And today, with the announcement of a new pope  and one of the most important days in a Catholic’s life (and also apparently everyone at CNN’s life as well), comes a new fun Twitter account, @GayPopeFrancis.

Of course, it comes as no surprise the real Pope Francis I disapproves of marriage equality and even believes gay people adopting children is a form of discrimination against the children.

But Gay Pope Francis is the pope we perhaps dream about. His account is still very new and there are less than 10 followers as of this writing, but @GayPopeFrancis has tweeted some zingers already:

Where my gays at? I know how you love Argentinians on balconies in fabulous outfits.

Hope y’all liked that white smoke before my entrance, because from now on… PAPAL SMOKE MACHINE. Thx for idea, @ladygaga!

Same sex marriage is a machination of the Father of Lies. I like my fellas NSA, can’t be havin’ some clingy boy tryin’ to tie me down.