Every Child Deserves a Family Act to be introduced

The Georgia Voice Editors
Family
May 8, 2013 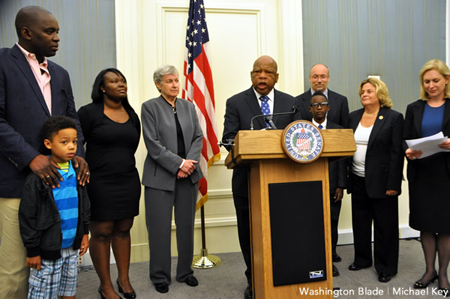 Sen. Kirsten Gillibrand (D-N.Y.) and Rep. John Lewis (D-Ga.) are leading a group of lawmakers in the House and Senate preparing to introduce legislation that would prohibit anti-LGBT bias in adoption and foster care services.

The legislation, known as the Every Child Deserves a Family Act, would restrict federal funds for public child welfare agencies if they have laws or practices allowing for discrimination in adoption on the basis of marital status, sexual orientation or gender identity. The bill would also prohibit discrimination against LGBT children seeking families.

Gillibrand emphasized the importance of the legislation on Tuesday during a news conference on Capitol Hill as a means to ensure LGBT families seeking to adopt can do so without fear of anti-gay bias.

“This patchwork of state laws often lead our children across the children across the country without the opportunity for a safe home and loving parents,” Gillibrand said. “Meanwhile, there’s an untapped pool of 2 million LGBT people, people who are willing to become adoptive or foster parents, according to the Williams Institute at UCLA.”

In the House, the lead sponsor of the legislation is Lewis, a leader in the African-American civil rights movement and longtime LGBT ally, who’s taking over the bill along with Rep. Ileana Ros-Lehtinen (R-Fla.) now that its former patron, former Rep. Pete Stark, has retired from Congress.

“I’ve fought too long and too hard against discrimination of every kind not to serve as a champion for this bill,” Lewis said. “Foster children are innocent bystanders when troubled families crash and burn. The foster care system does it best to rescue these little babies from the flames of abuse — neglect, drug addiction, domestic violence and some of societies worse problems.”

“Our country has an obligation to care for its most vulnerable children, and we can do better for the 104,000 youth in foster care who are searching for a home,” Hecht-McGowan said. “The time has come to fix the patchwork of adoption and foster care laws across the country and ensure that young people in care have every opportunity to find a forever home.”

The legislation wasn’t introduced on the same day as the news conference. Steve Majors, a spokesperson for the Family Equality Council, said a “Dear Colleague” letter went out on Tuesday asking lawmakers to sign on in support of the bill in anticipation of introduction at later date.

In an interview after the news conference, Gillibrand said the first step in the process to guiding the legislation toward passage this year is building co-sponsorship for the bill — particularly finding a lead GOP co-sponsor in the Senate.

Asked whether she’s spoken to Sen. Rob Portman (R-Ohio), who recently came out in favor of marriage equality after learning his son is gay, about the legislation, Gillibrand replied, “We’re still working on it.”

As noted by The Huffington Post, one potential supporter for the legislation in the House could be Rep. Paul Ryan (R-Wis.), who said during a town hall that he supports adoption rights for gay couples, although he continues to oppose same-sex marriage.

“I do believe that if there are children who are orphans who do have a loving person or couple — I think if a person wants to love and raise a child they ought to be able to do that. Period. I would vote that way,” Ryan said.

Ryan’s office didn’t immediately respond to a request to comment on whether he’d support the Every Child Deserves a Family Act.

During the news conference, a number of gay people and their children spoke out about the importance that adoption has meant for their families. Among them was Martin Gill, a gay foster dad, and his eight-year-old son, Nathaniel, who spoke publicly at the news conference for the first time.

Gill filed a lawsuit against Florida to allow him to adopt Nathaniel and his brother. That challenge led the state in 2010 to stop enforcing its 33-year-old law prohibiting openly gay people from adopting.

“It was not so much the fact that we were going to be discriminated against; it was the fact that they were going to split two young brothers up that had always been together, that had come together into our home, that by the time of our adoption, had been with us for six years at the time of our adoption,” Gill said. “That’s what really led to our journey. That’s something that no foster children should have to go through; it’s also something that no adoptive parent should have to go through.”

Also at the news conference was Mary Keane, a lesbian New York City resident and retired health care consultant, used her savings to buy a 12-bedroom house and intended it to become a safe-haven for LGBT teens rejected by their families. Instead, she became a foster mother for troubled adolescents. Keane has formally adopted six children and plans to adopt four more.

“Many of my kids, they never, never cared about my sexual orientation,” Keane said. “It was about as irrelevant as you could possibly get. Having parented for 13 years now, what I’ve found is that, if anything, they learn a lot. Some of my kids have written award-winning essays about marriage equality and why gays should be allowed to marry.”

Anni Keane, one of Keane’s daughters who’s now an adult, teared up during the news conference as she talked about the importance of having a mother, saying, “Thank God she decided to be a parent for me. Because she stepped forward, I have a mom, and my daughter has a grandmother.”

Philip McAdoo, a gay Atlanta resident and graduate student at the University of Pennsylvania, talked about the experience that he and his partner, Sean Cavanaugh, had after the two-year process that led them to adopt their son Zaden, who’s now seven years old.

“When we started talking about family, he said, ‘Oh, I know what’s important in a family,’” McAdoo said. “We were like, ‘What’s that?’ He said, ‘Where there’s love.’ There was never a question that there were two dads; he always wanted to know who was going to play football with him.”

Jody Huckaby, executive director for PFLAG National, said in a statement his organization in its 40 years of existence has “seen the positive effects parental support” can have on a child — regardless of the sexual orientation of the parent.

“Why, then, should more than 400,000 children remain in foster care—104,000 of whom are eligible for adoption—when they could receive this support from loving, capable, and qualified lesbian, gay, bisexual, and transgender parents?” Huckaby said.