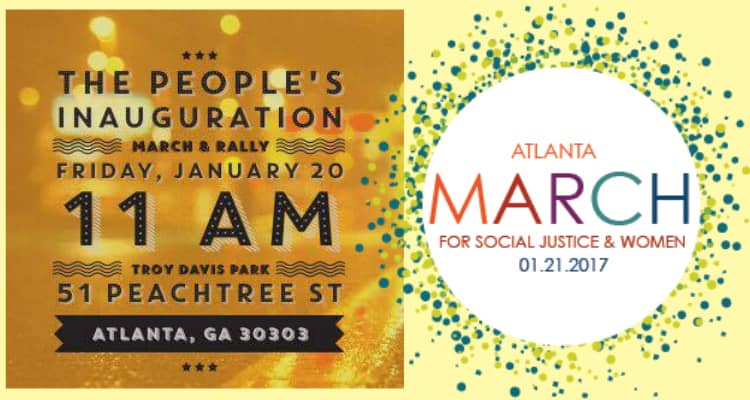 America’s political scene turns a new leaf tomorrow, and Atlantans are gathering in force to remind the incoming administration that the voice of love will never be silenced.

The People’s Inauguration kicks off anti-discrimination activities this weekend in Atlanta with a march downtown and a rally at City Hall, ending with a demand that Atlanta declare itself a sanctuary city.

“That is a term that’s pretty contentious and politically charged, and also sort of legally ambiguous,” said Collin Cornell, an organizer with Showing Up for Racial Justice, one of the organizations involved. “But it is also a pretty powerful tool as a concept: sanctuary, offering asylum from the kind of gathering forces of white nationalism.”

Cornell said the hope is to unite many of the marginalized communities in Atlanta by bringing together advocacy groups to challenge the city to create policies that help it become a sanctuary.

“Atlanta itself has a reputation, which it cherishes, of being a welcoming city, a city that is a destination for immigrants and refugees, that is a black mecca and all of that. It’s necessary because in a time when vulnerable communities are even more endangered because of the incoming national administration, for Atlanta to live up to its reputation, it’s got to take more active steps,” Cornell said. “Black, queer, poor folks, folks with mental disabilities or disabilities in general … they are much more imperiled and so Atlanta has to step up its game to protect those residents.”

On Saturday, Atlantans are invited to march in solidarity once again, this time in conjunction with and in support of the Women’s March on Washington.

“It was important to do it here at home. Living in a red state, there’s so much work that needs to be done,” said Janel Green, one of six co-organizers of the Atlanta March for Social Justice and Women. “We all felt that as women, we needed to stand up for [negative rhetoric about women], but I think people realize this is a village. Our desire to support not only women, but others who have been marginalized and harmed, we felt it was important to bring all of them together because these issues impact all of us.”

Kendall Brown, a LGBT ally and activist in Dunwoody who moderates one of the Atlanta-area progressive groups on Facebook, will be marching alongside Green.

“I think that the best way to affect change is to work locally. It’s hard for me as an individual on a national scale to affect change, but when it comes to my city I feel there are steps we can take to actually do something and see the results from that,” Brown said.

She will be marching for her brother, Karson.

“My brother is gay and when he came out to me, it was before the marriage equality bill had passed. That struck my little activist chord then,” Brown said. “I’ve marched for him several times and I’m flabbergasted that he should ever be treated like a second-class citizen because of who he loved.”

Green said many of the marchers will be participating in such an event for the first time. She advised packing snacks, water, anything children might need if they are coming too, and said marchers should wear comfortable shoes. Brown added that if marchers start to feel uncomfortable, get to the side so it is easier to step out and catch their breath.

Mindy Friedman of Decatur will march Saturday alongside volunteers with the Human Rights Campaign. She and her wife Megan “married” more than a decade ago — the proposal was with a cotton candy bubblegum Ring Pop — and in June 2015 were finally able to book their dream real wedding. She marches also to protect her marriage, women’s reproductive rights and to protest the type of hate speech and white supremacist rhetoric that now appear “OK now” based on the behavior of the new administration.

“I worry for the state of all minorities. We need to remain an active part of the political process. We must fight for our rights and also stand up when we see injustice against others,” Friedman said.

Friedman urged Donald Trump and Mike Pence to remember they are the administration for all Americans.

“Even those who do not support you, didn’t vote for you and believe differently than you do,” she said. “What makes America great is our diversity, our freedoms — including freedom of speech and of the press, and our democratic process. None of us is perfect. Power doesn’t make you more perfect. Listen. Watch. Keep an open heart. Let’s work together to keep to progress what makes us great.”