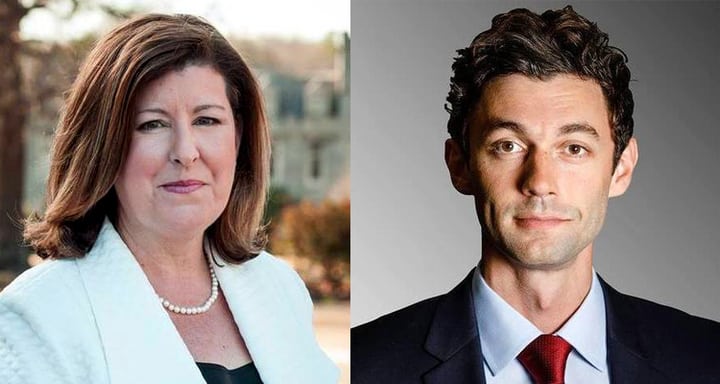 On the night of April 18, Georgia’s 6th Congressional district — and the President, who’d taken to Twitter hours before — watched with bated breath to see who would take former Sen. Tom Price’s vacated House seat.

If it wasn’t going to be Democratic candidate Jon Ossoff, the next step to fill the seat would be a runoff between Ossoff and Republican candidate Karen Handel, predicted Robin Biro, political director with Fulton Democrats and commentator for Fox News.

Biro was right, and now a tightly contested race is underway between Ossoff and Handel, whose perspectives on LGBT rights and equality take center stage.

Thirty-year-old Ossoff is clear on his views.

“I oppose any legislation or policy that allows discrimination against LGBT Americans, and I oppose this [‘religious freedom’] executive order, which undermines the intent of Congress in order to allow more money into our political system,” Ossoff told Georgia Voice. “Same-sex couples should have the same rights as every couple in every context. There’s no excuse for discrimination in federal law or state law, and it’s a sad commentary on the state of affairs in Washington that we’re still having these debates.”

Can Handel handle her own record?

Speaking of debates, Handel was challenged to a six-debate series by the Ossoff campaign, and originally agreed to do three — but reportedly backed out of at least one, once it was revealed the debates would be open to the public, Reporter Newspapers said. It’s not just Ossoff who wants to hear from his opponent. A community petition garnered hundreds of signatures in just hours of individuals urging Handel to participate in the series.

Handel’s team did not respond to multiple calls and email requests for interviews from Georgia Voice as of press time — nor has she with a number of other outlets, and doesn’t immediately plan to, according to The Associated Press. Thus, her 2017 stance on LGBT rights is unknown, and her history of support is not the most reliable.

During her campaigns for Fulton County Commission in the early 2000s, Handel supported domestic partner benefits and was both a member of and endorsed by the gay GOP group Log Cabin Republicans. She flipped from those positions during her campaigns for both secretary of state and governor, saying she never joined Log Cabin Republicans and that emails stating she supported domestic partnerships were written by campaign staff without her knowledge.

In June 2010, Georgia Voice spoke with a former member of Handel’s County Commission campaign team about the reversal, and he said he “certainly would not have made any statement like that if it had not been expressed from herself and clearly understood that that was her position.” He also confirmed Handel was a member of the Log Cabin Republicans for at least two years. An email exchange from July 2002 supports his statements.

“As I’ve told you, I do support domestic partner benefits, and confirm my position here, although I do have concerns about a domestic partner registry,” Handel wrote in the email. “Bottom line is that I will work with you and other GLBT leaders to develop workable legislation.”

During her failed gubernatorial campaign, Handel said in a TV interview that not only did she oppose gay marriage, but would consider a law banning gay adoption. In that 2010 interview with WXIA, Handel said, “I am against gay adoption. … Do I think that gay parents is in the best interest of the child? No. But we do have our court system that deals with many and most of those issues.”

It was clear Handel’s first goal in this election cycle was financial. In an April 19 email titled “Democrats PANICKED,” sent to those who signed up to receive campaign updates, Handel’s team called Ossoff’s campaign a failure and pleaded with supporters to donate $50 in an “Emergency 48 Hour Money Bomb.”

According to the Federal Elections Commission, Handel received $463,744 in campaign contributions by March 29, and campaign emails indicated she’d gotten an additional $1 million in the week following the special election — and the aforementioned email blast. Ossoff, as of that same date, received $8.3 million in donations.

“Democrats are TERRIFIED that they’ve lost their chance at stealing the special election in Georgia,” another email, hours later, said.

And two days later, this message from Team Handel — allegedly authored by the president: “Liberal Democrats are spending millions of dollars trying to steal a Congressional seat from Republicans in Georgia. They’re fighting to defeat a strong conservative who wants to continue to advance our America First agenda across the country,” Trump’s email said. “Ossoff is funded by Nancy Pelosi and Chuck Schumer, who desperately want to land a blow against my presidency.”

Another fundraising email was sent out claiming to be from Newt Gingrich — “This election means a lot to me. Not only does it have vast national implications, but it’s also for my old seat in Congress.”

Georgia Democrats responded on April 21 with a fundraising email of its own: “The GOP will do whatever it takes to hold on to this seat — even if they have to hold their nose and pretend to be united behind perennial candidate Karen Handel. And they will burn through whatever resources and dark money is at their disposal to get her elected.”

Though Handel was keen to have the president fundraise for her at an event for huge donors in late April, Ossoff said he had no plans for anything similar should a well-known Washington figure come to Georgia on his behalf.

“I think the comings and goings of major figures in Washington are a lot less important than the candidates’ vision for representation of the district,” he said. “I’m a lot more focused on directly talking to voters.”

He plans to continue his field program as the campaign preps for the June 20 runoff.

“The whole team was honored and thrilled to have beaten expectations by such a margin, outperforming the polls. We’re ready to build on that huge margin of victory,” Ossoff said. “If I’m elected, I’ll be a public, outspoken, unashamed ally of the LGBT community with a zero-tolerance policy for hate speech, discrimination or scape-goating — no questions asked.”