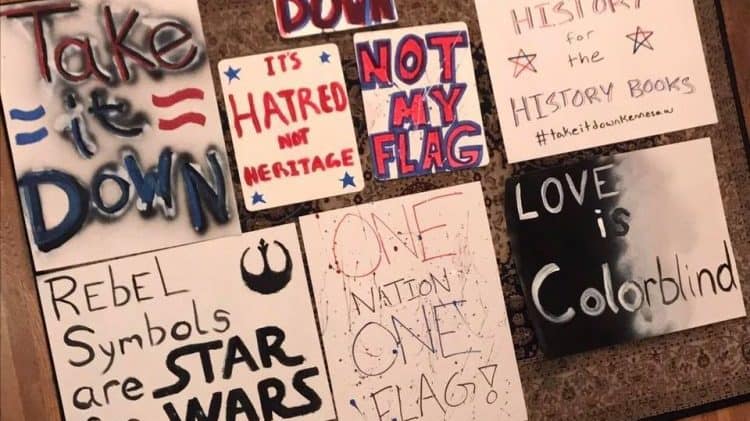 A petition started by Reid Jones, who is gay, brought the city of Kennesaw one step closer to removing the Confederate flag that flies downtown.

The flag was erected in 1962, which Jones told Georgia Voice last week makes it clear it was put up as a symbol of racism during the Civil Rights Movement, and not as a tribute to Southern history.

Last night, according to the Atlanta Journal-Constitution, Kennesaw City Council members voted 4 to 1 to petition state leaders to “allow local municipalities the ability to determine, in their sole discretion and within their jurisdictional limits,” the best way to honor military service. Right now, Kennesaw officials cannot remove the flag without the state giving the city control over what flies in its own parks, as the flag — and other Confederate statues and monuments — are protected under state law, part of a compromise that happened when Confederate symbolism was removed from the Georgia flag in 2001.

“Talked to people with conservative stances on the issue and found solid compromises on how to memorialize history in a respectful manner to our entire community,” he said. “Had almost unanimous support of this with the exception of City Councilman Jim Sebastian … but the resolution passed!! Couldn’t have done it without everyone who showed up today!”

Jones told Georgia Voice that advocating for the removal of this flag from public property, where taxpayer dollars go to maintain the Confederate flag and replace it when it is vandalized or stolen, was not a statement against private citizens flying the flag on their own property, nor was it advocating against removing history. The flag flies between a Southern history museum that educates visitors on the Civil War and its aftermath, and the home of a private citizen who flies several Confederate flags in his yard.

“I have seven known ancestors/relatives that fought on the side of the Confederacy and I’m smart enough to be ashamed of what they believed in, but proud of their conviction to die for what they believed in,” he wrote. “That doesn’t mean I want to fly a symbol of what they believe in. One of them, my fifth great uncle John H. Windle, was ironically a flag-bearer that was one of the first to die leading a Confederate army into battle at the Battle of Rappahannock. If anyone in this community has a claim to heritage and the flag, I would certainly be part of that facet of people and I strongly advocate against this symbol.”

An opposition page was created on Aug. 18, Keep the Confederate flag Flying in Kennesaw, Georgia, and includes a post that says, “Removing the Confederate flag will open Pandora’s box … we must fight back … political correctness is the devil and whitewashing history will be a huge mistake.”

The page has 202 “likes,” and just before the city council meeting posted that “the little blonde protestor is at the park now … he [sic] waiting for his 15 minutes of fame … he thinks this is a game.”

Georgia Voice has reached out to Kennesaw City Council and Jones for further comment and will update the story as remarks come in.