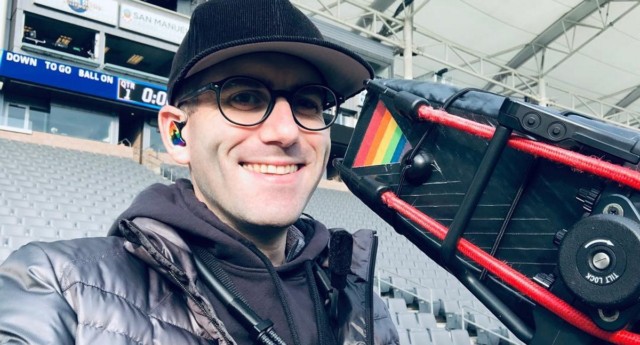 Scott Winer, born and raised in Atlanta, will be the Super Bowl’s first openly gay cameraman, according to Outsports.

Winer will attend and work at his first Super Bowl on Sunday (February 3) in the Mercedes-Benz Stadium, filming for CBS Sports.

The 34-year-old told Outsports that the job was a dream come true.

“Doing a show like a Super Bowl is one of those things that in the back of your mind it’s what you work toward, but there’s also that part of you that wonders if it’s ever going to happen because it seems like such a lofty goal,” he said.

Winer, who lived in Atlanta until he was 18, said the game’s location makes the experience all the more surreal.

“When I came out in high school, it was a difficult time for me personally,” he said. “So I don’t think ever in my wildest dreams I would have ever imagined an opportunity to work a Super Bowl in my home city, under any circumstances.”

Winer tries to subtly but visually represent the LGBTQ community, both for others and himself. He wears rainbow Nike BeTrue shoes and has a rainbow sticker on his camera.

Winer’s career could be said to begin in sixth grade, when he filmed his high school basketball team. Since then, he’s filmed games in the NFL, MLB, NHL, and NBA.