Project Q Atlanta was first to report this story. 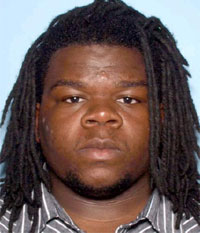 Carlson said the motive was robbery and that Williams was targeting transsexual sex workers that he sought out on backpage.com. Dunwoody police say they also know of at least one other transsexual person who was allegedly attacked by Williams in DeKalb County and are asking others who are victims to come forward by calling the Det. Jesus Maldonado at 678-382-6925.

“We know of two victims right now. It appears the other victim was robbed on Wednesday prior to our victim. We don’t know why he shot our victim,” Sgt. Carlson said.

The first victim, who is also transsexual, reported to police she was robbed, Carlson said. Carlson said the suspect was using the first victim’s cellphone and the Dunwoody victim was advertising on backpage.com.

“We want to make sure there are no other victims out there,” he said.

While the motive in the Dundwoody shooting is robbery, Carlson said that currently no items have been found missing in the apartment. This is the city’s first homicide this year.

The Dunwoody Police press release on the arrest:

The motive in this case was Robbery. We believe the suspect was targeting or identifying his victims through backpage.com. The suspect contacted our victim, Roberto Calderon-Guzman, through this site prior to his murder. If there are any other victim’s, we ask they contact their local police department.

The Dunwoody Police Department has arrested 20 year old Christopher Williams of Stone Mountain, for the murder of Roberto Calderon-Guzman. The homicide occurred at the Peachtree Place Apartments located at 4612-B Peachtree Place Parkway on June 22nd. The victim, a 28 year old Hispanic male, was shot inside his apartment around 1222 hours that morning. He was transported to Northside Hospital where he was pronounced dead. Williams has been charged with one count of Murder (F), and one count of Possession of a Firearm During the Commission of a Felony (F). He is currently being held at the DeKalb County Jail. If you have any further information regarding this incident, please contact Detective Jesus Maldonado at (678)382-6925, or jesus.maldonado@dunwoodyga.gov

Correction: In an earlier version of this story, it was incorrectly reported the first victim did not report her robbery to police. She did report it to police. Also, this is Dunwoody’s first homicide of the year.

Top photo: Noxy Cassandra Calderon was a popular Latina drag queen performing at such clubs as Club Rush. She was killed Friday, June 22, in an apparent robbery. (via Facebook)