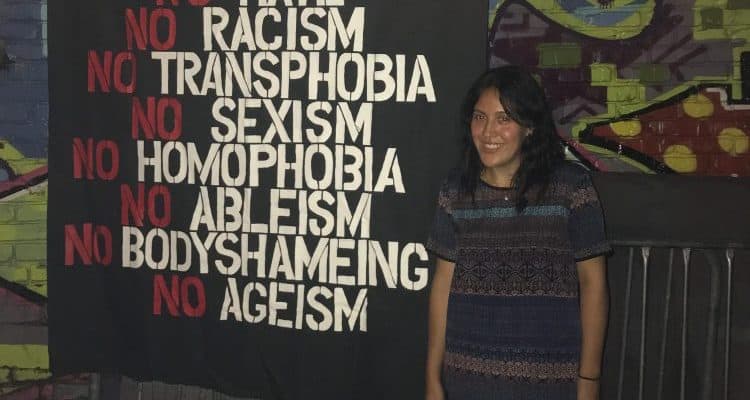 First it was the Affordable Care Act. Next, “bathroom bills.” Then a ban on transgender service members. Now, President Donald Trump told Congress it has six months to act on the Deferred Action for Childhood Arrival, an Obama-era program that grants temporary work permits and protection from deportation to nearly 800,000 undocumented immigrants who came to America as children — an estimated 75,000 of whom identify as LGBT, according to The Williams Institute.

One of those is Atlanta-area resident Mileidi, who asked to be identified only by her first name.

“I was surviving before DACA, but I didn’t really feel like I really existed until after. I don’t think you can explain that. You really do become kind of more of a person and it sucks that someone can take your humanity by taking your documentation status,” she told Georgia Voice.

Mayor Kasim Reed also called Trump’s choice “a shameful abdication of moral leadership,” according to the Atlanta Journal-Constitution. In early September, the Atlanta City Council passed a resolution that says city police should not arrest or detain anyone based on certain requests from Immigration and Customs Enforcement, which are routinely issued for jails to hold people an additional two days so they can be picked up and deported. The council also voted in favor of a second resolution that urges the president to reverse his decision on DACA.

Between the events of Sept. 11, 2001, and the creation of DACA, it was difficult for undocumented young adults to seek citizenship, Mileidi said.

It especially wasn’t going to happen because when Mileidi turned 18, she had a girlfriend, but marriage equality wasn’t the law of the land yet. Even after it was, though, there was still bad news.

“I could get married to my girlfriend, but I would have to go back to Mexico with a time penalty for a period of anywhere between weeks to 13 years. There’s no in-between. They just hit you with a random number,” she said. “That was something I wasn’t willing to risk. I didn’t want to be gone for 13 years because, honestly, at that point I might as well just stay in Mexico. I think that’s the point.”

Under DACA, there is a way for recipients to leave the country for an approved purpose and return legally, which makes the path to residency and citizenship easier. At first, Mileidi chose not to pursue this, but things changed in November 2016.

“When I found out that Trump had won, I freaked out. He promised to end DACA right when he got into office,” she said.

She immediately filed for DACA renewal and the advanced parole program, and found out she was accepted into the program in April.

“I told myself I was going to as quickly as possible travel because everything is so uncertain when you’re under this presidency,” Mileidi said. “I bought my ticket to Mexico April 25, on my 25th birthday. I think I was in Mexico May 30, came back on June 6.”

It was then, seven years after they began dating, that Mileidi and her girlfriend were finally able to tie the knot.

A detour on the citizenship path

Now that she’s married to a US citizen, Mileidi should be able to pursue citizenship, but being LGBT adds another layer of complication.

“[My wife] didn’t come out to her parents until really like two years ago. She really struggled a lot with her identity and how her parents would react,” Mileidi said. “For five years of our relationship, her parents had no idea we were together. … For me, that means difficult immigration processing.”

Other couples have family vouch for them, wedding pictures, proof that they share a residence, even being on each other’s insurance — but when one spouse is not out, some of that proof can be hard to come by to present to immigration authorities.

“I’m really scared, actually,” Mileidi said. “We don’t know if this is going to be different because we’re gay.”

Mileidi first came to the US from Mexico at age 3 with her mother and older sister. Her father, brother and eldest sister were already here. At age 7, she returned to Mexico to help care for her grandmother, and within the year, her mother passed away. Her father decided to take her back to the US. That border crossing she remembers — walking in the cold desert nights; sometimes traveling by car, hunched on the floorboard until her legs fell asleep; hiding out in Underground Railroad-style stops for immigrants.

At 13, her eldest sister and her husband, citizens by this time, became Mileidi’s legal guardians, requiring her to move from her largely undocumented community off Buford Highway to the “not necessarily undocumented-friendly” Gwinnett County.

“I remember filling out tests, like those standardized tests where they ask for your social security number and just feeling horrified and wondering if anybody could see that I wasn’t filling it in. I felt very judged,” she said. “Any time anybody asked a question about a social security number I could just feel myself just like, getting red and wanting to disappear.”

The politics of Dreaming

Carrie Johnson, justice correspondent for NPR, reported that as of Sept. 6, the Department of Homeland Security was not accepting new applications.

In Congress, the DREAM Act — House Resolution 3440 and Senate Bill 1615 — was introduced in July to authorize the government to stop deporting Dreamers, according to HRC. As of press time, the DREAM Act, sponsored by Sen. Lindsey Graham (R-South Carolina) remained in the Senate Committee on the Judiciary.

The act seeks to “authorize the cancellation of removal and adjustment of status of certain individuals who are long-term United States residents and who entered the United States as children.”

Mileidi said Congress will pass the bill because it’s in their best interest.

“You have to be some kind of hateful human being to see the amount of money that, just for the DACA recipients — I think the figure is $460 billion — that gets put into the US economy,” she said. “You have to be fooling yourself and everybody else if you continue to say that we’re not contributing to the economy, and they know that they’re lying.”

She said even the president acknowledged that DACA recipients pay taxes and pay into social security, helping bump up the program even though they will likely never see a penny of it.

“We’re not gonna stop fighting until we get the basic human rights that we deserve. You can pass it now and make this easier on yourself and everybody else around you, or you really are going to get the fight of your life,” Mileidi said. “Once you get even a little taste of what it’s like to be a human being, you’re not getting pushed back. I’m sorry, but I’m not going to go back to just surviving. I’m going to exist. It’s my right to.”