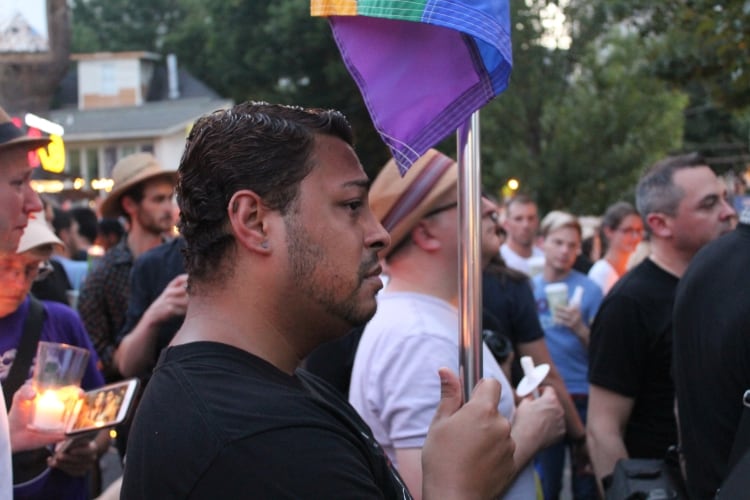 A year ago this month, Atlanta’s LGBT community converged on the intersection of 10th Street and Piedmont Avenue to celebrate the U.S. Supreme Court decision striking down same-sex marriage bans nationwide. On Sunday evening, the community came back to the same spot to mourn.

Over 1,000 people attended the candlelight vigil in honor of the victims of the Sunday morning shooting at LGBT Orlando nightclub Pulse that left 50 dead and 53 injured. Those in attendance cried, sang and vowed not to give in to fear in the wake of the worst mass shooting in U.S. history.

Around 150 people gathered for a vigil earlier in the evening in the parking lot outside of Burkhart’s at Ansley Square shopping center (photo gallery below).

“Let’s just take a moment of silence for those we’ve lost,” said GlitterAnn B Gay of the Sisters of Perpetual Indulgence, the group who organized the event. “May our cause gain momentum to change what has to be changed.”

Officer Eric King, one of the Atlanta Police Department’s LGBT liaisons, was in attendance, while a handful of officers from the department’s APEX unit stood by keeping watch on the gathering. APEX, incidentally, replaced the APD’s controversial Red Dog Unit, which was dissolved in early 2011 amid accusations of misconduct—notably the September 2009 raid of the Atlanta Eagle.

But the biggest gathering of the evening was in the parking lot of TEN Atlanta later that evening, where police ended up shutting down 10th Street between Juniper Street and Piedmont Avenue to accommodate the overflow crowd.

The crowd broke out in an impromptu and emotional version of the Star-Spangled Banner before comments were made by Matt Garrett of the Human Rights Campaign’s Atlanta Steering Committee and Ames Simmons, a member of the HRC’s national board of directors.

Attention then turned to the Atlanta Freedom Bands, who played a stirring, somber piece by Pavel Tchesnokov called “Salvation is Created.”

“This powerful, emotional piece of music represents our grief from the shootings, our sympathies expressed for the victims and their loved ones, and our hope for a future free of horrific events like these,” the group later wrote on their Facebook page.

Music was a regular source of healing throughout the day, and if people thought they heard Macklemore & Ryan Lewis’ 2013 LGBT anthem “Same Love” back on the airwaves in Atlanta, they were right. Rodney Ho, the AJC’s TV and radio reporter, tells us that Star 94 played the song every hour through midnight Sunday night. Ho says the station was the only one in the nation to do so.

The police presence was heavy as a precaution against a similar attack happening to Atlanta’s LGBT community in the wake of the Orlando shooting. Officer King and other patrol officers as well as officers from the APEX unit stood watch, and the APD confirmed that plainclothes officers from the Department of Homeland Security were scattered throughout the crowd.

And as the crowd thinned out, candles remained lit on the ground outside TEN spelling a simple but powerful message: Atlanta hearts Orlando.

The City of Orlando has posted a list of victims of the Pulse nightclub shooting and is updating it as the victims are identified and their next of kin are notified. 36 of the 50 names have been released, and the victims range in age from 19 to 50 years old.

Equality Florida, the state’s LGBT civil rights organization, started a GoFundMe campaign to raise funds for the victims and families affected by the shooting. $1.6 million has been raised so far, with an overall goal of $2 million.

Another Atlanta event to honor the Pulse victims is scheduled for Tuesday night at the Center for Civil and Human Rights, put on by a coalition of over 25 different organizations.

Take a look at our photo galleries from the Burkhart’s and TEN Atlanta vigils below.

Vigil outside Burkhart’s at 7 p.m.: