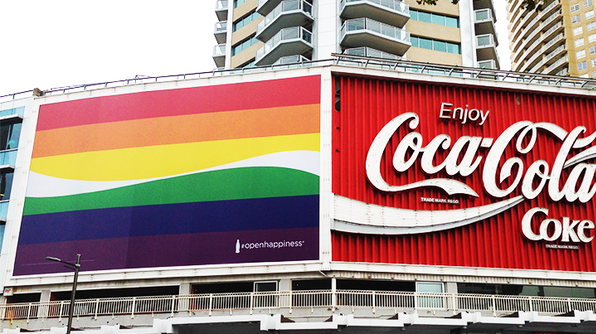 It’s the last day of the Georgia legislative session and there are still chances for the “religious freedom” bill to pop up as an amendment to another bill. So nothing is final until midnight.

But the last day of the session brings Coca-Cola to (kind of) finally make a statement against the controversial bill as businesses all over the country are decrying a similar bill that was passed and signed into law in Indiana.

Here’s the statement from Coca-Cola:

Coca-Cola does not support any legislation that discriminates, in our home state of Georgia or anywhere else. Coca-Cola values and celebrates diversity. We believe policies that would allow a business to refuse service to an individual based upon discrimination of any kind, does not only violate our Company’s core values, but would also negatively affect our consumers, customers, suppliers, bottling partners and associates. As a business, it is appropriate for us to help foster diversity, unity and respect among all people.

We advocate for inclusion, equality and diversity through both our policies and practices. Coca-Cola does not condone intolerance or discrimination of any kind anywhere in the world.

This is much more definitive than what the Atlanta-based company told the Georgia Voice a few weeks ago when it simply pointed us to its “Statement on Diversity”—a far different stance than its strongly-worded statement on “religious freedom” bills last February.

From its statement last year:

“Recently, legislation in some states in the United States was proposed that we believe is discriminatory against gay, lesbian, bisexual, and transgender (LGBT) people and others … We believe legislation that would allow a business to refuse service to an individual based on LGBT, or any other, status not only violates our Company’s core values, but would negatively affect our consumers, customers, suppliers, bottling partners and Associates.”

When the Georgia Voice asked Coca-Cola for its stance last month on “religious freedom” bills, the company issued a tepid response saying it now has a “Statement on Diversity.” Gone were any references to “legislation” and in its place is the word “policies.” That statement no longer appears on the company’s website.

“Better Georgia has asked for a public statement since January but Coca-Cola was silent throughout the fight. While the company claims to have been negotiating privately behind closed doors, we don’t believe equality should be a bargaining chip for roads or any other business interest,” says the group’s executive director Bryan Long. “We welcome Coca-Cola’s statement but we’ll remember that they were silent until after the bill sponsors waved a white flag.”

Coca-Cola’s public statement has got to be good news for Georgia Equality, which has spent the entire session fighting the “religious freedom” bill; its annual Evening for Equality on June 20 is sponsored by the beverage company. Also, Coca-Cola is a major sponsor for HRC Atlanta’s annual dinner and gala set for May 2. And, yes, Coca-Cola has been a major sponsor of Atlanta Pride for many years, including a huge presences in the annual parade.