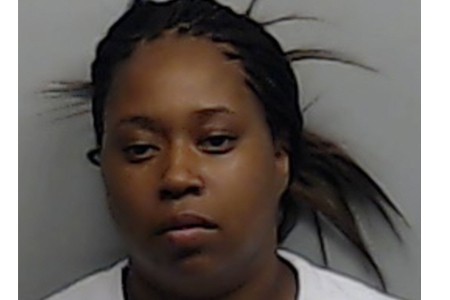 A woman accused of killing her estranged wife in a fit of jealousy was sentenced to life in prison last week.

Danielle Alexis Parker, 32, was sentenced to life for the killing of East Point Corporal Crystal Parker on July 4, 2013. Danielle Parker pleaded guilty Nov. 5, the day jury selection was to begin in her trial. Danielle Parker was charged with murder, felony murder, aggravated assault, and possession of a firearm during the commission of a felony. Crystal Parker was a seven-year veteran of the department.

“According to the investigation, jealousy was the apparent motive for the murder. Defendant Parker and the victim had separated in December 2012, but the victim allowed the Defendant to remain in the home until she could find a place to live,” according to a press release from the Fulton County District Attorney’s Office.

“However, at the beginning of June 2013, the victim asked the Defendant to move out permanently. The victim later began dating another woman. Defendant Parker was enraged because of the victim’s new relationship. Just one day after the victim returned from a trip to visit her new girlfriend in Florida, the Defendant shot and killed Corporal Parker using the victim’s personal handgun. The victim’s gun and cell phone were never recovered,” the press release further states.

During a preliminary hearing on July 31, 2013, Det. R. Hudson from the Fulton County Police Department described how Crystal Parker was found in her bed with a bullet wound to the back of her head. Crystal Parker’s two-story home is located on Creel Road in unincorporated Fulton County.

Hudson said the wound was a “close contact” wound, meaning the gun was either pressed against Crystal Parker’s head when fired or no more than an inch away. There did not appear to be a struggle nor was there forced entry into the home, he said.

Although the two had broken up weeks before, there was still some intimacy taking place. According to testimony, Danielle Parker was at Crystal Parker’s home the night of July 3 when Crystal Parker finished her shift with the East Point Police Department at midnight. Crystal and Danielle spent the night together at Crystal’s house.

Police also interviewed a man who wanted to date Danielle Parker. Danielle Parker told him she was going to Crystal Parker’s home to retrieve her gun and gun license as well as some other personal belongings. While on the phone with him, Danielle Parker allegedly said, “This motherfucker just woke up.” The man said he told Danielle to leave the house.

And then, according to the prosecution, “something happened.”

“We know that they spent the night together on July 3 and the next morning Crystal called her new girlfriend in Florida,” said Fulton Assistant District Attorney Ana-Helena R. Allen at the July 31 hearing.

“That morning of the 4th of July, something happened and Crystal ended up dead in her own bed. Something happened over the summer that led the two to break up,” Allen added. Like many adult relationships, sometimes letting completely go wasn’t very easy, Allen explained.

With Crystal Parker, Danielle Parker led a life filled with plenty of money —they had to two joint banking accounts — lived in a nice home and the two took lots of trips together.

“But for all intents and purposes they were over and Danielle Parker was now living in her little brother’s bedroom in her mother’s home and with no car,” Allen said. “And the next thing you know [on July 4] she moves money from Crystal’s account to their joint account and goes about her business running errands and never reports anything.”

He also testified that Crystal Parker’s girlfriend in Florida stated she received Facebook notifications that she believed were coming from Crystal but were vulgar and sexual in nature and not the typical language Crystal used with her.

Domestic violence, or intimate partner violence (IPV), is a major issue within the LGBT community. A groundbreaking study by the Centers for Disease Control & Prevention shows that lesbians and gay men reported IPV and stalking victimization (including text messaging, emails and GPS) over their lifetimes at levels equal to or higher than those of heterosexuals.

The CDC study is based on data gathered from the very first National Intimate Partner and Sexual Violence Survey (NISVS), conducted in 2010. In 2013, the CDC released an analysis of the data from respondents who identified as lesbian, bisexual or gay.

“The report just goes to show violence affects everyone regardless of sexual orientation,” said Mikel Walters, PhD, an author of the study who works in the CDC’s Division of Violence Prevention.

Data like this has never been collected before, Walters explained, and it gives a strong foundation for further research in this field.

Transgender people were not included in the study, Walters said, because not enough people identified as such in the survey. But she said there is definite interest in gauging intimate partner violence in the transgender community because “we do recognize that as a community their victimization is not highlighted, especially at the national level.”