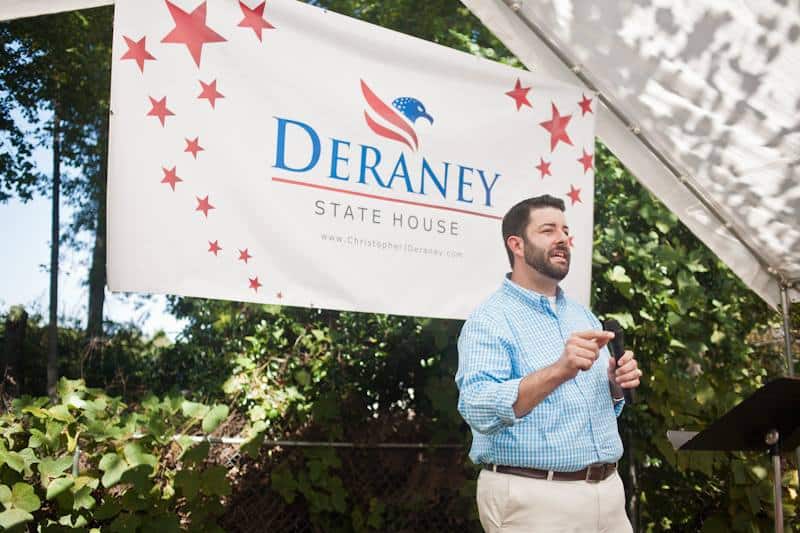 You’d be hard-pressed to find two words that make many LGBT people see red quicker than “gay Republican.” But political new-comer Christopher Deraney is shaking off the criticism and making a run as an openly gay Republican for Georgia State Representative in District 78.

Deraney faces no opposition in the May 20 Republican primary, and therefore will face off against incumbent Democrat Demetrius Douglas in the November general election. If he wins, he would be the first openly gay man elected to the Georgia state House—former Rep. Rashad Taylor didn’t come out as gay until after he was in office.

The Log Cabin Republicans were quick to endorse Deraney after his announcement. “As the Deep South’s first openly gay Republican to run for state legislature, Mr. Deraney recognizes that liberty is a right that every individual should enjoy, including our gay and lesbian citizens,” said Jamie Ensley, president of the Georgia Log Cabin Republicans, in a press release.

House District 78 includes southeast Clayton County and parts of Henry County as well as portions of Jonesboro and Stockbridge and all of Lovejoy.

But Deraney has a long road ahead, considering that as of a March 31 disclosure report, he had raised only $975 versus $11,993.46 raised by his opponent, state Rep. Douglas.

FAITH AND CHOICE
“I’m not your daddy’s Republican,” Deraney tells the GA Voice.

The 33-year old Fayetteville native was raised in a Christian household and his religion remains a vital part of his life, saying that his “faith is [his] world.”

While it’s Deraney’s sexual orientation and political affiliation that are making people’s heads turn in this race, his path to the ballot stands out as well. Deraney was a professional opera singer until a near-fatal 2011 car accident left him unable to continue performing at that level. He moved on to a job with Delta Air Lines, and now looks to have his voice heard in a much different way by entering public service.

He acknowledges the difficulty gay men have had winning elected office in and around metro Atlanta, saying, “If I had to guess I would say it’s an image thing. It’s how people here in the south perceive masculinity vs. femininity.”

When asked to cite his conservative bona fides, Deraney mentions his strong support for constitutional rights, and considers him- self “fiscally very conservative.”

“People want to work for their money and they want to keep it. We’re just taxing and spending people,” he says. “It’s slowly coming back around, but it’s not going to get back to the boom years if we keep taxing the hell out of everybody.”

He’s also pro-life, but unlike most male Republicans with the same position on abortion, Deraney has personal reasons for his view—he was adopted.

“I don’t have the right to tell people what to do with their body, but I also know I was given a shot at life by someone placing me up for adoption instead of the alternative,” he says. “I know Republicans have shot themselves in both feet with how they respond to that, but I know there is a time and a reason for everything. It’s not black and white.”

ON TRANS RIGHTS AND ‘RELIGIOUS FREEDOM’
In the “Equal Rights” section on his campaign website, he includes age, gender, origin and sexual orientation, but noticeably leaves out gender identify.

However when questioned about it, Deraney says he supports trans rights. “The statement on my website is an umbrella statement covering basic groups. However, because I do support trans rights, I am willing to readdress it more finitely,” he explains.

Regarding the anti-gay “religious freedom” bills that failed in this year’s legislative session, and which are bound to come back up again in 2015, Deraney believes it should be a business owner’s right to serve or not serve whomever they want, just as it’s up to consumers whether to patronize a business.

“But the wording of the bill was ambiguous and left the door open to discrimination,” he says. “If they’re going to pass a bill like that, we have to make sure it’s worded so it doesn’t encourage or promote further discrimination.”

LGBT BACKLASH AND GOP FUTURE
Soon after Deraney’s announcement last month that he was jumping into the race, the backlash of LGBT voices in comments sections and message boards began, with some calling him “blind” and a “masochist.”

Deraney has seen and heard it all, calling it “quite an eye opener” and saying he doesn’t see the logic in wishing for acceptance on the one hand, while being intolerant of certain people on the other.

The candidate foresees a future where his party comes around on LGBT issues, causing a significant number of those in the LGBT community to switch to the Republican Party.

“I think it’s just going to take a handful of us gay Republicans who are willing to put our necks on the line to be the whipping boy to make that happen. It’s not going to be an easy road, but it will happen,” he promises.

And if it doesn’t happen?

“Then you’re not going to have a Republican Party anymore,” he says.