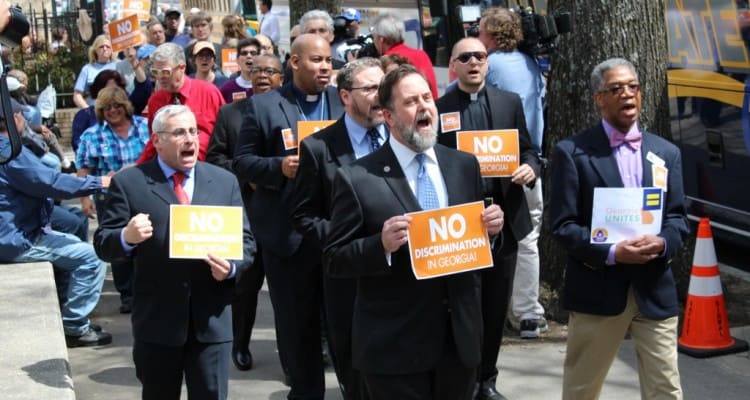 Georgia companies: For real, we oppose the ‘religious freedom’ bill

Several heavy-hitting Georgia-based companies have reiterated their opposition to a so-called “religious freedom” bill in the wake of state Sen. Josh McKoon's (R-Columbus) recent claims that they are trying to impose their “liberal, far-left cultural norms” on the state's citizens. McKoon is the author of the bill that has failed in the legislature the last two years, with hopes that the third time's the charm when he proposes it again in January.

The responses were triggered by McKoon's comments in a recently unearthed video blasting the corporations.

“We’ve had this problem because very large multi-national corporations that are headquartered in this state – their executives, many of whom are not from Georgia, have different values than you and I do,” he said. “They think that their cultural norms, their liberal, far-left cultural norms, should be applied to our state. They think that they ought to be able to use the awesome power of government to do that. And that is why we have had the problem that we’ve had.

“…When you start telling me that our individual civil liberties are somehow a business issue, we’re going to have a serious problem.”

The AJC rounded up statements from the corporations, which don't address McKoon directly.

Delta said this week it is “proud of our diverse work force and customer base and will continue to oppose policies that would allow discrimination against any of our employees and customers.”

Sandy Springs-based UPS responded that it “does not support legislation at the federal or state level that is contrary to our longstanding culture of valuing diversity, inclusiveness and equal opportunity.”

Coca-Cola stuck to an earlier statement, saying it “does not support any legislation that discriminates, in our home state of Georgia or anywhere else…. We believe policies that would allow a business to refuse service to an individual based upon discrimination of any kind, does not only violate our company’s core values, but would also negatively affect our consumers, customers, suppliers, bottling partners and associates.”

We still have four months of this before the bill can even be introduced, if anyone's counting, so settle in and get comfortable, folks.