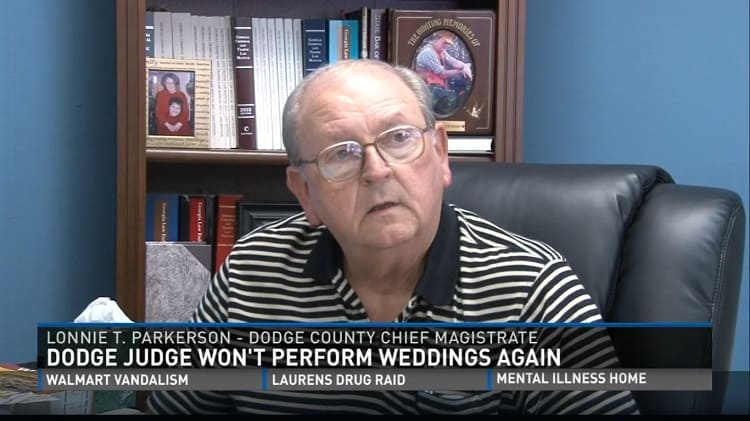 A magistrate judge in central Georgia says he would rather not perform any weddings at all than be required to perform weddings for same-sex couples, so he’s out of the marriage business.

According to 13WMAZ, Dodge County Magistrate Judge Lonnie T. Parkerson made the announcement during a wedding for an opposite-sex couple, saying he was moved to do so after two women came in to get married.

“I want y’a’ll to know you’re the last wedding that I’m ever gonna do,” Parkerson says in a video sent to the station. “They were already scheduled so I’ll do them too. I just can’t do it the other way, y’all, it ain’t right. The Bible explains it just like that [snaps)] what marriage is. That is a marriage right there [points to couple getting married]. What came in my office the other day was two ladies, it’s not a marriage.”

The couple Parkerson was marrying nodded in agreement, saying “Amen.”

Parkerson, who is a banker by profession and in his third term as magistrate, confirmed his decision to 13WMAZ in a statement:

I’ve been approached about a wedding I performed yesterday and about two weeks ago I had some people come in the office and asked me to do a wedding and I’m not doing weddings any more since the Supreme Court passed the law that they did. I’m not marrying anybody but I did this wedding yesterday because it has been scheduled for about two weeks before the Supreme Court came out with their decision and that’s the reason the wedding was done yesterday and I even told the people in the courtroom where I married them that that would be the last wedding and the only reason that that was done was because it was already scheduled beforehand. And that’s the reason it was done and no other reason. There won’t be anymore done by this office and by me or any of my personnel.

Georgia House Speaker David Ralston (R-Blue Ridge) told fellow Republicans on Saturday that he plans on advocating for a “pastor’s protection act” in the 2016 legislative session. The bill would prevent clergy from being forced to perform same-sex marriages, even though constitutional scholars say this protection is already afforded them under the First Amendment of the U.S. Constitution.