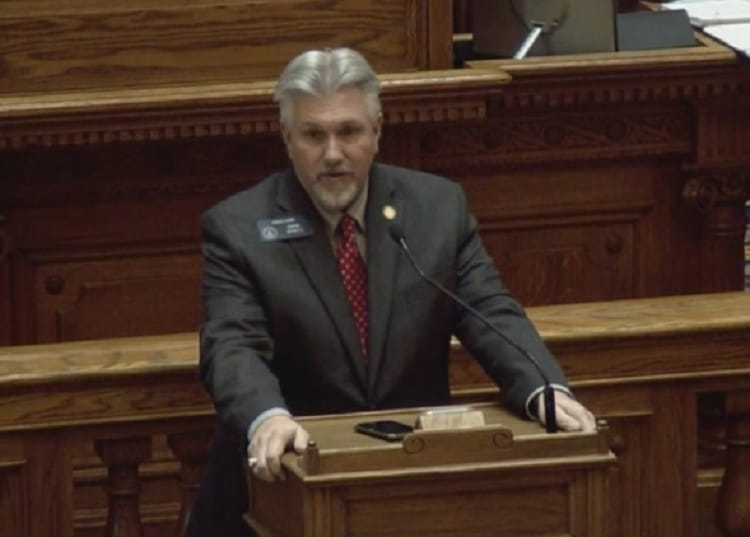 The Georgia Senate passed a hybrid so-called “religious freedom” bill Friday along party lines 38 to 14 after three hours of lively debate, leaving Georgia companies bracing for a possible boycott on the scale of what happened when Indiana passed a “religous freedom” bill last year. The bill now goes to the House for final approval. House Bill 757, Rep. Kevin Tanner’s (R-Dawsonville) “Pastor Protection Act,” had been considered one of the least discriminatory of all the “religious freedom” bills currently under consideration—that is until a Senate Rules Committee hearing on Tuesday.

During that hearing, the bill was amended to include the anti-gay guts of the much more controversial First Amendment Defense Act. Sen. Greg Kirk’s (R-Americus) bill would allow faith-based organizations that receive tax dollars to refuse services to same-sex couples. Local and national LGBT groups including Georgia Unites Against Discrimination, SOJOURN, Freedom For All Americans, Human Rights Campaign and GLAAD all criticized the move in the following days.

A motion was made in the Friday morning session to engross the bill, i.e. allow the bill to pass without any amendments, leading to objections from several senators including Sen. Vincent Fort (D-Atlanta), Sen. David Lucas (D-Macon) and Sen. Nan Orrock (D-Atlanta).

“There is great irony in debating bringing a bill on religious freedom to the floor at the same time we’re taking away the freedom of 56 people to debate a bill,” Sen. Fort said. “If this is a good bill, if this is a bill that you think the people of the state of Georgia support, why don’t you debate it and discuss it?”

Sen. Kirk spoke out in favor of engrossment, claiming that by doing so they weren’t closing off debate, just not allowing amendments. The motion to engross passed 36-19.

The Senate reconvened after a recess for lunch, when Kirk attempted to refute criticism of the bill, claiming that corporations will still be able to enforce their non-discrimination policies and that it does not discriminate against the LGBT community.

“It only impacts the government’s interactions with faith-based organizations and individuals,” he said. “We as a state are full of hospitality and we have room for all people. This legislation is about equal protection and not discrimination.”

Of the criticism from LGBT activists, Kirk claimed, “This bill protects the constitutional rights of individuals and faith-based organizations in Georgia. This bill takes nothing away from  same-sex couples and the LGBT community.”

Kirk’s claims were met with immediate reaction from LGBT activists and constitutional scholars.

This bill is NOT a “live and let live” bill. It prohibits government from stopping anti-LGBT discrimination. That’s shameful. #gapol

Contrary to Sen. Kirk's assertion, FADA does not ensure = protection–it violates it. It targets same-sex couples for discrimination. #gapol

Q: Would hate groups be protected under #FADA if they identify as faith-based?
A: If it says so in their governing docs, yes. #GApol #LGBT

There was a bizarre exchange between Kirk and Sen. Emanuel Jones when Jones pointed out that the Ku Klux Klan could be a considered a faith-based group and therefore would receive protections under the bill. Kirk referenced what appeared to be a nod to the Black Panther Party by singer Beyoncé during halftime of the Super Bowl, and compared the Black Panthers to the KKK. Kirk later took the floor again after media outlets picked up on his comment, saying he doesn’t condone the criminal behavior of organizations like the KKK.

Sen. Elena Parent (D-Atlanta) took to the well and went through a laundry list of concerns about the bill, saying it does discriminate against the LGBT community, it only respects the opinions of those who believe marriage should be between a man and a woman and it violates the equal protection clause of the U.S. Constitution.

“FADA sanctions discrimination against single mothers, unwed couples, interfaith couples, and interracial couples,” Parent said. Referencing the overreach of the bill, she added, “One could refuse to marry two short people if their view is a sincerely held belief.”

Sen. Josh McKoon (R-Columbus), whose own “religious freedom” bill has stalled in the House Judiciary Committee, and Sen. Charlie Bethel (R-Dalton) both hit back at Parent’s claims in one of the more lively back-and-forths of the session.

“Freedom of religion is a dearly held American value,” Parent responded. “But we cannot favor one viewpoint over another.”

Sen. Orrock then spoke out against the bill, criticizing the swift way the bill made it to the Senate floor for a full vote with no amendments allowed, saying, “Disabuse yourselves of any notion that this has been vetted and that the input has been made and has been weighted and considered. ”

But she saved the majority of her comments to talk about the economic hit the state could take if the bill is passed, citing the uproar over passage of a “religious freedom” bill in Indiana last year. Orrock also noted a series of the business community’s objections to such bills in Georgia, saying, “Important parts of our state economy are begging and pleading not to pass this bill.”

Orrock grew more animated as she talked about the LGBT community, saying, “Untold numbers of gay, lesbian and transgender people are holding their breath in fear that we will pass this legislation. It says to them you’re vulnerable, you’re on your own. And this is after hundreds of years of discrimination. We’re moving toward fully acknowledging the concept that LGBT people are persons under the law with all the full protections of the law, it’s called equal protection under the law.”

Orrock called the bill “open season” on LGBT people and compared a vote for it to how Southern states fought back against the U.S. Supreme Court ruling Brown vs. the Board of Education, which integrated schools in the early 1950s.

“I would ask us to search our souls and do the right thing. Be able to tell your grandchildren that you didn’t vote for state-sanctioned discrimination,” Orrock said. Sen. Fort seconded Orrock’s comments on the economic hit, saying that Georgia would face “a hurricane of boycotts” if HB 757 passed.

Sen. Gloria Butler (D-Stone Mountain) later talked about the discrimination she’s faced as an African-American and cited the cases of Robin Shahar and Vandy Beth Glenn. Shahar had a job offer rescinded by the attorney general’s office after it was discovered she is a lesbian. Then-Attorney General Mike Bowers claimed that Shahar’s sexual orientation would prevent her from enforcing the state’s sodomy law. Shahar sued Bowers but lost. Glenn was fired from her job as a legislative editor in the Georgia General Assembly after she informed her employer she planned to transition from male to female. She won her lawsuit.

“These are real people who experienced real discrimination in and by the state of Georgia,” Butler said. “No one in Georgia should have to spend years fighting for basic equality under the law. Every single person should be born with equal rights and equal protections,” then wrapping up her time in the well by saying, “Religious freedom is not in danger and should not be used as a shield for state-sanctioned discrimination.”

Sen. Steve Henson (D-Tucker) criticized the handling of FADA when it was a standalone bill, citing the numerous times that hearings were canceled and rescheduled.

Senate Majority Leader Bill Cowsert (R-Athens) downplayed what happened when FADA and PPA were combined on Tuesday, saying the Senate Rules Committee simply “Expanded the protections to extend from clergy to faith-based organizations and individuals,” which went just about as well as you would think it would with LGBT activists.

.@BillCowsert is flat-out lying when he says this is the same bill that passed the House. It is nothing like it. #gapol

Sen. Kirk wrapped up the debate by saying that those who believe in marriage equality should have tolerance for those that don’t, and that HB 757 ensures there would be no discrimination for any Georgian for their views on marriage.

The vote came a day after a poll was released showing that two-thirds of Georgia residents support LGBT non-discrimination laws in employment, housing and public accommodations and only one-third support businesses being able to deny services to LGBT people based on their religious beliefs.

LGBT groups immediately started calling on people to contact their representatives in the House:

And threats of a boycott followed as well.

Georgia is poised to pass a huge bill allowing for discrimination against same-sex couples.#boycottGeorgia

“Senate Republicans manipulated the rules to sidestep public input. They know that a majority of Georgians do not believe in discrimination and exclusion. Those aren’t our values. That’s not who we are.

“If this piece of legislation is signed in to law, millions of hard-earned tax dollars will be spent to get the radical right’s paw prints out of the henhouse. This bill is not only an attack on the dignity of LGBTQ families, but an attack on all families and an attack on our state’s reputation. This bill is bad business and nothing more than a vulgar political stunt wielded by politicians who want to erase the progress we’ve made as a country.

As did Freedom For All Americans:

“Georgia lawmakers supporting this legislation are making a grave error that damages their state’s brand. Today’s Senate vote is noticeably out of step with the overwhelming majority of Georgians who disagree with this type of discriminatory legislation,” said Matt McTighe, Freedom for All Americans executive director. “We urge lawmakers in the House to reject this dangerous bill. This legislation sends a clear message to the nation that Georgia views LGBT people, single mothers, interfaith and interracial couples and a host of others as unworthy of equal treatment under the law. This is a dangerous path for lawmakers to go down.”

“H.B. 757 is a shameful and irresponsible bill that would create broad loopholes and put LGBT Georgians in real danger of discrimination,” said HRC President Chad Griffin. “The freedom to practice one’s religion is a core American value, and that’s exactly why it’s protected under the First Amendment of the U.S. Constitution. That’s why it’s so disingenuous to claim H.B. 757 is anything other than an attempt to license discrimination. House leadership should listen to the business and religious community leaders who have opposed this bill because of what it truly is: an unacceptable attack on LGBT people, single parents and unmarried couples.”

“It’s outrageous that Senate leaders have not adhered to the standard practice of vetting legislation through traditional committee hearings with appropriate notice and public debate. Instead they have resorted to legislative shenanigans such as canceling hearings, moving hearing times throughout the day and using arcane legislative rules to limit debate and restrict democratic principles,” said Jeff Graham, Executive Director of Georgia Equality. “It’s clear that Senate leadership knows their actions will hurt families and Georgia’s economy. They are hoping that their legislative shell-game will divert attention from their true intent, which is to pander to religious extremists in an effort to win votes in the upcoming primary elections.”