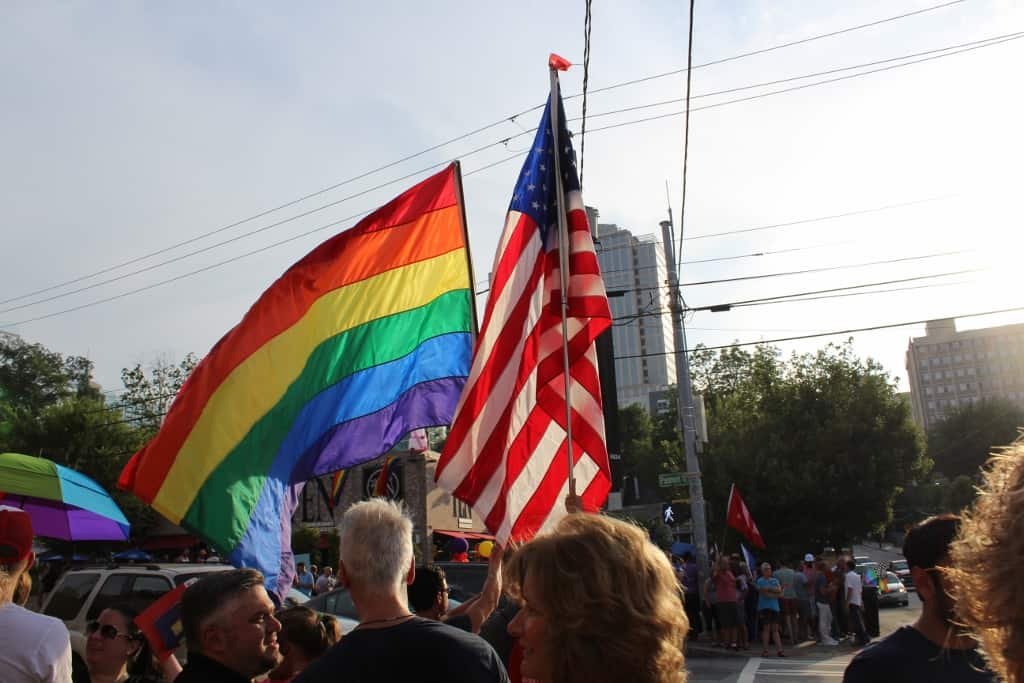 The nonpartisan Public Religion Research Institute released a new survey Thursday showing that two-thirds of Georgia residents support laws that would protect LGBT people against discrimination in employment, housing and public accommodations, and just one-third support allowing small business owners to deny service to gay and lesbian couples based on their religious beliefs.

The survey’s overall findings are based on 42,000 interviews conducted with Americans from May through December of last year, where they found that 53 percent of Americans support allowing same-sex couples to legally marry, while 37 percent are opposed. 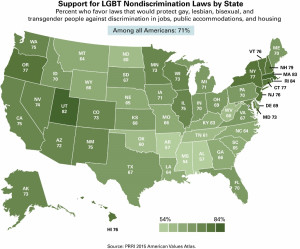 The survey is timely considering the slew of so-called “religious freedom” bills currently under consideration in the Georgia legislature, in particular state Rep. Kevin Tanner’s (R-Dawsonville) House Bill 756, which would allow business owners to refuse service to same-sex couples based on religious grounds—the exact same practice that just a third of Georgia residents support based on the survey results.

And critics of Sen. Greg Kirk’s (R-Americus) First Amendment Defense Act list a slew of ways the bill could lead to discrimination against the LGBT community in a variety of areas—the same practice that two-thirds of Georgia residents oppose. Kirk’s bill passed out of the Senate Rules Committee on Tuesday and is scheduled to hit the Senate floor for a full vote in Friday morning’s session. The bill was also combined with the more tame Pastor Protection Act.

The support for LGBT non-discrimination laws by two-thirds of Georgians is interesting when you consider the brick wall lesbian state Rep. Karla Drenner (D-Avondale Estates) has repeatedly hit the past several years trying to get the Fair Employment Practices Act passed—a bill that would prohibit discrimination based on sexual orientation against state employees only. The bill was introduced again last year and lingers in the House Judiciary Committee, yet to receive a hearing.

And Rep. Drenner is a sponsor of the Georgia Civil Rights in Public Accommodations Act, a bill that would prohibit discrimination in public accommodations based on race, color, religion, sex or national origin only. Rep. Taylor Bennett (D-Brookhaven) twice tried to include sexual orientation and gender identity (along with disability, age and veteran status) but was thwarted both times, only managing to get sex included. The bill passed out of committee on Feb. 9 and awaits a full vote in the House. So goes the state of the Georgia legislature in 2016 when trying to add protections for LGBT people.

Age is a major factor in one’s support for marriage equality, with over 70 percent of those aged 18 to 29 in favor, while that percentage drops to 41 percent support by those 65 and older. Also women were more likely to support it than men, and among racial and ethnic groups, Asian or Pacific Islanders gave it the most support (64 percent) while African-Americans gave it the least (43 percent).

It was mirror opposite results when looking at political affiliation, with two-thirds of Democrats in favor of marriage equality and six in ten Republicans opposed.

As expected, marriage equality is supported the least in the South, with 46 percent in favor, while the Midwest (54 percent), the West (59 percent) and the Northeast (63 percent) were more likely to approve.

Georgia was able to avoid being one of the five states in the nation where a majority of residents oppose marriage equality—Mississippi, Alabama, Arkansas, South Dakota, Tennessee nabbed that distinction. Overall 45 percent of Georgia residents favor it, 47 percent don’t and 8 percent don’t know or refused to answer.