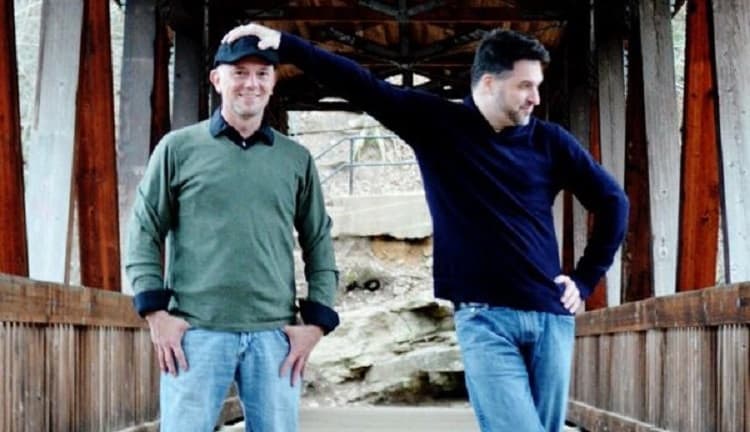 Today’s the final day to help vote two gay Atlanta men the “First Couple of 2016” as they get married in Times Square as part of a tuxedo company’s nationwide contest.

Alexander Eisele (left in photo above) and Michael Westbook (right) met on the dancefloor at the Heretic in 2007 according to the AJC. A surprise proposal followed at this year’s Atlanta Pride and now they face off against a straight Florida couple to win the contest and get married on the main stage in Times Square as the ball drops.

And who will the officiant be should they emerge victorious? None other than George Zimmer, the Men’s Wearhouse founder who spent years assuring you that “you’re gonna like the way you look.” Zimmer was ousted by the company in 2013 and is now head honcho at Generation Tux.

The winning couple will also get the five-star treatment with a week-long honeymoon at Moon Palace & Golf Resort in Cancun, Mexico. Here’s a snippet from their contest page:

Through their love of music and each other, Alexander and Michael have stood the test of time and come out stronger than ever. Having fallen in love over ten years ago, and making it through some of life’s difficult situations, they always knew they wanted to be at each other’s side through thick and thin. Ready to take the next step once marriage was declared legal for all, a surprise proposal at an Atlanta Pride event was just the first big step in this love story of epic proportions. As our culture has evolved, Atlanta’s-own Alexander & Michael have continued to grow together, and it’s clear they’re ready to outdo their own proposal with a live ceremony on stage this New Year’s Eve in Times Square.

Voting runs through 8:35 p.m. tonight so get your vote in now and help LGBT Atlanta represent tonight in Times Square!