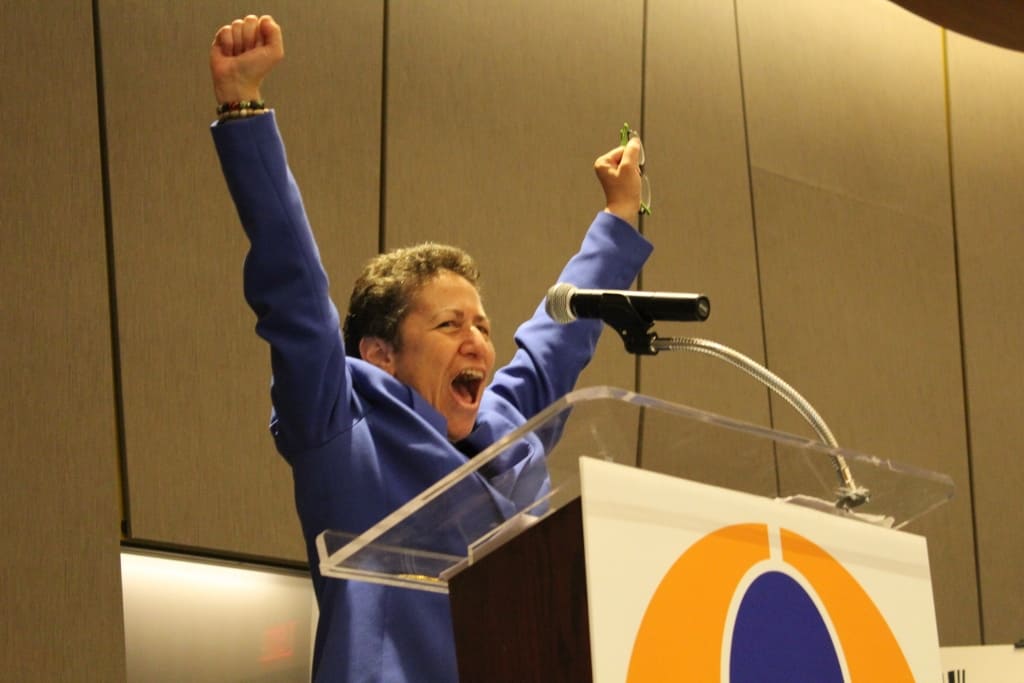 A brief patch of rain didn’t stand a chance of dampening spirits Friday as several hundred people, including local politicians, plaintiffs and attorneys from Georgia’s marriage lawsuit and other community leaders, gathered for a rally to celebrate the U.S. Supreme Court striking down same-sex marriage bans nationwide. The event, hosted by Georgia Equality and Freedom To Marry, was held at the National Center for Civil and Human Rights in downtown Atlanta.

RayShawn Chandler, one of the plaintiffs in the Georgia lawsuit, noted that her wife Avery couldn’t be there because she is deployed overseas as a member of the U.S. Army.

Chandler spoke of the perseverance of the LGBT community, saying, “It is a fact that we have all been so focused on fulfilling a dream of ours, to be accepted and respected. We were aware of the odds but we were not hindered by it. It was seeing other risk it all that increased our faith. It was taking hits but getting back up again. We understood what it meant to be there for one another. We were focused on winning, but we didn’t want the type of victory that meant losing in certain states. No, we wanted the type of victory that made everyone around us believe in possibilities again.”

The crowd broke into cheers as Garner and Morrison, who married in Massachusetts five years ago, clasped hands and Garner said, “Today in the great state of Georgia we are recognized as legal wife and wife.”

The rain arrived halfway through the event, sending everyone inside the Center to continue the rally, and when the skies cleared everyone moved back outside, with organizers seamlessly continuing the day’s festivities.

One surprise moment came courtesy of Atlanta City Council Member Alex Wan, who proposed to his longtime partner Joe Bechely. Wan said he didn’t have a ring because he thought the Supreme Court announcement would happen on Monday, but a woman in the crowd handed him one. Wan promptly invited Bechely up onstage and got down on one knee to make it formal. Cheers rang out as Bechely said yes and the couple kissed.

Jeff Graham, executive director of Georgia Equality, noted the gravity of the day’s news but also made a point to recognize that the funeral of Clementa Pinckney was occurring that same afternoon. Pinckney was the pastor and South Carolina state senator who was gunned down along with eight other African-Americans by a white man who told police he wanted to start a race war.

“That act of hatred was not just senseless, it was because racism and bigotry and hatred do still exist in the South, in this country and in this world,” Graham said. “So as we celebrate, let’s remember that our work still has to come. We still need to work to make sure that people don’t lose their jobs, their housing or be denied basic services because of who they are and who they love, but that also we must, if we are truly a movement of love, ensure that we work to eradicate the racism within our own community, within our own city, within our own region and within this society.”

In the same vein, Robin Shahar, Mayor Kasim Reed’s LGBT advisor, noted the location of the rally, saying, “This center right here reminds us of the horrors that can come about because of discrimination. And it also reminds us of the justice that we can achieve when we stand together with all of our differences and struggle together as one for human rights.”

Check out our jam-packed gallery from the big day below!