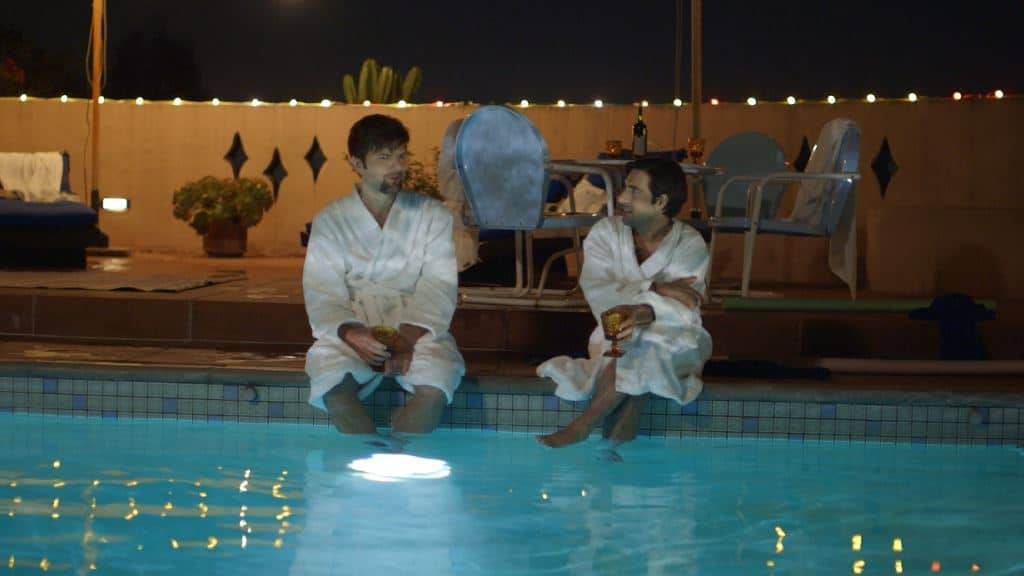 Review: “The Overnight” is a hit or miss sex comedy with homoerotic appeal

In the absence of much LGBT-themed product this summer (save for the upcoming documentaries “Do I Sound Gay?’ and “Best of Enemies,”) two new films at least have some major homoerotic appeal – and maybe more. “The Overnight” has just opened in theaters while “Magic Mike XXL” bows July 1. (Look for our review opening day.)

The least high-profile of the two, ‘The Overnight” is an old fashioned sex comedy that somewhat resembles 1969’s “Bob & Carol &Ted &Alice” – only with dangling penises. Emily and Alex (Taylor Schilling and Adam Scott) are a couple new to Los Angeles, having just moved from Seattle. He watches their kid during the day while she works – and laments the fact they haven’t made any new friends. At a playground one afternoon they meet Kurt (Jason Schwartzman) and Charlotte (Judith Godrèche). Their children bond and they do too. Before long, they all agree to hang out that evening.

Over the course of the night, after the children have gone to bed, the couples drink, talk and get to know each other. As the alcohol and marijuana come out, Kurt suggests they adjourn to the hot tub. From there, matters get a little out of control – and the transplants realize their new friends might be a little kinkier than they let on.

As a sex comedy, this is hit or miss. Some sequences are funny and other just strange, including a late night road trip Emily and Charlotte take.

“The Overnight” made headlines after its bow at Sundance earlier this year for its outrageousness, as well as its gratuitous male nudity. Writer-director Patrick Brice has not played it safe here. A lengthy sequence with Scott and Schwartzman sans trousers is funny and bold. Brice has made it clear in statements, however, that the actors are using prosthetic penises – of various sizes – which almost negates the point of the scene and the freedom the characters are supposed to have. Making matters worse is that actress Godrèche strips down too but Brice doesn’t feel the need to give her the same barrier.

What does drive the film, ultimately, are the performances. For a film with sex gags and body parts aplenty, the emotional connection is what most people will remember, especially the central couple’s vulnerable moments. Schilling, who plays Piper on Netflix’s “Orange is the New Black,” is the real standout, trying to make sense of an unscripted night. She and Scott have a terrific argument near the end that goes deeper than a film like this might.

In a summer of remakes and blockbusters, “The Overnight’ is on a smaller scale. It’s a short work, clocking in at only 80 minutes, and it could use more depth. Overall, though, it’s pretty agreeable and risky – and who’s seducing who might come as a surprise.