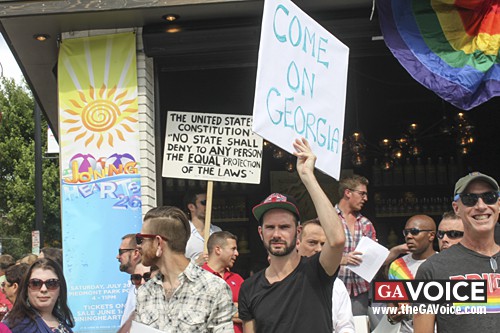 It was a cold, rainy Valentine’s Day just over a decade ago when some 1,000 people gathered on the steps of the Georgia Capitol. They were there to protest the General Assembly’s desire to enshrine discrimination into the state’s constitution with an amendment to prohibit same-sex marriage.

I remember that day pretty well. It was my first LGBT rally after moving to Atlanta just a few years prior so I could live my life as my true self. And I was enjoying this new sense of freedom I didn’t even know existed for so many years.

But then this happened―lawmakers were tripping over themselves in state after state after state to pass constitutional amendments to ban same-sex marriage, get them on the ballot, and feed their base the red meat it needed to ensure the anti-gay, anti-progressives showed up at the polls in November to vote. It worked. And it was a staggering loss for LGBT people in Georgia and many other states that year.

A clipping from the now defunct Southern Voice newspaper at the time described the scene like this:

Gays have turned out in record numbers to oppose the amendment, including an estimated 1,000 people who braved cold and damp weather to attend a Valentine’s Day rally hosted by Don’t Amend Atlanta, a grassroots group.

“It was amazing to see such a crowd, especially considering the weather,” said Bradley Smith, one of the rally’s organizers. “People were very passionate and I think if nothing else it motivated people to get involved, and realize this is a serious battle.

Atlanta City Council President Cathy Woolard encouraged attendees to take time to observe the day of love, and vowed to lead the public campaign against the amendment if it goes to voters.

Gays, lesbians and their allies need to “make so much noise that they will never try to do this again,” Woolard said.

“Love is the foundation of morality,” she told the crowd. “Love always triumphs over hatred―there is no power in hatred.”

Georgia Equality will continue hosting lobby days at the Capitol to try to woo House members, and Don’t Amend Atlanta is continuing to get the word out to gays to encourage their friends and family members to contact legislators.

I remember being impressed with the crowd, these people so dedicated they were willing to stand out in the rain to make their voices heard, to ensure they were seen as a group.

More than 10 years later, I’m the editor of the GA Voice. And a decade later we have seen significant strides toward equality with 17 states and the District of Columbia passing marriage equality bills. Dozens of states include protections for LGBT residents, the president publicly supports same-sex marriage. It’s almost like we live in a different world. But what happened 10 years ago is still taking place today.

Last month, a group of bipartisan lawmakers in Georgia jumped on the bandwagon to pass “religious freedom” bills that were also tagged as “turn the gays away” bills. Luckily, the bills didn’t pass this session thanks in larger part to the outpouring of LGBT people and allies who showed up at the Capitol and called and emailed their representatives at the urging, once again, of Georgia Equality.

It also didn’t hurt when major corporation such as Delta Air Lines and Coca-Cola said the bills were bad for business.

Again, we came together and this time we won. But must we only come together when there is something horrible about to happen? Can’t we also come together to support something positive for our community―a fair employment bill proposed by state Sen. Karla Drenner, an anti-bullying bill supported by state Rep. Keisha Waites. Georgia Equality Executive Director Jeff Graham posed that question after the successful defeat of the “religious freedom” bills, and he has a very good point.

At a recent press conference where Atlanta Mayor Kasim Reed kicked off the Southerners for the Freedom to Marry initiative (how’s that for progress, too?), a local TV reporter said he felt Atlanta’s LGBT community wasn’t very active―maybe we weren’t angry enough.

During my four years with the GA Voice, I’ve seen both sides of this. I’ve been to many rallies and events where I’ve been inspired by the numbers and the passion. I’ve also been to others and wondered why the room or the street or the block wasn’t packed with people to either celebrate or protest.

As a people who make up many LGBT communities, we have many different identities. My hope has always been that the role of a newspaper is to bring these identities together so we can all learn from each other.

GA Voice has been around for four years. Our identity is still young and maturing, but it has one main goal―to inform our readers and engage them in participating in our various communities. We do a good job of that already. We plan to do better in the next four years and beyond.