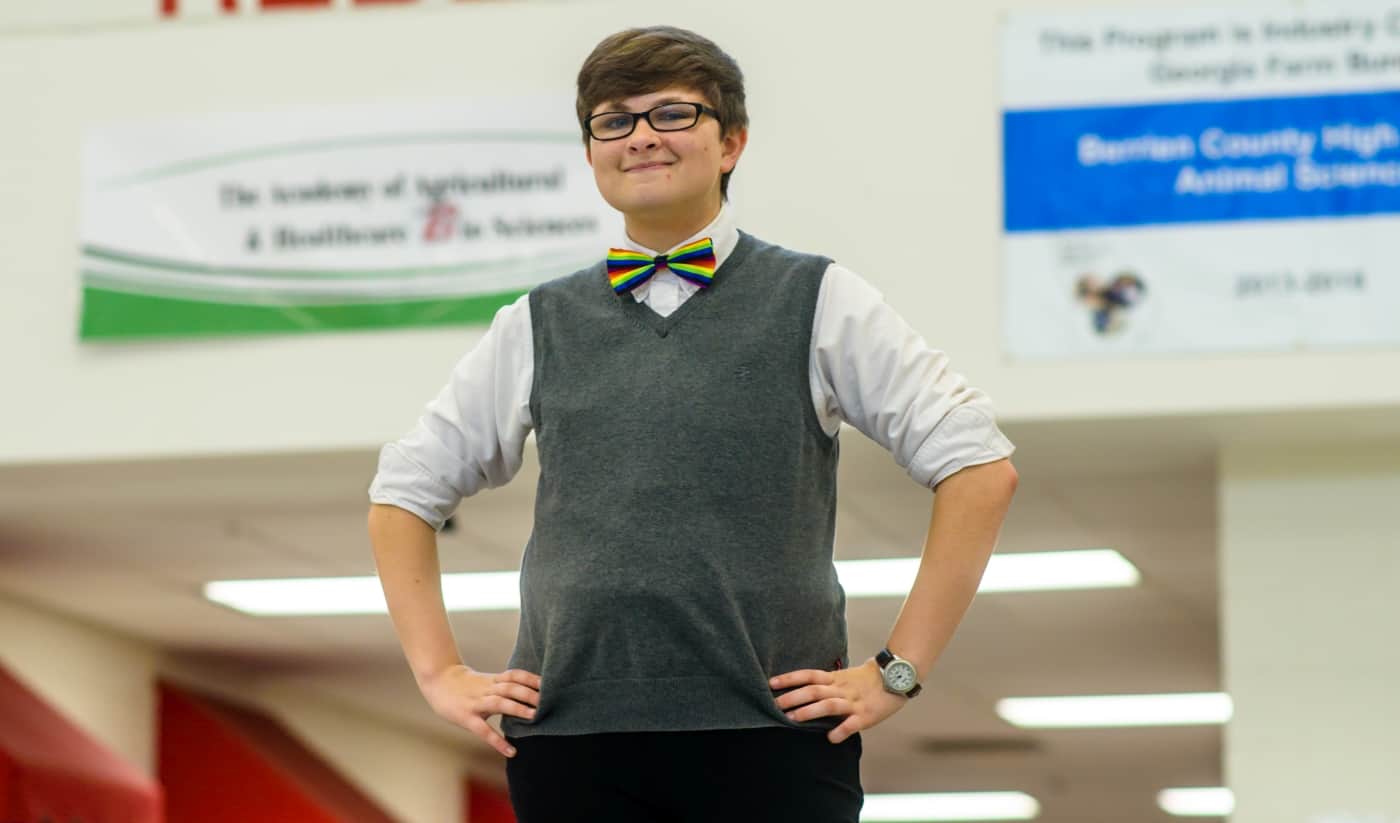 When Mars Hallman fought to get a Gay-Straight Alliance started at his high school in Nashville, Georgia (population: 5,000) last year, he hadn’t yet come out as transgender or gender nonconforming, fearing that it would hurt the chances of the club’s creation. Shortly after the club was approved, he came out as nonbinary. It made him realize that that was the last time he would compromise when it came to his sexual orientation and gender identity.

“I maintained the label of lesbian to try to make the transition of adding a GSA to my community easier for myself and for other people around me,” Hallman said in an interview with the Georgia Voice last winter, “and I realized that I don’t have to sacrifice myself to wait around for other people to catch up to me.”

He’s taken that lesson to the University of Georgia, where he’s now a 17-year-old freshman international affairs and Arabic studies major. And he’s made a quick jump into a leadership role by being elected director of education for Lambda Alliance, the school’s LGBT student organization.

Hallman’s transition from high school to college was an adjustment on multiple levels, namely moving to a school seven times the size, and a city over 20 times the size, of his small South Georgia town.

“Oh gosh, it feels like a huge city,” Hallman told the Georgia Voice by phone from Athens last week.

But there was also the transition on the LGBT front. Hallman lives in a coed dorm but on a female hall.

“So that’s not fun,” he says. “But the RAs (resident assistants) have done everything they can to make it more comfortable for everyone.”

He says he gets invited to go to events in the male halls, and his RA hosted a transgender and gender nonconforming 101 panel so that his hallmates can learn how to address people respectfully within a shared space.

“I think they’ve been adjusting very well,” Hallman says. “I’ve actually noticed them starting to change their language to be more inclusive. They don’t call us ‘the ladies of 5-North’ anymore. Sometimes they’ll just call us ‘the kids’ or they’ll call us ‘5-N’ but they’ve dropped the ‘ladies’ part.”

He doesn’t feel entirely safe living in an all-male dorm or hall at this point in his transition, and in the future plans to either live off campus or in a dorm that is separated by gender on a room-by-room basis instead of separated by hall.

Hallman adds that UGA faculty have been “very respectful” of his situation, including referring to him by his chosen name of Mars instead of by his legal name which he was assigned at birth along with his gender.

“I’m in a foreign language class where second person pronouns are genders, and my teacher will end conversation in oral exams and correct students who use the feminine for me and tell them, ‘No, Mars is the masculine you,’” he explains. “So far all of my teachers have been very proactive in making it a safe space for me.”

Hallman has been frequenting the school’s LGBT Resource Center and attending Lambda Alliance events since arriving on campus, and quickly turned that into being elected to the organization’s board last month. And he plans on continuing a history of making positive change for his fellow LGBT students by pushing to get more faculty safe space training-certified.

“Mars has a lot of good to offer,” says Rashad Small, senior coordinator at the LGBT Resource Center and faculty adviser for Lambda Alliance. “I think his experience coming from a smaller town in Georgia and facing adversity there when it comes to the Gay-Straight Alliance, he has a lot to offer to other student leaders who are older or younger. He’s lived it, he’s done it. He’s been able to provide a lot of good, real world experience to the students that are here with just the passion he has, the drive he has, and just the potential he has here.”

Beyond college, Hallman wants to pursue a career as a foreign service officer in the U.S. State Department, where he would continue to feed his passion for public service. But when we spoke last week, he was more focused on what was coming up the following day—his first performance in a drag show.

“Never in my life, living in Nashville, did I think I’d have an opportunity to perform gender. And now I’m in a safe enough space where I can say, ‘Oh bye Mom, I’ve gotta go to the drag show,’” he says laughing.