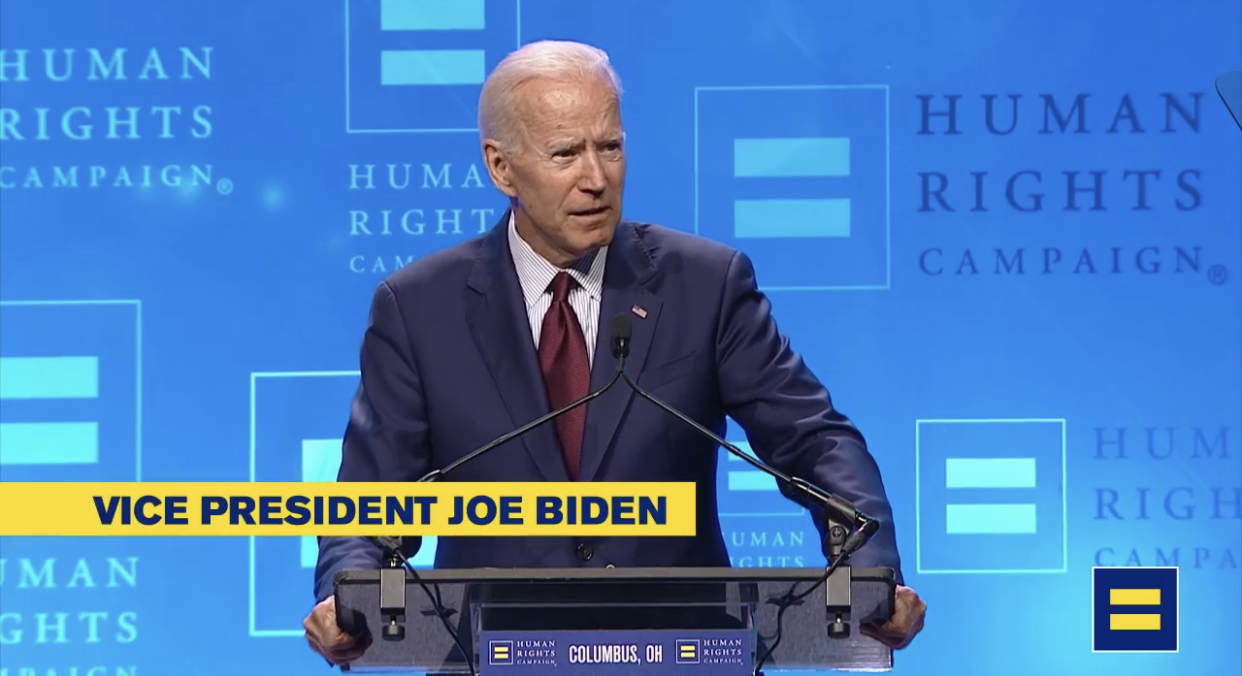 Democratic presidential candidate and former vice president Joe Biden said at an event for the Human Rights Campaign (HRC) that he would make protecting LGBTQ rights through the Equality Act his number one priority if elected president.

Biden attended HRC’s annual gala in Columbus, Ohio on Saturday (June 1), where he made his commitment to the LGBTQ community in a 30-minute speech for the audience of LGBTQ activists.

“There’s nothing that can change what you’ve started,” Biden addressed the audience. “Many of you paid a personal price for being who you are. You risked your jobs. You risked your livelihoods. Many risked their physical wellbeing.”

“Thanks to you, our children and grandchildren are growing up in a world which is far more just, far more open-minded, far more humane,” he continued. “But here’s the hard truth… this fight, as you know, is not nearly over.”

Biden went on to call LGBTQ rights “the civil rights issue of our time.”

“Just like with racial justice and women’s rights, we are seeing pushback against all the progress we’ve made toward equality,” he said, adding that the Trump administration was on “the wrong side of history” – “It’s wrong and it is immoral what they’re doing.”

He followed the condemnation of the Trump administration with an endorsement of the Equality Act.

“[W]e need the Equality Act… We need to elect a Democratic Senate that will pass it,” he said. “I promise you if I’m elected president, that’ll be the first thing I ask to be done.”

The former vice president also mentioned his “As You Are” campaign, which shares the stories of LGBTQ youth in the hopes of showing the importance of family acceptance.

Many other Democratic presidential candidates posted LGBTQ-supportive messages on social media in honor of Pride Month.

#PrideMonth is a celebration. And it’s a time to remember the trailblazers who fought for LGBTQ+ civil rights. Today—and every day—we renew our commitment to fight until everyone can live proudly, without fear. I’ll be right there alongside you. Happy #Pride! pic.twitter.com/uyHe6SQ8PY

Happy #Pride Month! This June I’m excited to celebrate our LGBTQ+ friends and community, and continue the work fighting for a future where everyone in this country can enjoy the same ideals of equality. pic.twitter.com/r3lfp94iPN

#PrideMonth is a time to proudly celebrate who you are. As we recognize the rich history and contributions of the LGBTQ+ community, let’s renew our commitment to dignity, acceptance, and equal rights for everyone.

Thanks to leaders like Marsha P. Johnson and Harvey Milk, I have faith in the possibility of change and growth in this country. There is still more work to do, but let us take a moment and celebrate the gains we've made this #PrideMonth.

As we celebrate #PrideMonth, let us also remember how far we have come because of the struggle led by the LGBT community and their allies. I will always stand in solidarity with our LGBT friends to ensure everyone in America is free to love and live as their true selves. pic.twitter.com/qW2UeswkND

President Trump also recognized Pride Month for the first time in his presidency, but was consequently criticized by LGBTQ groups because of his consistent attacks on the LGBTQ community.