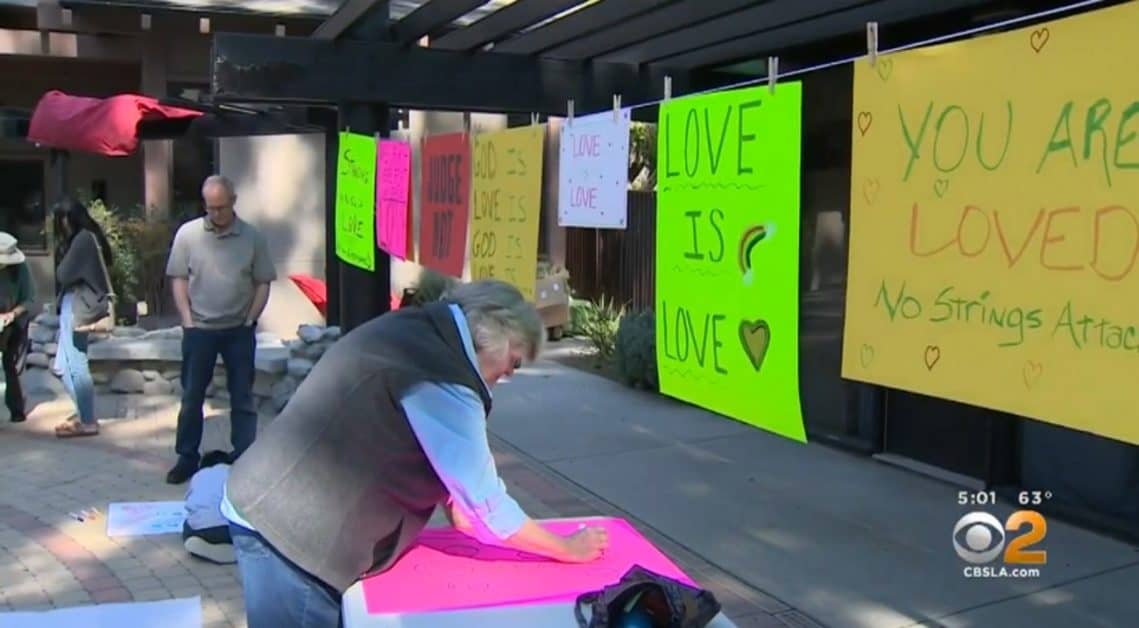 The WBC, which has been labeled as “arguably the most obnoxious and rabid hate group in America” by the Southern Poverty Law Center, wrote in a press release that the openly bisexual Jewish Rose Queen “has been so saturated in filthiness, that she bragged about being a pervert of the deepest waters (“the first LGBTQ queen”), honoring what God has called abominable.”

Siskel was crowned queen of the Rose Parade, an annual celebration held on New Year’s Day in Pasadena, California, in December. Not only was she the first LGBTQ queen ever crowned, she was also the first to be Jewish and the first to wear glasses.

The protest was scheduled for yesterday (February 25), but the community of Pasadena rallied together to organize a peaceful response to the WBC’s protest at Sequoyah High School, according to CBS Los Angeles.

The community created signs with positive messages of support of Siskel, as well as other LGBTQ students, reading, “God is love,” “Love is love,” “You are loved, no strings attached,” and “Judge not.” The message “love lives here” was also written on the ground outside of the school in chalk along with drawn rainbows.

Rather than taking on the WBC protestors with picketing of their own, the Neighborhood Unitarian Universalist Church’s Reverend Lissa Anne Gundlach advised her congregants to create an atmosphere of love around the LGBTQ students.

“We do not want to feed this group’s hunger for publicity or provide a megaphone for their words of hate,” she wrote in a statement posted to Facebook. “We want to support and surround the Sequoyah students and parents with messages of love. And so we are working with our members, Sequoyah, and the community at large to craft a peaceful response grounded in the Unitarian Universalist respect for the worth and dignity of all human beings.”

She went on to ask that her congregants refrain from demonstrating and instead join the church on Sunday (February 23) for a “training and poster-making workshop conducted by the Neighborhood Church Social Justice and Inclusion staff and LGBTQ+ Community Organizers.”

The WBC, whose slogan is “God Hates F**s,” has a long history of anti-LGBTQ demonstrations. Last year, the group targeted gay high school football player Jake Bain, who came out to his fellow students during an assembly at a Missouri high school.  Their protest was drowned out by a crowd of more than 100 pro-LGBTQ demonstrators.