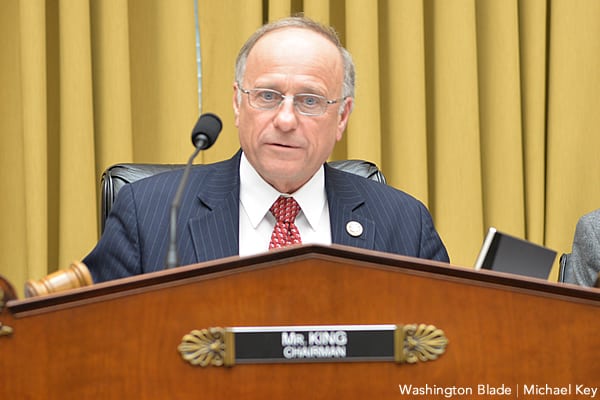 Could Anti-LGBT Rep. Steve King Go Down in Iowa?

Data from the organization published Tuesday found the Republican is in a dead heat with his Democratic challenger J.D. Scholten. Among the 631 likely voters polled in Iowa’s 4th congressional district, King has support from 45 percent of the district compared to the 44 percent who support Scholten.

That marks a significant change. According to Change Research, President Trump won the district by 27 points in 2016 and King won by 23 points. Just one month ago, another poll from Emerson College found King was ahead in Iowa’s 4th congressional district by 10 points.

What’s driving the current data? Change Research found opinion on Trump in Iowa’s 4th congressional district is divided. Fifty-one percent of voters there view him favorably compared to the 46 percent who view him unfavorably.

If Scholten is successful in defeating King, the Democrat would be taking down a member of Congress who not only has consistently voted against LGBT people over his eight terms in Congress, but has made anti-LGBT rhetoric and views — as well as his anti-immigrant and anti-Muslim views — an animating component of his political career.

In 2009, when the Iowa Supreme Court among the first to legalize same-sex marriage, King called for resignation of the justices and residency requirement for marriages so “Iowa does not become the gay marriage Mecca.” When three of those justices were up for retention at the ballot in 2010, King bought $80,000 of radio advertising to campaign against them. None of the three were retained.

Years later, when the U.S. Supreme Court ruled in favor of same-sex marriage nationwide, King said the decision “perverted” the word marriage and called for a resolution on the House floor that would encourage states to defy the decision.

“We’re in a place where the Supreme Court has put themselves above the law, above the Constitution and above the will of the people,” King said.

A frequent speaking at the annual anti-LGBT Values Voter Summit, King in 2012 railed at the conference against the Obama administration allowing same-sex weddings on military bases.

“They’re having them on bases throughout the world in places … same-sex marriage in direct offense to the Defense of Marriage Act,” King said. “This is an undermining of our Constitution, and the rule of law and the separation of powers.”

The lawmaker introduced a (likely unconstitutional) amendment in 2012 seeking to prohibit same-sex weddings on military bases, which was approved at the time by the Republican-controlled House.

More recently, King has also spearheaded initiatives in Congress seeking to bar transgender people from the U.S. armed forces. In a speech on the House floor, King compared service members to castrated slaves in the now defunct Ottoman Empire and said their service “isn’t a civilization killer, but it is an indication of a civilization killer.”