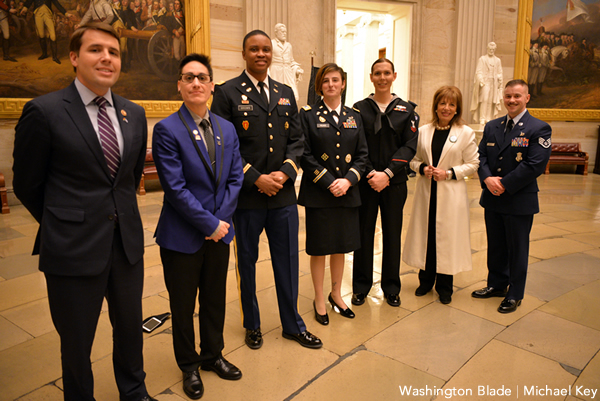 One amendment seeks to prohibit use of funds to implement a ban on military service of transgender Americans, the other prevents the Defense Department from spending funds to implement its ban on display of the LGBTQ Pride flags.

Speier proposes her amendment on nearly three-year anniversary of President Trump announcing on Twitter he’d ban transgender people from serving in the military in any capacity. White House Press Secretary Kayleigh McEnany dodged questions earlier this month on the policy, but insisted Trump has a pro-LGBTQ record.

The measure to undo the ban on LGBTQ Pride flags comes after Defense Secretary Mark Esper issued guidance last week indicated only designated flags, including U.S. flags and state flags, to be flown at military installations. The intent of the memo seemed aimed at banning Confederate flags, but the Pentagon confirmed to the Washington Blade it would also ban Pride flags.

Speier has sought before to undo the transgender military ban through an amendment to the fiscal year 2020 defense authorization bill, although the measure ended up being stripped from the final package in conference committee.