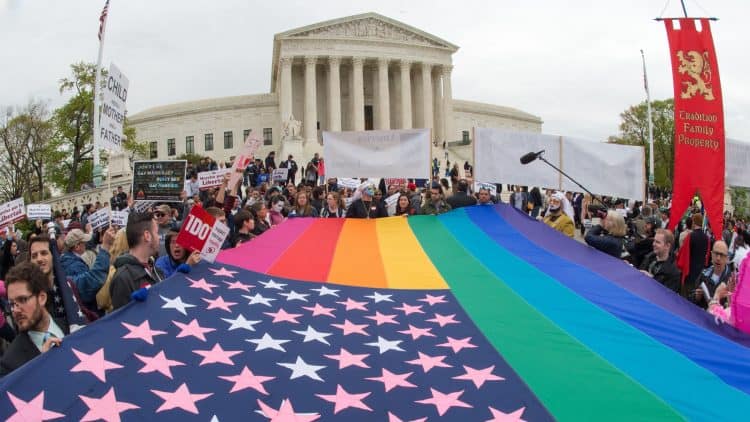 The 5 to 4 decision, authored by Justice Anthony Kennedy, strikes down bans that have been enforced in 13 states and is expected to secure the lower court decisions that struck down bans in nine other states.

Kennedy wrote that “the right to marry is a fundamental right inherent in the liberty of the person, and under the Due Process and Equal Protection Clauses of the Fourteenth Amendment couples of the same-sex may not be deprived of that right and that liberty.”

“The Court now holds that same-sex couples may exercise the fundamental right to marry. No longer may this liberty be denied to them.”

President Obama, at an impromptu press conference outside the oval office, said the decision was “justice that arrives like a thunderbolt.”

“Today, we can say in no uncertain terms that we’ve made our union a little more perfect,” said the president, in remarks that seemed unscripted. He said the decision “affirms what millions of Americans already believe in their hearts: that when all Americans are treated equal, we’re all more free.”

Chief Justice Roberts, who read from his dissent on the bench Friday morning, said “a State’s decision to maintain the meaning of marriage that has persisted in every culture throughout human history can hardly be called irrational.”

“In short, our Constitution does not enact any one theory of marriage,” wrote Roberts. “The people of a State are free to expand marriage to include same-sex couples, or to retain the historic definition.”

Justice Scalia, who is known for his harshly worded disagreements, derided Kennedy’s majority opinion, characterized it as “pretentious” and “egotistic” and said it “has to diminish this Court’s reputation for clear thinking and sober analysis” and caused him to want to “hide my head in a bag.”

Openly gay U.S. Senator Tammy Baldwin called the majority decision a “huge, huge milestone in our quest for freedom and human equality.” On MSNBC just minutes after the decision was released at 10 Friday morning, she called the decision “sweeping” and predicted it would help promote “full equality” for LGBT people in other arenas, including employment and public accommodations.

“We’ve always known that discrimination is wrong,” said Baldwin, “but to have the Supreme Court in such a bold fashion say that it is now unconstitutional is just remarkable progress.”

A large crowd of LGBT people and supporters and media crowded the steps before the Supreme Court building plaza Friday morning. A male chorus could be heard singing the national anthem at 10:35, with onlookers waving rainbow and Human Rights Campaign equal-sign flags.

Mary Bonauto, the openly gay attorney who argued against the state bans on marriage for same-sex couples, told the Supreme Court gathering that the decision is “momentous” and “a landmark ruling for love and for justice.”

In her remarks to the crowd, and then later to a reporter, Bonauto noted the decision was released on a day when the country is in deep mourning over the racially motivated killings of nine African Americans at a Bible study inside Charleston, South Carolina’s historic Emanuel African Methodist Episcopal Church.

Bonauto said it was important that all people be treated equally and protected from violent acts of discrimination. She told MSNBC that the court’s decision shows “we do have a fundamental right to marriage” but that the “nation remains divided about this even as a majority of people support loving and committed couples taking this step to marry.”

“Today is a monumental victory and a giant leap towards full equality,” said Human Rights Campaign Executive Director Chad Griffin, to an MSNBC reporter on the steps of the Supreme Court. But he, too, added that there is much more to do.

“While we’re all out here celebrating today because marriage equality has come to every state in the country,” said Griffin, “we also have to remember that still today in America, in this country, in a majority of states, the moment this decision is realized and couples get married, in a majority of states, they can be married at 10 a.m., fired from their jobs by noon, and evicted from their homes by 2 simply because there are no explicit federal protections as it relates to non-discrimination in this country.”

The Human Rights Campaign announced it was sending letters to each governor of the 13 states plus Missouri (which allows marriage but only in certain jurisdictions) to urge “immediate” and “full compliance with the law.”

In some of those states, efforts have been underway for some time to find a way to defy the widely anticipated Supreme Court decision. The North Carolina legislature passed a bill to let public officials who issue marriage licenses and can conduct ceremonies to refuse to administer the paperwork or perform the ceremony by claiming “sincerely held religious objections.” The governor vetoed the measure but on June 11, the legislature overrode the veto.

But Shannon Minter, legal director for the National Center for Lesbian Rights who was involved in one of the four cases under appeal, said the majority opinion includes discussions that are likely to help equality for LGBT people in many other arenas.

“The court’s ruling that fundamental rights cannot be limited based on historical patterns of discrimination will be helpful to LGBT people in other fundamental rights cases, such as those involving the fundamental right to procreative freedom, to vote, to create a family, and to travel,” said Minter. “The court’s emphasis that the constitution protects a broad liberty to self- determination and expression will be helpful to transgender litigants in many contexts.” And Minter said the majority’s discussion of parenting will be “enormously helpful in other parenting cases.”