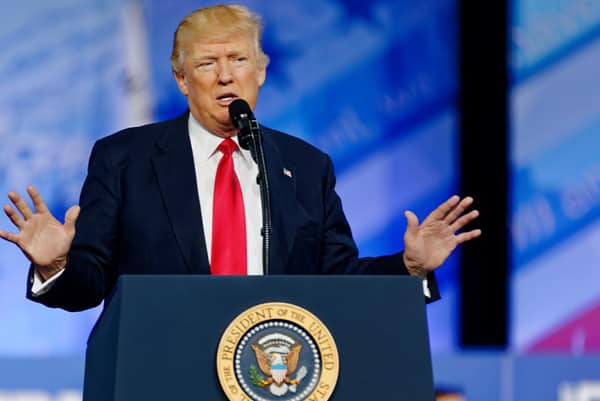 Trump Comes Out Against Equality Act

With a vote on the Equality Act in the U.S. House expected on Friday, a senior administration official indicated exclusively to the Washington Blade that President Trump opposes the bill.

“The Trump administration absolutely opposes discrimination of any kind and supports the equal treatment of all; however, this bill in its current form is filled with poison pills that threaten to undermine parental and conscience rights,” the senior administration official said via email.

More details about Trump’s position on the Equality Act may come soon from the White House, which traditionally issues a Statement of Administration Policy when legislation comes to the floor of either chamber of Congress.

The statement is arguably a change in position for Trump. In 2000, when Trump was exploring a presidential run as a Reform Party candidate, he said in an interview with The Advocate he likes the idea of amending the Civil Rights Act to include sexual orientation — a key component of the Equality Act.

“I like the idea of amending the 1964 Civil Rights Act to include a ban of discrimination based on sexual orientation,” Trump said. “It would be simple. It would be straightforward. We don’t need to rewrite the laws currently on the books, although I do think we need to address hate-crimes legislation. But amending the Civil Rights Act would grant the same protection to gay people that we give to other Americans — it’s only fair.”

The Equality Act, as it will come up in the House, would amend the Civil Rights Act of 1964 and the Fair Housing Act to ban anti-LGBT discrimination in employment, housing, public accommodations, jury service, education, federal programs and credit.

But the Equality Act goes further than what Trump said he supported in 2000. In addition to transgender inclusion, the bill seeks to update federal law to include sex in the list of protected classes in public accommodation and expands the definition of public accommodations to include retail stores, banks, transportation services and health care services. Further, the Equality Act would establish that the Religious Freedom Restoration Act — a 1994 law aimed at protecting religious liberty — can’t be used to enable anti-LGBT discrimination.

The White House statement is consistent with the Trump administration’s anti-LGBT actions, such as the transgender military ban, withdrawal of guidance to schools assuring transgender kids have access to the restroom consistent with their gender identity and actions taken in the name of “religious freedom” seen to undermine LGBT rights.

UPDATE: A House senior Democratic leadership aide told the Blade after publication of this article Trump’s opposition to the Equality Act doesn’t change anything in terms of plans for a floor vote on Friday.