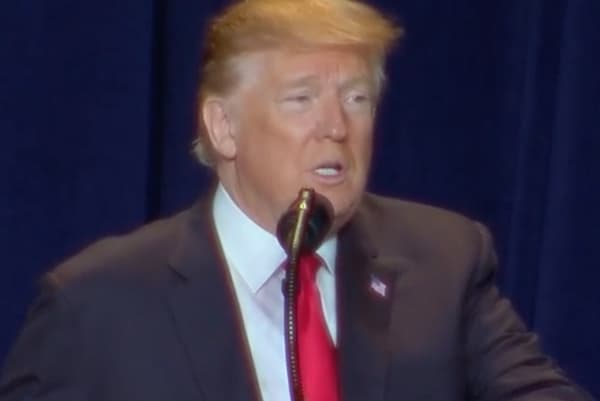 President Trump made a series of veiled anti-LGBT statements under the guise of “religious freedom” Thursday at the National Prayer Breakfast, including praise for Karen Pence for teaching at a Christian school that bars LGBT students and teachers.

In his introductory remarks at the annual event, Trump pointed out the second lady and said, “She just went back to teaching art classes at a Christian school. Terrific woman.”

The Christian school where Karen Pence has returned to teach, Immanuel Christian School in Springfield, Va., was found to have anti-LGBT policies, generating controversy and anger in the LGBT community over the second lady’s decision to return there after 12 years.

The school — which declares in employment application “homosexual acts and lifestyles are clearly perversion and reprehensible in the sight of God”— bars admissions of students if their home condones being LGBT and refuses to employ LGBT teachers. (Vice President Mike Pence has called criticism of the school “deeply offensive.”)

The National Prayer Breakfast, hosted by the Christian organization called The Fellowship Foundation, has been controversial because of ties to anti-LGBT advocates, but has traditionally enjoyed bipartisan support.

But Trump’s veiled anti-LGBT comments at the National Prayer Breakfast — where in an ironic misspeak he credited people of faith for achievements including “the abolition of civil rights” — weren’t limited to a reference to Karen Pence’s school.

The administration’s actions on “religious freedom” include guidance from the Justice Department widely seen as a green light from the U.S. government for businesses and individuals to refuse to services to LGBT people. Also, critics say the Conscience & Religious Freedom Division within the Department of Health & Human Services enables medical practitioners to decline to perform gender reassignment surgery or treat people with HIV.

Trump made a reference to one “religious freedom” action from his administration in particular, the decision of the Department of Health & Human Services to grant a waiver to taxpayer-funded South Carolina adoption agencies exempting them from regulations barring discrimination.

“My administration is working to ensure that faith-based adoption agencies are able to help vulnerable children find their forever families while following their deeply held beliefs,” Trump said.

As a result of the waiver Trump referenced, faith-based adoption agencies in South Carolina are now able to refuse child placements in families that conflict with their religious beliefs, including LGBT homes. Among them is Miracle Hill Ministries, which sought the waiver.

“President Trump has yet again attacked LGBTQ people, this time at the expense of children in need of a home,” Acosta said. “With more than 400,000 children in foster care nationwide, Trump should focus on increasing the placement of children with qualified potential parents, not supporting state-funded discrimination against LGBTQ families. Every child deserves a home, and every qualified person seeking to adopt deserves to be considered.”