“Coming from him, he told me, if you ever doubt how I feel about you, you need to remember this moment,” Douglass added. “You never really know with men. Men aren’t prone to expressing their feelings for you. It floored me.”

Lanoue and Douglass have been together for six years. Douglass said that after the first year together, he’s thought of Lanoue as his husband. 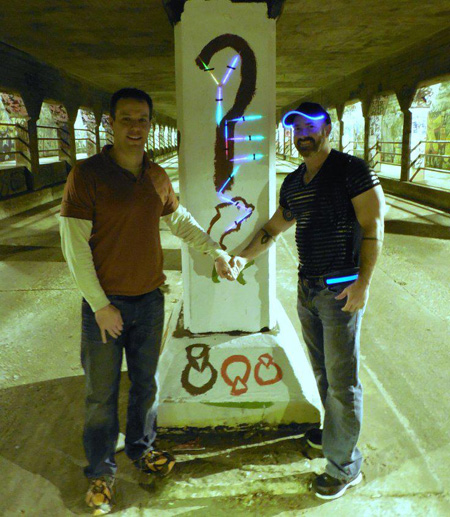 “I don’t think it will change our relationship but it will solidify it,” Douglass said of the proposal.

Lanoue bought the engagement ring this past December and decided to pop the question at an intimate dinner with friends.

“Up to this point, I had always said we don’t need to get married. We don’t need that label. But over the last couple of months I changed my mind on the subject. No one’s ever proposed in the tunnel,” Lanoue said.

It took several nights and was “probably a little more work” than he initially thought, but Lanoue said it was the perfect way to say “I love you.”

The couple will officially tie the knot sometime in the next year, but no plans have been set in stone. Right now, they’re enjoying the engagement.

“I just finished the engagement,” Lanoue said. “Weddings are a lot work!”