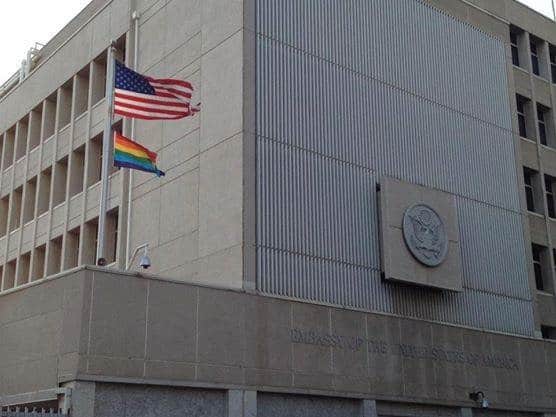 “We fly the rainbow flag in solidarity,” the U.S Embassy in Jamaica tweeted after the Pulse nightclub shooting that killed 49 people in 2016.

In 2014, the Israeli U.S. Embassy flew the rainbow flag in observance in Pride Week, and the U.S Embassy in Belize did the same this June.

However, these displays of solidarity may soon be no more, if Representative Jeff Duncan’s (R-SC) “Old Glory Only Act” passes.

The act, introduced on July 19th, would ban all flags other than American from being flown by U.S. embassies.

Duncan defended his act to the Washington Examiner, saying that “the United States flag in the single greatest symbol of freedom the world has ever known, and there’s no reason for anything but Old Glory to be flying over our embassies and posts around the globe.”

Opponents argue that the bill, while thinly veiled as patriotism, would be a disservice to the LGBT community.

They say flying the pride flag at the embassies has been a symbol of solidarity with LGBTQ populations living in other countries–as well as with the American LGBT community.

The bill has 34 cosponsors, all Republican, and is currently with the House Foreign Affairs committee, who will determine whether the bill will move past the committee stage.

GovTrack doubts the bill will be of high enough priority for congressional passage, with less than four months until midterms, and is uncertain it will garner enough Republican support.