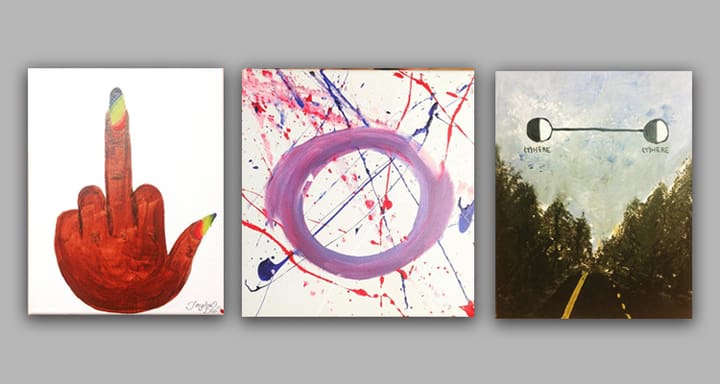 The participant-driven art project is the brainchild of Jim Peera, manager at Healium Arts Center in Atlanta, and aims to bring 100,000 pieces of art expressing America’s sentiments to the White House this summer.

“Since the election, people have been sliding even more into the abyss and putting their heads in the sand, and very scared,” Peera said. “Now there’s a calling for Healium to really expand nationwide or maybe worldwide and maybe, at some point, we’ll have one in the White House and whoever’s at the helm will say, instead of making war, let me make art first.”

The project was inspired in part by the self-care mission of the art space, which Peera started three years ago. He knew school-age children and young adults had creative outlets, but not so much for adults.

“They were going to maybe ball games or movies or hibernating in their homes … but there was not an interactive environment that I could see that people were going out and expressing themselves and releasing their stress and unleashing in a very holistic way,” Peera said. “The same way that we have seen people connect with art in our center for the last three years, we feel that this project can really change the landscape of people where people can start seeing where their more common ground exists.”

Participating in the project is quite organic. There aren’t classes or guided wine-and-draw nights, just open times for people to come paint their hearts out on eight-by-10 canvases.

“I didn’t want to make it something that was structured where people had a teacher, or they had to conform to a certain institutional kind of learning. The idea was to actually be opposite of that, to have just ordinary people from all walks of life and just open up without judgment, without pretense, without having any kind of fear or any recourse,” Peera said. “You will actually melt into a zone that is unlike any other.”

There aren’t any specific guidelines as far as what to paint, but Peera encourages participants to express how they feel and their state of mind as to where the country and world are today. Some of the pieces are direct references to the president and his policies, or remarks made on the campaign trail. Others have a feminist or LGBT-related message.

For those who may not be able to paint in-person at Healium, Peera said they are welcome to paint at home and send their art to the center for inclusion in the project.

“This is non-partisan. Whether you like Trump or you hate Trump or whether you’re in-between, everybody has a heart that has some sort of a concern right now,” Peera said. “Words can be misconstrued or words can be taken out of context. [With this project] they’re spending half an hour, an hour or whatever getting inside all of their heart and soul and articulating something that they’re feeling in a painting. By doing that, that’s healing.”

He believes having an open time for people from all walks of life to be part of such a project allows them to find common ground.

“After you guys have done your painting, you start realizing you’ve got a lot more in common as human beings, as Americans, and you want the same thing. You’re more unified than the leader of this country is making you feel like,” Peera said.

“The Art of the Heal” project

Art must be submitted by June 19