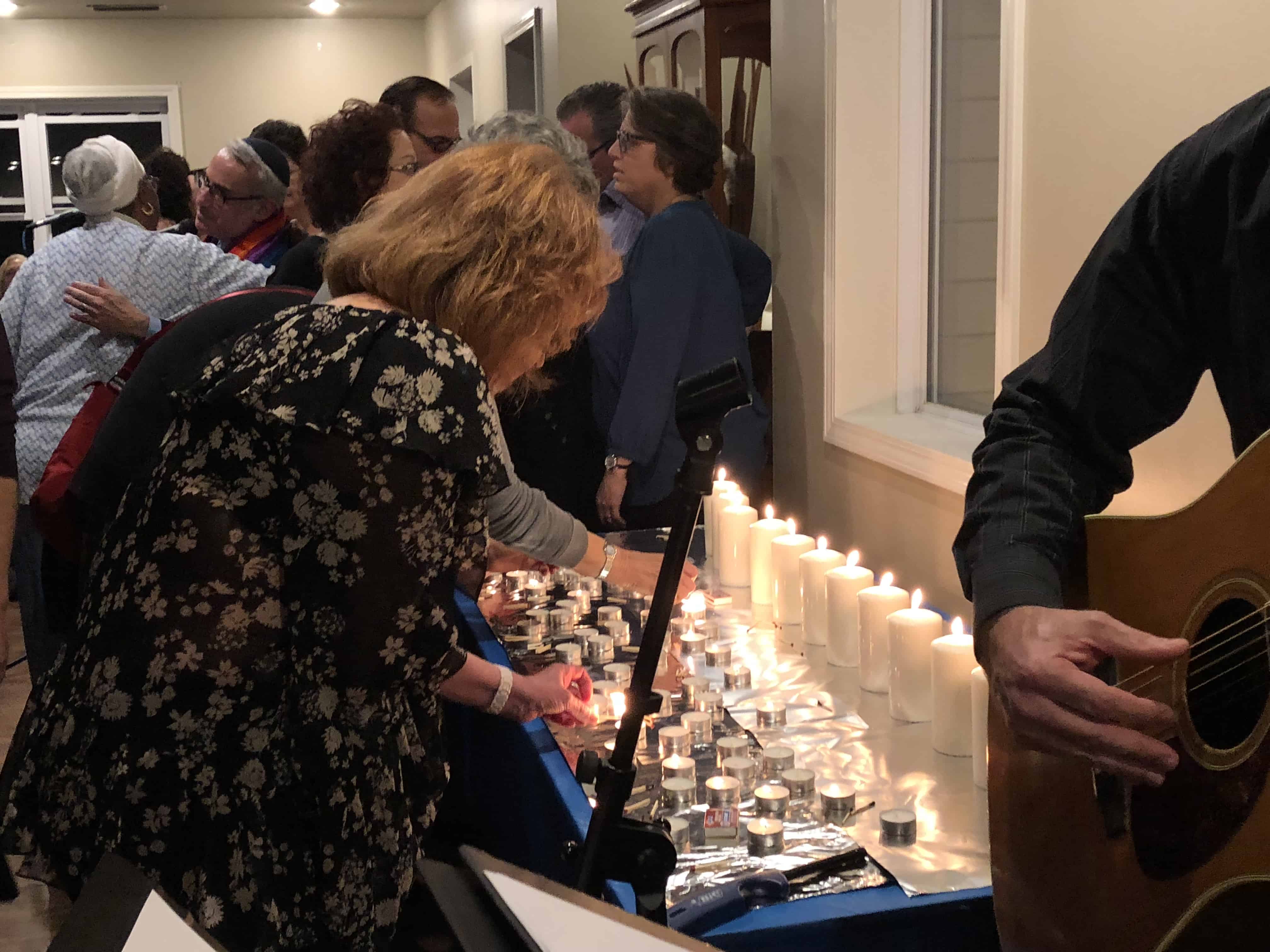 The small, house-like building of Congregation Bet Haverim was filled to overflowing with people – nearly at fire-hazard capacity, the ushers said. Congregants stood in rows in the back of the room, and some sat in the aisles.

On Tuesday night, Atlanta’s LGBTQ+ Reconstructionist synagogue held a vigil for the eleven people killed in a shooting at the Tree of Life Synagogue in Pittsburgh last Saturday. The attack has been declared an antisemitic hate crime. The shooting reportedly occurred during a brit milah, or baby naming, for the adopted twins of a gay couple.

Gayanne Geurin, the Congregation Bet Haverim’s musical director, led and united the crowd in a solemn chant. Kol ha’olam kulo gesher tzad me’od, veha’ikar lo li’fached klal, which translates to “All the world is a very narrow bridge, and the most important thing is not to be overwhelmed by fear.”

Rabbi Joshua Lesser, known as Rabbi Josh, began by acknowledging the pain and grief in the wake of the shooting. “My heart breaks for the loss of these elders,” he said, becoming tearful. “May we feel [God’s] presence in the brokenness of our hearts and the brokenness of our world.” Rabbi Josh also acknowledged the people of other clergies and religions in the crowd who were attending to support the Jewish community.

“Anyone who knows me knows I love all things Pittsburgh,” said Susan Levy, an Atlanta attorney who grew up in the Squirrel Hill neighborhood, where the Tree of Life Synagogue is located. She reflected on the pain of seeing such dark footage of her childhood neighborhood on TV. She expressed how much she initially loved the image of the Pittsburgh Steelers logo that had been altered to include a Star of David in one of its three diamonds and the message “Stronger than Hate.”

However, as she contemplated the message, it began to feel empty. “What’s going to change besides more names on a list?” Levy asked. “I didn’t believe love was stronger than hate … those who were attacked were elderly people davening in shul. What can love do to that kind of hate?”

In her pain, Levy felt the love and support of the Congregation, and love from her friends and family who had reached out to see if she was okay. “I have felt known and I have felt loved. That love is magnified by everyone gathered here tonight.”

Congregants read each of the names and ages of the eleven people who were killed at the Tree of Life, each followed by a brief message about their lives and how they were remembered. Each memorial was punctuated by the lighting of a candle and Geurin leading the crowd in a chant of shalom — peace.

Cecil Rosenthal and David Rosenthal, 59 and 54.

When remembering Jerry Rabinowitz, the members of this LGBTQ+ congregation made a point to mention how compassionately he had cared for HIV/AIDS patients during the 1980s.

Rabbi Josh noted that one of the three congregations that held services in the Tree of Life synagogue was a sister Reconstructionist congregation, Congregation Dor Hadash. Rabbi Josh described HIAS, the refugee aid organization that the shooting suspect condemned on social media, as a “Jewish North star” in its commitment to refugees.

Congregation Bet Haverim’s choir supported the vigil with songs such as Bobby McFerin’s version of Psalm 23 and “Even When He is Silent,” a song adaption of a poem of hope that was penned anonymously on a wall during World War II.

The congregation joined in a chant calling for love and compassion, kindness and peace: Ahava v’rachamim, chesed v’shalom.

Another congregant led a prayer for the United States written by Rabbi Ayelet Cohen. The prayer called for people “to uproot bigotry, intolerance, misogyny, racism, discrimination and violence in all its forms, to celebrate the many faces of God reflected in the wondrous diversity of humanity,” and “to welcome the stranger and the immigrant and to honor the gifts of those who seek refuge and possibility here.”

The prayer was especially poignant in light of anti-immigrant sentiments that had been expressed by the shooter, as well as by President Trump and his supporters against the “caravan” of migrants that is currently making its way towards the U.S. border. Gayanne Geurin said that Congregation Bet Haverim was one of about 300 synagogues across the country that participated in a “HIAS refugee Shabbat” last weekend, Tree of Life included.

Dr. Heval Kelli, a Syrian refugee and cardiologist at Emory, remembered the ways the Jewish community had uplifted him in his own life. “I learned English by reading Anne Frank,” he said. “Today while performing echoes and EKGs, I can’t try to see if the heart is Jewish or Muslim, Black or white… the heart does not discriminate… hate does not discriminate.”

“We must stop meeting like this,” said Rabbi Josh, referring to the vigils that follow seemingly endless spates of gun violence in America. “I mean it. This can’t keep happening.”

The CBH choir performed an arrangement of Melissa Etheridge’s song “Pulse,” a tribute to the victims of the 2016 shooting at Pulse Nightclub in Orlando, Florida. “I am human, I am love, and my heart beats with my blood … Love will always win, ‘cause underneath the skin, everybody’s got a pulse,” they sang.

Rabbi Josh emphasized the importance of finding comfort in the resilience of other oppressed groups in the United States and the resilience of Jewish ancestors. “When we’re not sure how to make it through, [know] that there are others who have walked this path.”

Draped in his rainbow prayer shawl, Rabbi Josh addressed congregants’ concerns about the uncertainty of the future and the safety of the Jewish community. “I want to say that I’ve thought about safety almost my entire life,” he said, speaking about the persecution his grandparents had faced during the Holocaust, the antisemitism he witnessed growing up as a Jew in the South, and the concerns his family members had for him as an openly gay rabbi. “One of the things that I’ve always said is, God forbid if something like that were to happen to me, please know that I do work in this world that I’m proud of. And so when I think about the people who died, and we heard just two or three sentences of their stories, if we dig in a little bit deeper, as is being shown in this moment, they were not safe in that community.”

People in the crowd cried and held each other.

“But what they were safe in is how they lived their lives. And every single one of those people, in one way or another, were dedicated to living lives of generosity and kindness,” he continued. “They were living lives that, God forbid, if something happened to them, they left behind a legacy to inspire us.”

“And so this idea that love will win, or that love is stronger than hate, doesn’t mean that we somehow will be magically protected in a bubble. What it means is that the way we commit to live our lives is the way that love wins. It is the way that we walk through this world whether we are scared or whether we are fearless. And trust me, we are often both of those things. … I think we have to figure out how we can recognize that the world is a fraught place. It is complicated, and it is scary, and it is dangerous. But there has to be a commitment to our own sense of resilience and commitment to move further.”

As congregants chanted “I am light,” those who wished to moved forward to light tea candles to accompany the eleven candles that were already lit for the massacre victims.

On the patio, people held up their phone flashlights in solidarity. The Mourner’s Kaddish, the prayer for the dead, was recited while people wept. As attendees shuffled out of the synagogue, one congregant expressed that the unexpectedly large amount of people who had gathered at CBH was astounding and meaningful.

“Even if no one had said a word after that,” she said, “the love would have still been felt.”