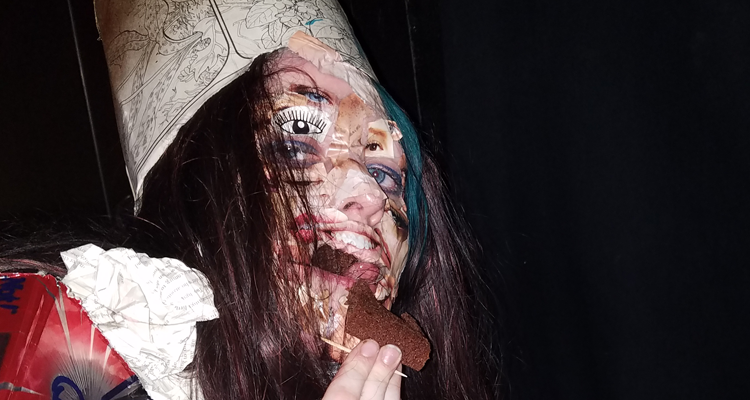 A Different Kind of Pride

When I first met Paege Turner, one of Atlanta’s most ingenious drag performers, the artist was engaged in a very different type of performance. Actually, the two of us looked quite similar, both sporting greasy hair and the dishevelment of those who have slept in their clothes. We joined a few dozen women in a room with concrete walls and scuffed tile and buzzing fluorescent lights. One by one, we stepped forward as a judge announced our bail. It was 10am on a Sunday in June, but instead of celebrating Pride and pouring mimosas, we were in jail after linking arms and blocking the interstate the night prior.

A few months later, Paege and I sat down to reflect on that particular moment. “Rayshard Brooks was a member of my neighborhood,” Paege told me. “When I heard about what happened, I knew I had to be out there. In the heat of it all, when organizers were telling white protestors to hold the line, I knew I needed to stay.”

But the arrest experience was especially complicated for Paege, who’s nonbinary. Thanks to our transphobic justice system, Paege got lumped in with a bunch of women, and getting through the jail stint meant that Paege had to play along.

Not that gender performance is necessarily new for Paege, who’s been startling and delighting Atlanta’s audiences since 2016.

“When I used to go out to see drag shows, I never saw the performances that I wanted to see,” Paege explained. “I could tell that I wanted something else. Something a little weirder, something more expressive.”

That longing inspired Paege’s approach to drag, which ranges from creepy to clownish. If you’ve ever wanted to watch a queen grind on stage in a negligee as they claw off pieces of their face, then Paege Turner is definitely for you. Sensuality is matched only by the macabre, perhaps because Paege’s performances are so keenly attuned to the eeriest elements of our society’s feminine expectations.

When designing a new look, Paege gravitates toward found materials and repurposed trash, which is why they might appear on stage with a mask made of cigarette butts or sport a look that’s part-femme, part-mutant teddy bear. But no matter how Paege chooses to show up, their style defies any and all assumptions of drag.

But donning a green wig or creating a geode-inspired makeup scheme isn’t the same as playing the part of a woman within the criminal justice system. Gender code-switching isn’t the type of performance that anyone wants to put on, but unfortunately for those within the nonbinary community, it’s an all too common experience.

That’s why Paege uses drag as a way to include excluded folx. “I just threw myself into it,” Paege said. “I started creating spaces for people who are nonbinary and for people who are usually underrepresented, even in gay spaces. When I started organizing my own productions, I wanted to include performers who weren’t getting cast in other shows.”

That urge to establish a more inclusive drag experience led Paege to create Hussy, a show hosted at the Bakery, and No Boys Allowed, a regular event with Southern Fried Queer Pride for non-men. Along with King Perk and Aries Alxndr, Paege has also been a co-host of Cabbage Patch, an all-ages drag brunch geared toward kids and families.

If Paege promotes an approach to drag that pushes boundaries and invites exploration, perhaps it’s because drag was a critical part of their own personal growth. Paege grew up in Griffin, Georgia, only an hour outside of Atlanta but worlds away from the city’s more inclusive culture. Their family was, as Paege puts it, old-school Baptist, and it wasn’t exactly a safe space for a kid to explore gender and sexuality. “Everything with my sexuality was pretty repressed,” Paege recalled.

“I eventually came out as bisexual.”

It wasn’t until Paege moved to Atlanta for college, and then subsequently dropped out, that drag began to feel like a possible outlet.  “I didn’t know what I was doing with my life,” they said. “And I was feeling so disconnected from myself.”

Paege’s initial drag forays inspired them to start asking questions about their own gender and eventually come out as nonbinary. The playfulness and experimentation of drag became revelatory for them, and it offered that sense of self-connection that was missing for so long. “And it’s not just me,” Paege says. “All of the people I started performing with who identified as cis-gender, none of them do now.” For Paege, the art of drag is a means of personal understanding, a space of self-acceptance and a strategy for creating a more inclusive world.

Embracing drag’s inherently activist nature means embracing activism’s many forms, a truth that has become especially clear in 2020. At the heart of it all is a conviction that Black liberation and queer liberation inevitably go hand in hand. “When I was in school, I learned about queer as a political identity,” Paege explains. “Anything that makes you different makes you queer in some way, whether that means being Black or undocumented or whatever. Queer activism is about doing whatever you can to protect all queer bodies. Intersectionality plays a big part in that.”

Since October is Atlanta’s official Pride month, the LGBTQ+ community has another chance to recognize that Pride will be different this year, both because of the pandemic and the ongoing protests against police brutality. Indeed, perhaps Pride must be different for every year to come if we are to be a true force for racial justice. For Paege, Pride is an opportunity to draw the circle of community even wider, a chance to reexamine the boundaries within ourselves and our world.

“I think I see this as a season for reflection,” Paege said. “Pride is all about community. We have to support each other because we’re all that we’ve got.”