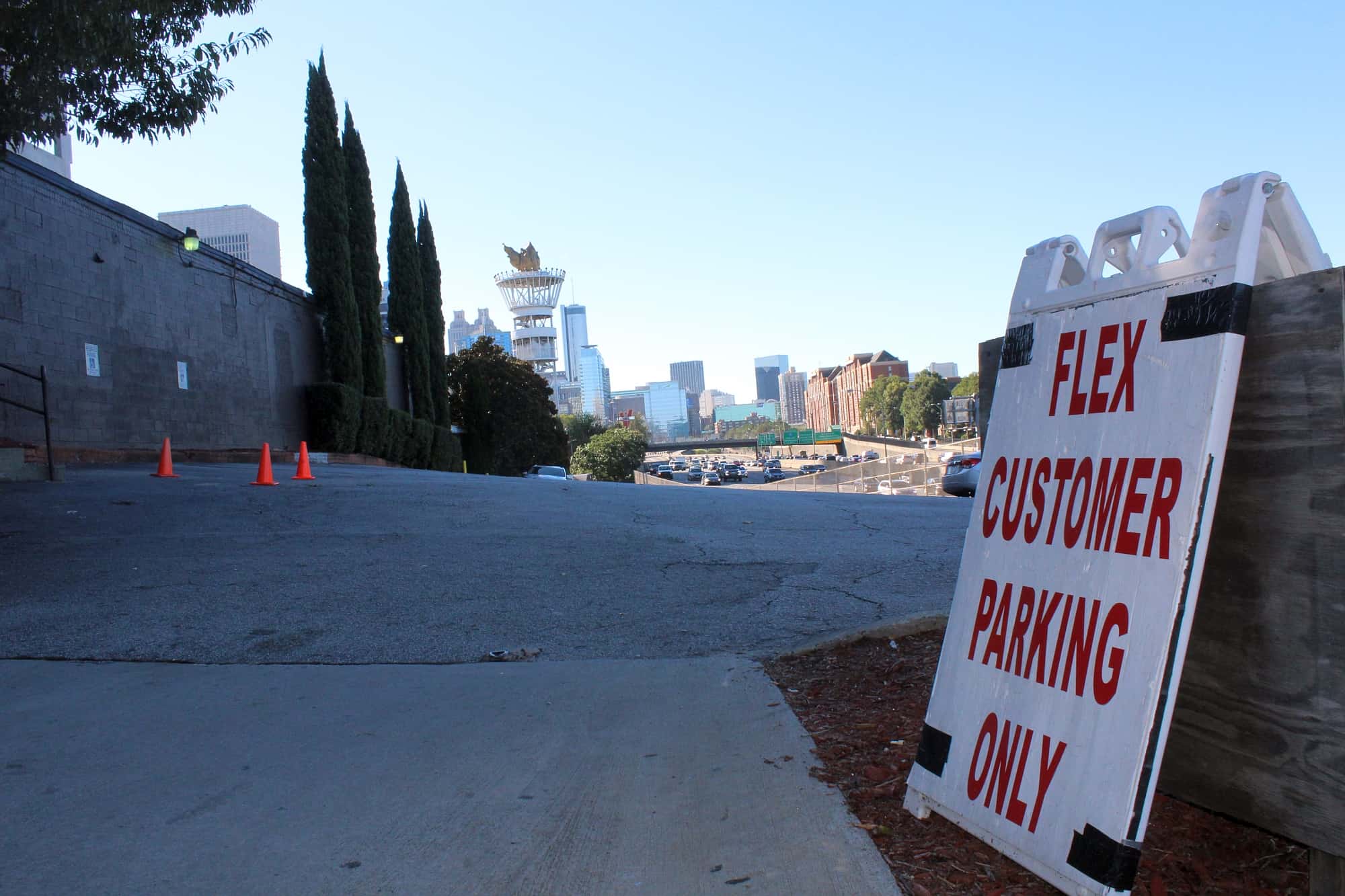 The most notable symbol of progress that LGBT Atlanta has made over the past half-decade may not be the vibrant rainbow crosswalks that encircle the intersection of 10th Street and Piedmont Avenue, but rather a black-and-white banner tied to a construction site fence on the corner of 4th and Spring streets.

It’s a sign that is seen every day by nearby Georgia Tech students and Midtown professionals, yet it is an announcement aimed at, and understood by, a select few. Beside a westward-pointing arrow, the banner reads, “FLEX, 76 4th Street NW, WE ARE OPEN FOR BUSINESS.”

Though modest in appearance, the sign is bold visibility for a location that has preferred to operate incognito for most of its lengthy history, a discretion that helped it survive a puritanical purge in the 1970s, plague in the 1980s and gentrification in the 1990s and 2000s. But in 2017, the operators of Flex feel comfortable enough to remind all passers-by that, amid the construction that continues to re-make Midtown, there remains a bathhouse open and operating on 4th Street, where gay men meet to have easy, anonymous sex.

“It was kind of like a speakeasy,” recalled longtime Atlanta resident Dave Hayward, who began visiting the bathhouse, then known as Club Atlanta Baths, in the 1970s. “You wouldn’t know it was there unless you knew it was there – it’s kind of off the beaten path, at the end of a sort of dead-end street.”

Bathhouses have long been an open, dirty little secret for gay men, rarely talked about outside of close circles of friends, and the bane of those who yearn for a more respectable, less promiscuous, public image of homosexuality.

“It was always considered to be something that was on the down low,” Hayward says. “You would do it, but you’re not going to say, ‘I had a great time at the baths last night,’ unless you were talking to close friends.”

Public bathhouses originally operated in major cities to promote hygiene among poorer populations, but as indoor plumbing became universal, the venues transitioned into cruising houses for gay men. Atlanta’s bathhouse – first known as Club South Bath, Club Atlanta Baths, Flex Baths and now Flex Spas – has always been a sexual establishment, and like other such businesses, experienced a boon in the post-Stonewall ’70s.

“That was a time when everything was blossoming for us, that was a magical time,” recalled former Atlanta resident and activist Gil Robison. “There were people from all walks of life who went [to the bathhouse], and it was a lot more social than you might think. It was an acceptable part of gay life back then.”

Despite the era of liberation many gay men felt a part of, gay sex remained illegal in Georgia, and the social (and sexual) outlets for gay men were mostly limited to bars and their backrooms.

“You were always aware of the possibility of raids, but it was kind of like Prohibition in a way, where it’s like, well that law is on the books, but they’re not [enforcing it consistently],” said Hayward, who added that he felt safer in the bathhouse because it was less likely than a bar to be infiltrated by undercover police officers.

The enhanced vetting and remote location likely helped Flex avoid the wrath of Hinson McAuliffe, who as Fulton County solicitor waged a scorched-earth campaign against obscenity violators that would have impressed General Sherman. McAuliffe gained national recognition for locking up employees and patrons of adult bookstores, massage parlors and strip clubs in Atlanta, with a majority of such establishments closing by the time he retired in 1982.

But having survived McAuliffe’s puritanism, Flex and other bathhouses across the country now faced the most significant threat of the 20th Century.

“When AIDS hit, it changed everything,” Hayward said. “People had to really think about what they were doing, and who they were doing it with, and how they were leading their lives. The thing that was so hard about it all is that [sexual liberation] was something we really prided ourselves on, and it was taken away from us.”

The gay community was divided about whether a bathhouse should continue to exist in the middle of a sexually-driven plague, Robison recalled. In the Georgia General Assembly, the AIDS crisis triggered an onslaught of punitive legislation, from mandatory testing and quarantine, to closing bathhouses and other sex venues.

“The [omnibus AIDS bill of 1988] did get through, but it was one of those things where it had to look bad, but it didn’t really have to be bad – meaning it had to cater to a lot of AIDS hysteria, but it didn’t have to have much substance,” said Robison, who lobbied legislators to vote against anti-AIDS legislation.

Nevertheless, attendance at bathhouses dropped significantly during the 1980s and ’90s, despite the venues being among the earliest promoters of condoms and safe sex awareness.

“Historically, it was unfortunate that when AIDS hit, they would close the baths, because that was such a great opportunity for outreach, and education and to reach people,” Hayward said.

While they’re often considered a vestige of a seedier era of gay life, Robison thinks Flex and other bathhouses might be on the brink of a renaissance.

“I guess there will always be a place for that, that is, anonymous sex,” Robison say. “These days, with PrEP and with treatment leading to undetectable equals untransmittable, I imagine that they will take off again.”