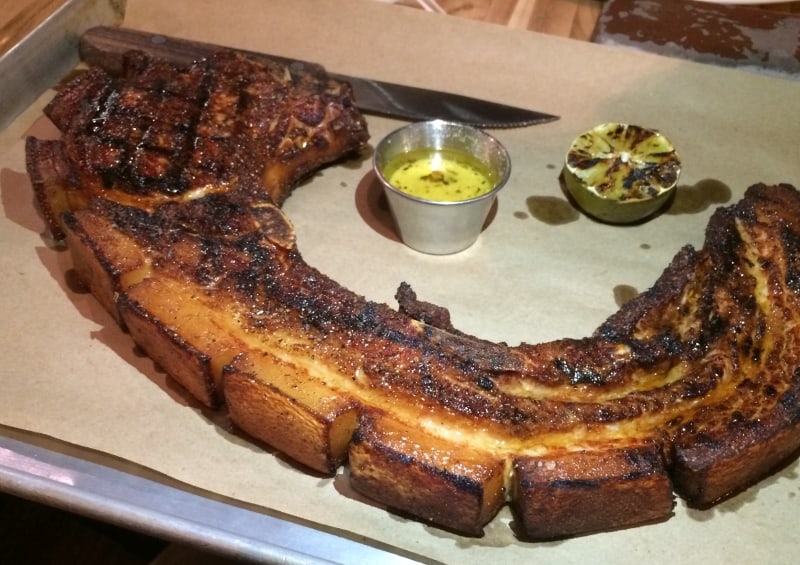 “Who the hell is doing the cooking?” I asked myself several times during a visit to Porch Light Latin Kitchen (300 Village Green Circle, Smyrna. 678-309-9858, porchlightlatinkitchen.com).

It’s certainly not because the food wasn’t good. But owner/chef Alex Gomez seemed to be spending more time in the narrow dining room than the kitchen. He went from table to table, occasionally erupting in laughter. Toward the end of our meal, he even took a seat at our table. I’d heard this from numerous friends, but was nonetheless surprised that I actually enjoyed his company. Believe me. That’s novel.

Over the years, I’ve had many chefs who knew me – Gomez didn’t – plop in a chair and prattle without moving for what seemed like endless periods of time. Friends would glare at me, kick me under the table, and go to the restroom, eventually surrendering to their role as a silent audience until I rudely interrupted the chef by saying, “Hey, my food is getting cold!” or “Whoa! Look at the time!”

Gomez’s food is as good as his company. The main influence is his Puerto Rican background, and his dishes will remind foodies of Hector Santiago’s at the defunct and much-missed Pura Vida. For example, Gomez serves mofongo, one of my favorite dishes anywhere. His is made of mashed yuca rather than the traditional green plantains, giving it a milder taste. The earthy globe is surrounded by hunks of duck confit and sits in a pool of mushroom broth.

Share the mofongo with a few other starters like just freakin’ amazing sliced empanadas. Their crunchy shell is filled with contrasting, velvety “avocado aioli” and braised pork cheek. Even the queso fundido exceeds the usual watery stuff around town. It actually tastes like cheese and gets its hot notes from rajas — diced, grilled poblano peppers. The one starter I didn’t like so much was the conch fritters. The five hushpuppy-looking fritters were far more breading than conch. A chayote slaw and a poblano-spiked remoulade did boost the flavor appeal.

My entrée, the pork chop, was by far the most impressive at the table. The cut is called a “can can” and consists of a curving mass that wraps from the loin to the belly. You get the lean meat of the chop, plus long layers of fatty meat and pure fat turned crispy on the outer edge. I couldn’t even approach eating the whole thing after so many appetizers and – warning – it didn’t reheat well at home.

Most of the other entrees are a bit more prosaic but compelling. Examples are skewers of shrimp and skirt steak with charred pineapple vinegar and red-chile sofrito; halibut encrusted with pumpkin seeds, served with a mango-coconut emulsion; cumin-spiced St. Louis ribs with guava-chipotle barbecue sauce.

There are also four street-food type dishes – sandwiches, tacos, and a burrito. These are all $12 and under, while entrees will set you back $20-$25. Of course, you do have the option of ordering a whole suckling pig two days in advance. We considered it, but couldn’t bring ourselves to look a murdered baby pig in the eye. What else? There are a few groovy sides and condiments, and traditional desserts like tres leches. I couldn’t even consider trying one.

Finally, another warning: Make a reservation for dinner or lunch. If you are not familiar with the metropolis of Smyrna, give yourself plenty of time to find the place. It’s in some kind of maze-like shopping development that we encircled multiple times before spotting it.