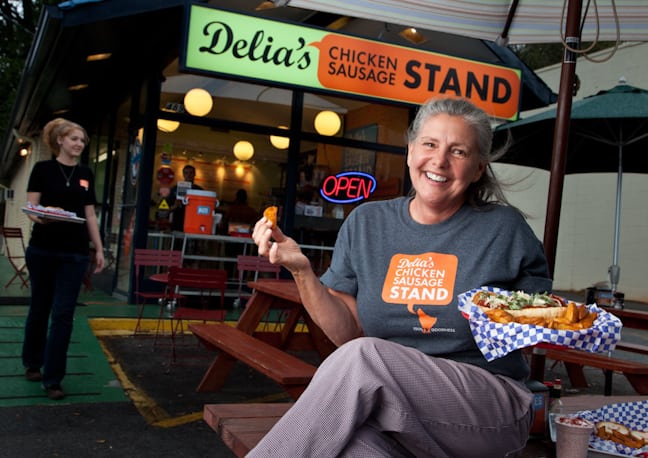 Delia Champion is no stranger to the Atlanta food scene. The openly gay LaVista Park resident opened The Flying Biscuit in Candler Park in 1993, then added a second location in Midtown at 10th Street and Piedmont Avenue in 2000. After selling The Flying Biscuit to Raving Brands in 2006, she worked as a consultant to the restaurant’s new owners, advising new franchisees in The Flying Biscuit way.

“I wanted The Flying Biscuit to be successful and I wanted to understand how franchising worked,” she says.

Over time, however, she grew restless and wanted to get back into the ownership game, missing the customer interaction and serving people quality food. Luckily, she had kept something important in her back pocket after selling The Flying Biscuit—her chicken sausage business.

The product had been available in local grocery stores since 2008. One day the people at the Kroger on Moreland Avenue in East Atlanta Village allowed her to cook and serve the chicken sausage in-store.

“I’d stand there and then one person would come up and then three people and then five people and then I’m in the weeds,” she says. “That’s one of the things that helped me think, ‘Well, maybe I can make a go of this.'”

Just down the road from that Kroger, she found the perfect location; one that allowed customers to get out of their cars and walk right up to the counter to place their orders.

“I got the property and just hoped one person would choose not to eat at McDonald’s and would eat my sausage instead,” she says.

The first Delia’s Chicken Sausage Stand opened on St. Patrick’s Day 2011, and it turned out as lucky as she hoped it would, gaining a loyal and growing following that led to the opening of a second location on Marietta Street on the Westside this past July.

The “ultra casual” way of life

Of all the types of food one could serve, you don’t expect to see a restaurateur cross off all other possibilities and land on “chicken sausage.” But that’s what Champion did.

“When I opened The Flying Biscuit, I really wanted a healthier breakfast that was still steeped in Southern roots and is food that I like to eat,” she says.

Chicken sausage is nutritious, with 70 percent less fat and less sodium than pork, she says. That settled it for her.

While “fast casual” is now a ubiquitous term thanks to the success of chains like Chipotle, Uncle Maddio’s Pizza Joint and others, there’s another burgeoning category called “ultra casual.” Think fewer seating options and with plastic utensils instead of real ones, but the food is cooked from scratch. That’s where Delia’s Chicken Sausage Stand lands.

“You can’t serve the egg until it’s done, so I’m not always fast,” Champion says.

When it came time to open a second store, the Marietta Street location had more than enough of a customer base, with Georgia Tech, Georgia State and several clubs in the area.

“Friday and Saturday nights we’re open 24 hours and all the kids are out at the clubs—all the young, hip and cool people that are nothing like I am,” Champion says with a laugh.

But is there a third location in the works for the chicken sausage queen of Atlanta?

“You have to be careful with real estate, it’s so costly,” she says. “The store on Marietta Street took two years to get it open and build it out. But I’m always looking.”

And don’t look for her to franchise Delia’s Chicken Sausage Stand either. Her memory of doing the same with The Flying Biscuit is less than glowing.

“It’s like ‘A Tale of Two Cities.’ It was the best of times and it was the worst of times,” she says. “Franchisees are the best employees and the worst employees. Some people have leveraged their homes and family savings and I just go ‘Oh my goodness.’ What a responsibility! They’ve given you money and you encourage them to do what you feel is right.”

Although people bill Delia’s Chicken Sausage Stand as a “food truck without wheels,” don’t expect those wheels to begin to roll in the near future.

“I love the food truck concept, but the model is just not there yet,” she says. “I would like five stores before looking at the food truck model again. It’s just so difficult.”

Things are good enough as they are in Champion’s world. Each morning she wakes up, grabs a cup of coffee, heads to a little sitting area in her backyard and pulls up her restaurants’ real-time sales numbers and a manager’s log where employees record their challenges from day to day. Then she visits both Delia’s locations and goes home, ideally no later than 6 p.m. She does this four to five days a week.

“I get to live this charmed life because I have the best employees,” she says. “They bring their heart to work every day even when their feet hurt.”

She also cites the skills of business partner John Amend, who handles all the high level finances of the operation.

As for what 2015 holds in store for her, aside from the business, Delia is spending more time with her longtime partner Wendy. The couple married in Montreal in 2006, and after major portions of the Defense of Marriage Act were struck down last June, she was thrilled to file her federal taxes jointly for the first time this year.

“For me, that was huge. I’m 60. I wasn’t so sure I would ever see that in my lifetime,” she says. “On New Year’s Eve, I write down the milestones of my life. I’ve done that for 20 years. That will definitely be one of the things from this year.”

And if marriage equality came to Georgia, she says she and Wendy would be among the first in line for a marriage license from their home state.

But no matter what, she has no intention of throwing in the towel any time soon when it comes to serving the Atlanta masses.

“As long as it’s fun I’m still going to keep doing it. Nothing is better than having a guest say they love your food.”

Mighty Meatballs
Serves: Do you have to ask?
www.mightymeatballs.com