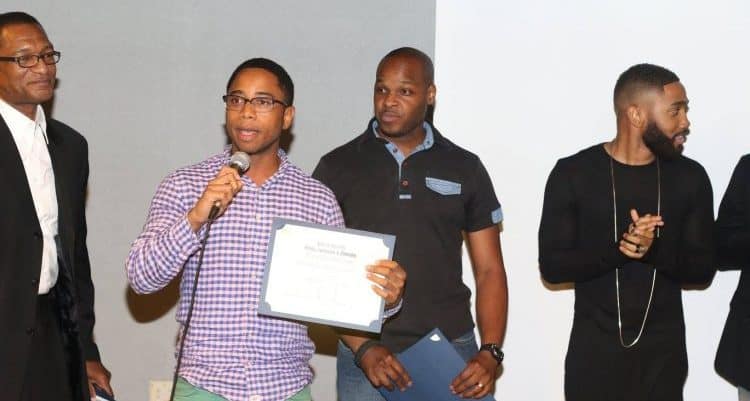 When the Barry Jenkins’ film “Moonlight” captured Best Picture at the 89th Annual Academy Awards, the conversation suddenly shifted towards newer windows of opportunity opening for queer independent filmmakers and people of color. All of this would become fertile ground for the Queer Black Film Festival, a new frontier for black LGBT filmmakers living inside the creative hub of Atlanta taking place Sept. 1 – 3 at The Georgian Terrace Hotel. As a part of Atlanta Black Gay Pride, this relatively young celebration of film is hoping to open doors in the same way “Moonlight” did for indie filmmakers.

“I remember attending a special screening of ‘Moonlight’ in Atlanta, and thinking this film was special,” recalled Courtney Walter, co-founder and one of the three festival directors. “Although it didn’t necessarily influence us in making the festival, it did motivate and inspire us along the way.”

Queer Black Film Festival co-founder Onyx Keesha, also a festival director, stressed that a festival of this caliber was a long time in the making. With both having a background in film, Walter and Keesha felt that many films made by people of color were still being overlooked by the masses, especially in gay media. This prompted the creation of the Queer Vision Film Screening, which started out two years ago during Atlanta Black Gay Pride weekend.

“Keesha and I came together and collaborated with Bishop Oliver Clyde Allen, III, who oversees the Vision Community Foundation – our main sponsor,” Walter said.

But as time wore on, the three felt it was time for a name change to reflect the expansion it has undergone due to its growing size, community engagement and the swell of film submissions. “We started out with just having it on one day, but now it has expanded to three days,” Keesha added.

According to Keesha, there will be one narrative feature, “Red Carpet, Hashtags & Heartbreak,” which will be the opening night film for the festival. This dramedy written and directed by Dravien Harlis was also championed by a number of actors and creative artists in and around Atlanta, exposing the pool of talent and solid networking that Atlanta has to offer.

Saturday afternoon brings “Parallel the Documentary,” a documentary short that follows film director B. Danielle Watkins as she traces her experiences of being the only black filmmaker at a small regional lesbian film festival in Kentucky. A screening of an episodic web series will also be paired with Watkins’ film.

Prior to those screenings, a panel discussion titled “State of Black LGBTQ Cinema,” something Walter firmly believes to be beneficially strategic in building upon the recent successes in black queer storytelling, will be held. Director Seven King, filmmaker Lester Matthews, along with Keesha, Watkins and Harlis will lead that conversation.

Festival organizers hope to break beyond the Atlanta bubble and to make it a destination for black LGBT filmmakers across the country. One of the ways they are working towards that goal will be with an actor’s workshop at Noon on Friday. It will be led by Rhavynn Drummer, a highly respected filmmaker and casting director whose list of credits include working on Tyler Perry’s “The Haves and the Have Nots” and “For Better or For Worse.”

Awards to be given out at Pure Heat

The culmination of the festival will take place at the Pure Heat Community Festival the following Sunday in Piedmont Park, when the festival’s jury will pass out awards for several categories onstage before thousands of Atlanta Black Gay Pride attendees, many of them unfamiliar with the film festival. With Atlanta Black Gay Pride billed as one of the largest Pride celebrations in the country, Keesha believes this opportunity will help generate a larger draw for next year’s festival.

With the exception of the Actor’s Workshop, all of the screenings and events at the Queer Black Film Festival are free to attend, which is a rarity for film festivals. Although they only have one presenting sponsor through Oliver Clyde Allen III’s Vision Community Foundation and are working under the umbrella of Atlanta Black Gay Pride, festival organizers are totally aware that it takes funds, volunteers and community input to make such an event possible. They are encouraging the public to make donations throughout the festivities.

All film screenings, the panel discussion and actor’s workshop will be held at the Georgian Terrace Hotel.

“We love having it there,” Keesha said. “The people staying there – they come down and love to check out what we’re doing. It’s open to everybody.”