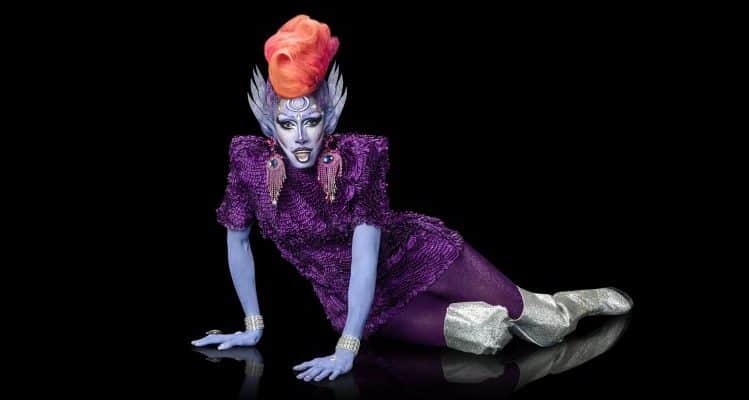 It’s a long time coming. Brown auditioned for the show four or five times, finally making it this year. She said she once thought perhaps RuPaul hated her, but now she believes he was waiting to put certain queens in the right cast.

“I was supposed to be on season eight, but that didn’t work out, so I guess season nine was more so my mix,” Brown said. “I was grateful for it of course, but it’s one of those bittersweet — like thank you, but damn why it took so long?”

Brown said she’d always been an artist, and drawing on paper led to drawing on her face, which led to makeup, which led to drag. One of the signature characteristics of her style is graphic, cartoon-esque effects that complement her transformation into feminine animals and sci-fi inspired characters. There’s also a fair amount of Disney and holiday looks, which make her stand out from the more classic pageant girl style of drag.

“You can’t describe it. I don’t really have a word for it. It evolved up to what it is now. You can’t really put me in a box and I don’t want to be in a box,” Brown said. “My style will always have some kind of sex appeal. She’s a slut; she’d never have sex in drag, but she’s a slut.”

For those who’ll be tuning in to “Drag Race” for the first time, Brown described the show as a mixture of “Project Runway” and “America’s Next Top Model.” Challenges include singing, acting, dancing and sewing, and the bottom two contestants then lip-sync for their lives.

Guest judge this year is songstress Lady Gaga, who Brown said was “just overall a good person to be around.”

“You know when you think of celebrities, you probably have this idea that they’re going to be like, ‘Don’t talk to me, don’t look my way?’ She was nothing like that. She was very nice. I don’t think she was putting on for camera,” Brown said.

As for working with RuPaul, Brown said they connected instantly, and felt “like we’ve been talking for a long time.”

Next up for the season nine contestant? Brown said she hasn’t been approached by anyone to perform in Atlanta in the near future, but will travel to perform as well as keep up with her regular YouTube tutorials and transformations. She said she continues to grow and learn, and had some parting advice for future drag and “Drag Race” hopefuls.

“Doors will close in your face, but one day a door will open for you. Don’t change who you are. Practice your craft and just be the best that you can be, and eventually it will pay off,” she said.