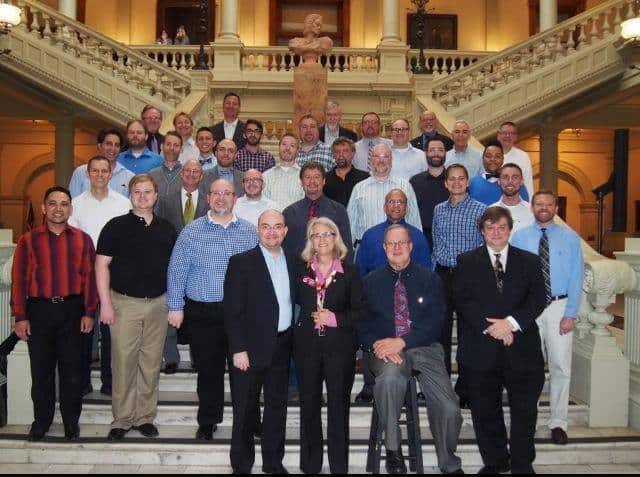 The Atlanta Gay Men’s Chorus is believed to be the first openly gay organization to perform inside the Georgia Capitol and on Wednesday the group of men sang within its stately halls for the second time. Members also took time and lobbied their lawmakers.

AGMC also has a new concert, “When I Was Your Age,”  set for March 27 at Fabrefaction Theatre.

The GA Voice caught up with Kevin Robison, artistic director of AGMC, about the Capitol performance and the upcoming show.

How did the concert at the Capitol on Wednesday come about? Was this the group’s first time singing there?

One person got us in there: Rep. Karla Drenner. She is a fan of the chorus, has sat on panel discussions with us after some shows, and felt it was really important for us to do this. Of course we jumped at the chance.

We are, from what I’m told, the first openly gay organization to perform inside the Capitol building. We’ve performed on the steps for other reasons before, but [Wednesday] was actually our second performance inside. And with everyone in session, legislators knew we were there. Groups that perform there are put on the Capitol calendar, so many of our lawmakers knew it was us. I’m sure some stayed well inside their offices, but Karla encouraged us to march right up to our respective representative’s office and let them know we were there. She told us, “Go fill out a slip of paper and ask that it be passed to your rep and invite her/him to come out and say hello.”

I love that woman. She is a powerhouse, but she’s not pushy to the point where no one listens to her. Personally, I think there’s a large part of the metro LGBT community that thinks they’re not doing enough and change isn’t happening as quickly as it should be. Well, this is Georgia, it ain’t gonna be easy, y’all. I think our openly gay legislators are using a progressive approach that will pay off in the end. I hope our community can be patient with that, because I think it’s the only way things are going to change in this state.

We’re embracing that philosophy as an organization and hope that other organizations can find better ways to connect with our straight allies. We recently created an umbrella organization called Voices of Note, which is the governing body of both the Atlanta Gay Men’s Chorus and the newly-formed Atlanta Women’s Chorus, led by an LGBT ally, Melissa Arasi, and comprised of straight and lesbian women alike. We are a unique organization in that regard. We believe that by sequestering ourselves from people who can help us is not progressive. And I think that’s what we’re all looking for: progress.

Can you tell us a little bit about the show and what those in attendance can expect?

“When I Was Your Age” is a work of choral theater and, apart from some preexisting music, is an original work. We began the creative process by asking members of the chorus to complete a survey about their relationships with their father figures. Many did, which was very helpful in establishing some common themes; but many chorus members felt that they just had to write and get it all out – and by that, I don’t just mean anger or frustration or how difficult things were – there was plenty of that, but there were some amazingly positive stories as well.

The next step was to determine some over-arching themes while at the same time pulling together options for music. One of our singers with a great background in theater, Christopher Repotski, took the lead on the thematic elements, and our creative team of 10 singers began searching for songs that might work with this subject matter. Once the themes were determined (a couple of which are stunningly unique), we looked at specific stories that suited the themes while keeping the song list at hand.

Christopher and I have had a blast writing this show. We’ve laughed, cried, and sometimes just shook our heads, thanking the universe for handing us some incredibly brilliant ideas that made us think, “Where did THAT come from?” As with most creative work, it’s like it’s already out there, waiting to be discovered, and you feel so lucky when you’re the one who gets to unearth something amazing that no one’s found yet.

What can the audience expect?

The need for tissue. This is not a total tearjerker, but there are some moments. (We tried to get Kleenex as a sponsor, but that didn’t happen.) As performers, we are still working through the emotion of this material ourselves.

Since the first rehearsal, I’ve had to give all 100 of these men permission to stop singing at any given time and have their “moment.” I see that happen in every rehearsal. People crying through tears, laughing through them, and sometimes just remaining in their seat with their face in their hands. Some have even had to leave the room. It’s been great! But the audience should also know that we have not forgotten the very important need for a sense of humor with subject matter like this. One story is about a father who was never present in his son’s life, and while the story is very sad, the juxtaposition of the attending music turns out to be hilarious.

If I had to compare this show to films, I’d say it’s more like “Steel Magnolias” than “Dead Poet’s Society.” The stories are mostly told in the form of monologues by some very talented actors in the chorus. But only one person is telling his own story, which is unique. It comes in the very middle of the show and is literally pivotal. Finally, this is a one-act that runs about 60 minutes. That’s plenty for a show like this.

How is it different from previous AGMC concerts?

It is not a “stand and sing” show. The Fabrefaction Theatre provides the perfect space for this piece. It’s unique in that it’s a very large, wide stage but an intimate house of less than 10 rows.

Also, we’re using a significant amount of multimedia projection in this production. The image design (the show logo, as I call it) is the silhouette of a father and son in two open panes of a window. On stage, the window comes to life in the form of a screen. On it, we project photos of us as children, humorous cartoon effects, and old home movies to propel the journey along.

Plus, this show is unique in that it doesn’t begin with music. It begins in darkness with the spoken voices of the chorus as fathers who are kicking their sons out of the house. The lights come up on a young man who sings, a cappella, before leaving with his duffel bag. Then we segue into the quiet opening number.

Some shows have flashy openings, but this is what I call an emergent one. The show also ends with the same character on the stage, alone this time, singing the same song, but with a different perspective. He’s all grown up, and he’s all good. That is all I’m giving away. (I will get a text from Christopher chiding me for even sharing that much.)

Also, a very intentional choice on our part was to avoid using the word “gay” as much as possible. We talk about being different, coming out, not being the son our father’s expected, but there is only one time in the show where the word “gay” is spoken and it’s done by one of our straight (yes!) members as he tells his own story. He’s amazing and it’s an amazing moment in the show. This is not just about gay men and their fathers – it’s universal.