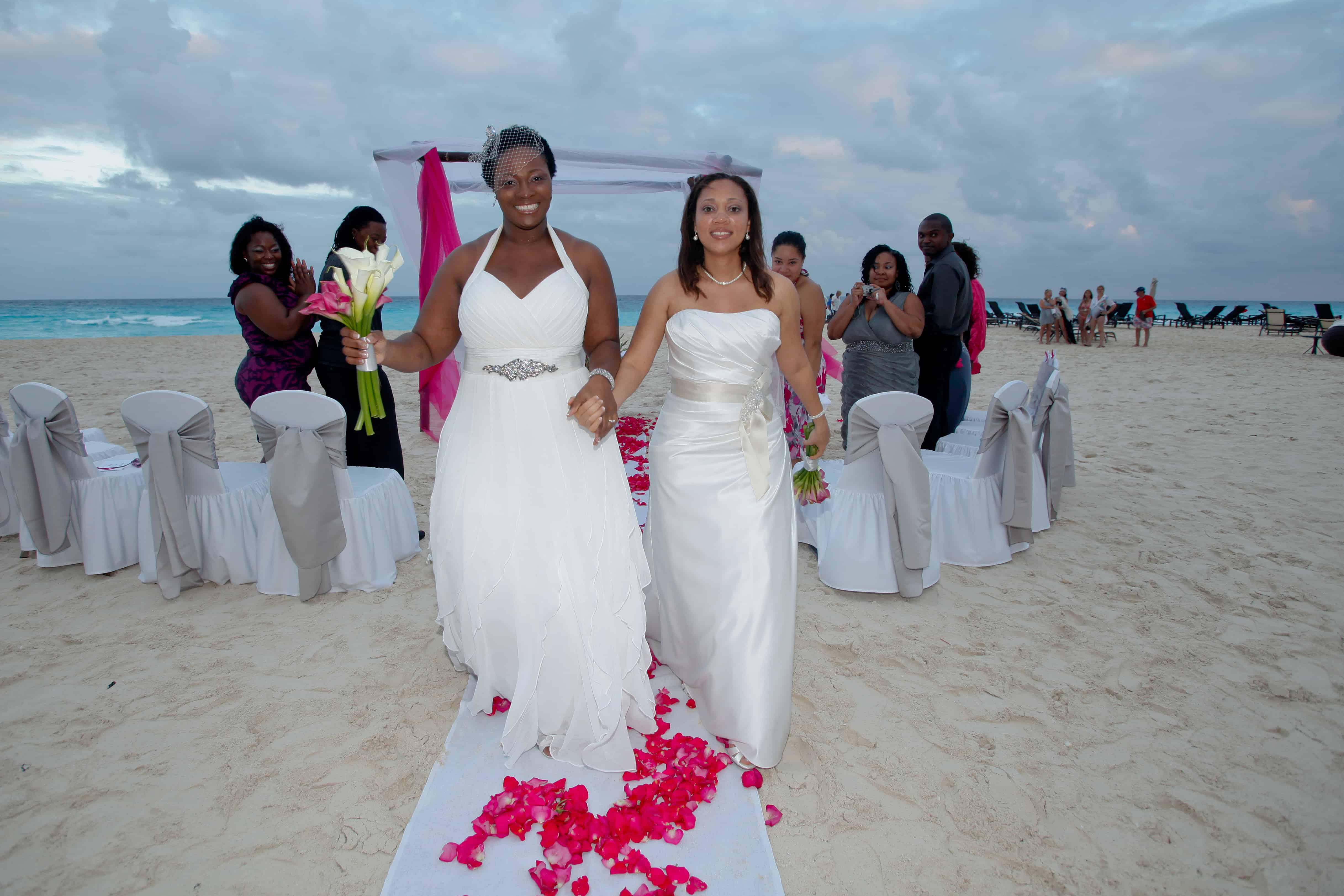 Shmetrice, a registered nurse, and Brooke, a program consultant, first married in Brooklyn, N.Y., but they celebrated with a wedding ceremony on the beaches of Cancun, Mexico, two months later. With a sparkling turquoise sea as the backdrop, Shmetrice and Brooke tied the knot in a spiritual-based beach wedding, which included a ring exchange of matching five-diamond platinum bands and a sand ceremony. “We used fuchsia and gray sand to match the colors of the ceremony,” says Brooke. 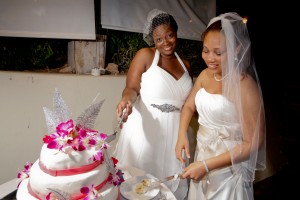 Their romantic wedding reception was held on the resort’s deck, which overlooked the beach. The décor of orchids, silver chairs, fuchsia roses and floating candles added to the elegance of the evening. The brides danced together as wife and wife to Natalie Cole’s “Inseparable,” because “it describes our relationship since the beginning even as friends,” says Shmetrice.

The Atlanta women were able to bring a little Atlanta flavor to their wedding by hiring DJ Glass Dee to create their jazz and R&B playlist for them to play on an iPod hooked up to the resort’s sound system. Their seven wedding guests were welcomed to the resort with a monogrammed beach tote, a monogrammed T-shirt, two pairs of flip-flops, sunscreen and a large, diamond ring paperweight.

“After finally making the leap, we felt excited and ready for a new beginning as a married couple,” says Brooke. “We felt like the ceremony in Cancun completed our NYC marriage.” 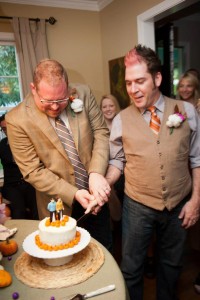 “Star Trek” fans Patric Bell-Good and Darin Good were made for each other. Their symbiotic sense of humor and attention to creative details shine through in the telling of their love story. Patric, a local chef, and Darin, a marketer, got engaged on Patric’s 41st birthday with a proposal from Darin complete with a ring from Tiffany & Co. They spent about a year planning their elaborate DIY wedding, set in their own backyard on a gorgeous fall afternoon. The Atlanta grooms went for a bountiful harvest theme, drawing upon natural elements for their wedding décor of pumpkins, corn, birds and cotton with hay bales for guest seating. Their ceremony was unparalleled in its creativity.

Both grooms were escorted down the aisle by their mothers. Patric donned an outfit of denim jeans, purple Converse, a blue gingham shirt, an orange-and-blue tie and a light brown vest, and Darin sported brown Converse, jeans, a white striped shirt, a blue-and-orange tie pulled together by a light brown sports jacket. Their boutonnieres were zinnias and bolls of cotton. Their ring bearer dressed like Patric, even matching his funky hairdo. 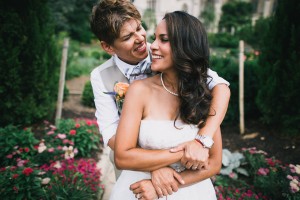 Atlantans Eve Wernicky and Cassandra Castillo eloped to Washington, D.C., to legally marry at The Bishop’s Garden at The National Cathedral, surrounded by their closest friends and family members. They hosted a reception at the Southern Hospitality restaurant.

On what Cassie calls a “perfect summer day,” she says her favorite part was “arriving at the gardens and being greeted with our loved ones, teary eyed and filled with joy.” She continues, “We wrote our own vows and personalized the wedding ceremony readings. My mother picked the flowers and Eve’s mom let borrow her chai pendant. I also had a rosary my grandmother had given me pinned to my bouquet.”

“Cassandra was distracted by a bird and her babies during the ceremony,” Eve says. “A bird flew above my head with a worm and began to feed her four babies right above me in a nest. After the ceremony, family members took turns taking pictures of the baby birds.”

A longer version of these articles first appeared in Atlanta Gay Weddings, which is co-published annually by Georgia Voice and EquallyWed.com, and can be read at AtlantaGayWeddings.com.