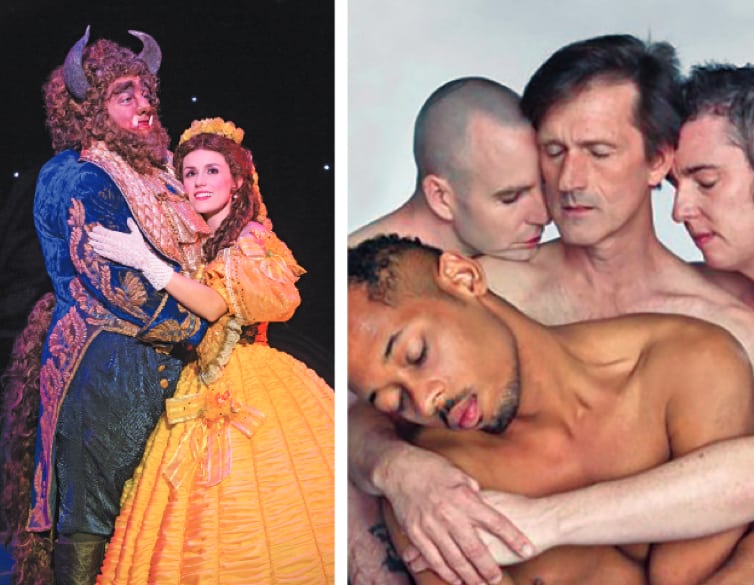 Theater: Curtains up on ‘The Missing Generation, ‘Beauty and The Beast

One is an intimate dance performance revolving around AIDS survivors; another is a national touring show featuring a gay actor. “The Missing Generation,” debuting at 7 Stages, and “Beauty and the Beast,” courtesy of Broadway Across America, are two drastically different pieces of theater hoping to bring in crowds.

Dancer/choreographer Sean Dorsey—who is transgender—and his acclaimed troupe Sean Dorsey Dance are bringing “The Missing Generation” to town. Through dance, theater and storytelling, it looks at how AIDS affected an entire generation of the gay and transgender community in the 1980s and 1990s.

Dorsey started his research when he was in Atlanta for his show, “The Secret History of Love,” in 2014. With that, he spoke to LGBT elders about growing up gay. He was surprised by what he learned.

“I was struck at the absence of an entire generation of people who I couldn’t capture or express,” he says.

When Dorsey started, he knew he wanted to do archival research. “I wanted to do oral history with people who lived there at the time of the AIDS epidemic. What I learned is that this project was different than what I conceived. I was moved to make not just a beautiful dance show, but a vehicle to give voice to long-time survivors of the epidemic,” says Dorsey. “What history we do have is tiny, not taught to other generations. We don’t talk at all in our culture about those people who are living with this unimaginable mask of grief at a time of extraordinary discrimination from the government.”

The piece debuted last year in San Francisco, the troupe’s home, and has crisscrossed the country.

As part of his research, Dorsey talked to people both HIV negative and positive, some who’ve been living with the disease more than 30 years, as well as health care workers and activists. Especially important was to bring in transgender voices and discuss their particular struggles.

Among those in Atlanta he talked to are “Dream Boy” author Jim Grimsley, trans activists Dee Dee Chamblee and Cheryl Courtney-Evans, and Gert McMullin, who was instrumental in starting the AIDS Memorial Quilt.

As part of the run, 7 Stages will be hosting “Generations Positive: Exploring The Impact of HIV/AIDS in LGBTQ Communities, Past & Present” on Feb. 7 at 1 p.m.

Out performer David Grindrod is part of the ensemble in the touring version of “Beauty and the Beast,” playing several characters, including a pepper shaker. A recent alumnus of Pace University in New York, the Annapolis, Maryland, native graduated in May and realized that—as a musical theater performer wannabe—much of his time would be spent auditioning. This is not the first big tour for him; he played Mark, one of the gay characters in “A Chorus Line,” as well. Yet this is his first major gig after school. Luckily he was cast without much fanfare and started in September.

“Beauty and the Beast” is a musical that he has learned appeals to all audiences, but he does think that LGBT people can empathize with the Beast, who is an outsider. “It’s about looking past someone’s exterior to really see who they are,” he says. “The Beast transforms into someone Belle can fall in love with. He wants her to see who he really is inside.”

‘Beauty and the Beast’