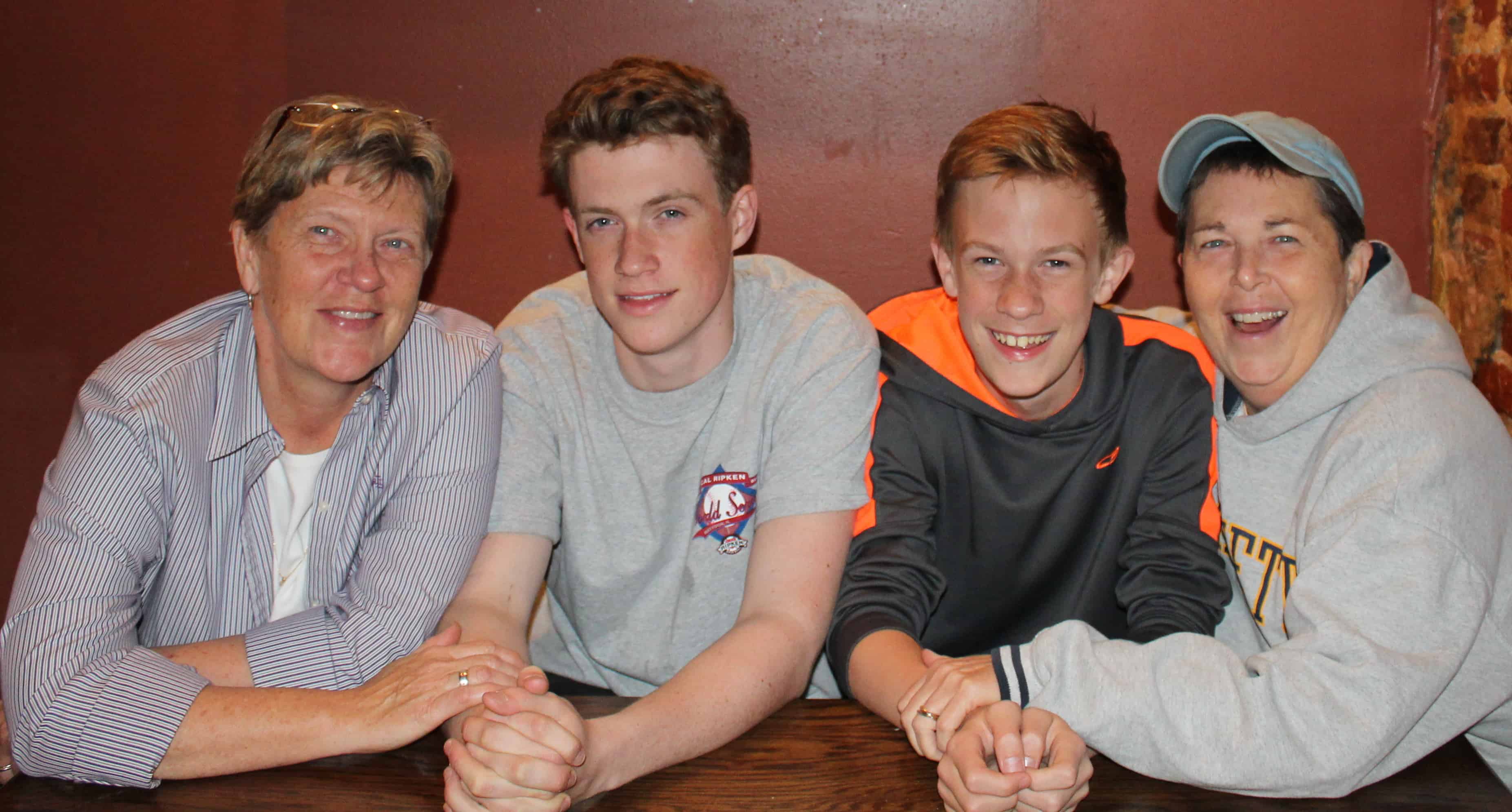 John Brogan stuffed a handful of Universal Fries into his mouth after finishing his shift as a dishwasher at the popular Universal Joint in Oakhurst.

He and his moms, Linda Ellis and Lesley Brogan, chuckle knowingly.

It’s a busy night at the restaurant and bar, and the family is sitting around a table on the patio, discussing how their family may seem different to some, but in reality is just like most families—doing their best with what they have.

The two moms are raising two sons, John, 16, and Sam, 13, with two dads, John Blevins, the biological father, and his partner, Rande, in a very intentional way. 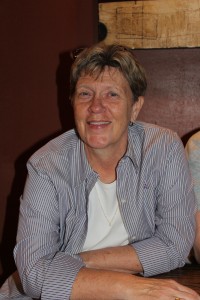 Ellis, the executive director at The Health Initiative, and Brogan, an ordained minister who works with HIV/AIDS clients, both went to the Candler School of Theology at Emory University and fell in love soon after meeting in August 1988.

“We had an amazing courtship throughout our time at Emory. We quickly became the lesbian couple in that circle. And we had amazing support from faculty and other students,” Ellis says. “It was an incredible place to grow a relationship.”

After they graduated from Candler, the two held a commitment ceremony on Nov. 1, 1991, and began a life together in Atlanta.

Co-parenting covenant
It was about 1997 when the two women began seriously discussing starting a family. They both knew they wanted more than just an anonymous sperm donor.

“It was very important to us that our children would have a sense of where they are coming from and who they are connected to. We wanted and needed to know that our kid had a father,” Ellis says. “The role of the father and the male and masculine role is just as important as that of a mother.”

Deciding against an anonymous sperm donor, Ellis and Brogan turned to their male friends. Enter John Blevins, also a graduate of Candler School of Theology and a friend of Brogan’s, who also worked with HIV/AIDS clients.

One evening about 16 years ago, the three met at Einstein’s in Midtown and ordered drinks to discuss how to create a family. There were likely a few rounds of drinks that night.

Before the conversation ended, Blevins said he didn’t just want to be a sperm donor, but he was willing to talk about co-parenting.

In the months following, the three vacationed together, spent weekends together, and discussed what their family would look like and what they wanted for their children.

In the end, a co-parenting covenant was drawn up.

The covenant spelled out what the family tree would look like. Ellis and Brogan would be known as “primary parents,” giving them ultimate decision-making authority. “No parenting by committee,” Ellis explains. “But that in no way lessened his role as a father. And our home would primarily be home, but John would always have a place and our child would be able to go back and forth and know both places as home.”

This was not a legal document, not a contract, but rather the best intentions and understanding the three had of what they hoped to become as a family. Also at the time, they all agreed to call Atlanta home—and for Blevins, who was single at the time, that was a major sacrifice.

‘Home was what I created with her’
Lesley Brogan knew nothing about mothering. She had never changed a diaper, never babysat. And when they found out Super Bowl weekend of 1998 that Ellis was pregnant, her view of the world was about to be opened much wider than before.
“The most significant thing to happen to me is falling in love with Linda. The world became so much bigger than I truly thought,” Brogan says.

Raised in a socially conservative “3-stoplight town,” the truth was that after she came out, she could never go home again, she says.

“So home was what I created with her,” she says.

Three years later, Sam was born. While Brogan may have thought it would be easier the second time around, parenting is parenting—never very easy.

And for Sam’s birth, Blevins was now in a relationship with Rande, so now there were four parents deeply involved in raising two boys.

There did come a difficult time in the parents’ lives when, after Sam was born, Blevins agreed to surrender his parental rights to his sons so Brogan could adopt them.

“We tried to make the legal case for three parents … but we couldn’t win that case,” Ellis says. “While it was a difficult decision, it was a decision made to give the boys the best legal protection.”

Blevins and Rande, who declined to be interviewed for this story, are very much a part of the boys’ lives. The boys spend the weekend with their dads, go on trips with them, and learn discipline from their fathers.

“My dad, Rande, he’s the strictest. With my dad, John, we sing in the car together. It’s like four senses of families,” says John Brogan. “It’s also cool to have two Christmases.”

A family with many branches, extended roots
Their family is like a tree with roots that keep growing and spreading. At first Brogan’s and Ellis’ parents had a difficult time understanding their relationship, much less their desire to be parents. But before Brogan’s mother and father died, they moved to Decatur to be close to their daughter and grandchildren, expanding the family tree’s roots.

Ellis’ mom is now the matriarch of the family, and traveled with them last year on a trip to Africa.

And they understand that, while it may not always be easy on the boys, there is no doubt John Brogan and Sam are surrounded by much love.

“There are four different styles,” Ellis says of their parenting.

“There are differences in age, race, gender, career differences,” Brogan adds. “But when we went to Africa and I could watch the boys with the three other parents, and see all the love they are surrounded by, I was just overwhelmed. They are so lucky.”

But having such a family means sometimes having to educate others.

So the parents sat down with teachers and explained their family dynamic, and the teachers admitted they had just never thought about it. But this simple family tree drawing led to their explaining to John Brogan and Sam that many families do not fit the standard picture. 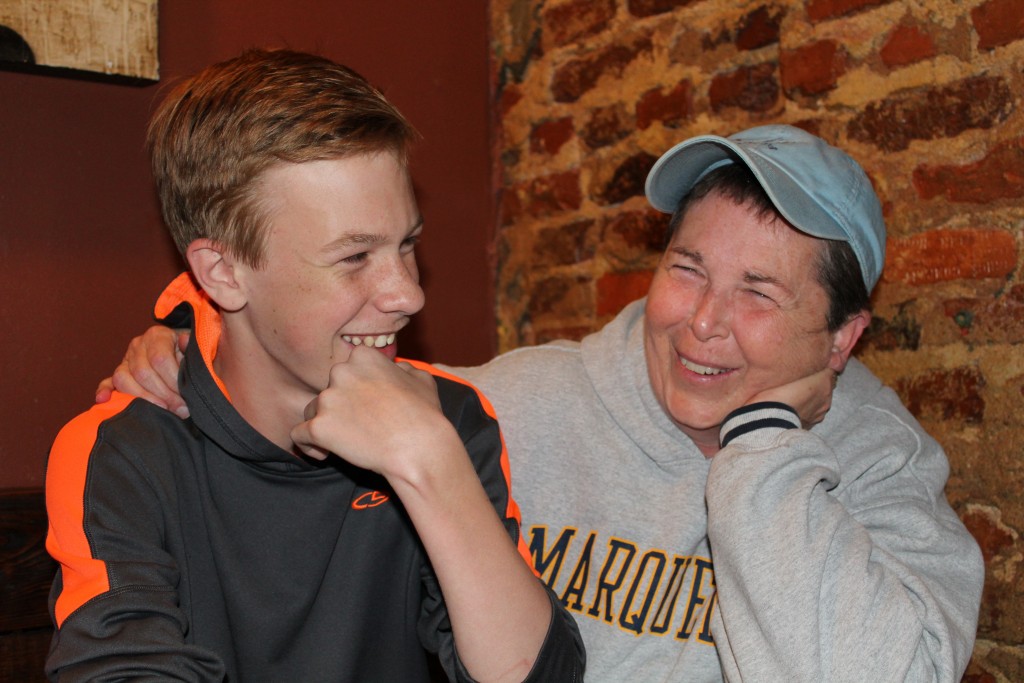 For Sam, being raised by two moms and two dads means there is always someone to talk to. It also means he knows who to go to when he wants something. For example, if he wants to stay out past curfew? Well, Lesley, or Les, as the boys call her, is the one who will usually give in. The two lean in for a hug and laugh after this confession. 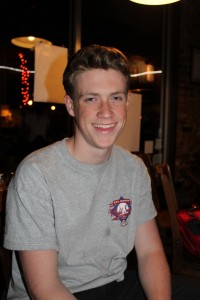 “Family is what you make of it,” he says.

He knows his family is different, but living in progressive Decatur provides him a cushion from anti-LGBT bullying. In fact, most of his friends think it’s pretty cool to have two gay moms and two gay dads.

Ellis says she and Brogan and the dads have been intentional about ensuring there is a community of support surrounding them and their family.

“We have this village that travels with us. We are family,” Ellis says. “What’s most important for us is that we encourage institutions that frame our lives: academic, civic, faith—that they have what they need to support us so we can fully participate and donate to the community around us,” she adds.