This is almost exactly what was stated earlier by spokesperson Kim Jones this afternoon:

“All we know right now is that Bob Jamerson, who performs on the street as ‘Baton Bob,’ has been arrested after reports of some sort of verbal altercation with security at 1197 Peachtree Street. An off-duty Atlanta Police officer working for Midtown Blue was called and made the arrest. Precise charges are pending. He will be transported to the Fulton County jail.”

Here’s an apparent photo of Baton Bob being arrested that was posted to his Facebook page. He was performing in a white tutu and white mask to celebrate the Supreme Court’s ruling on DOMA.

Many know the Baton Bob character was born after 9/11 when Jamerson lost his job as a flight attendant. Looking to bring himself some joy, he revived his hobby of twirling a baton and taking his show onto the streets of St. Louis, his former home city, for others to enjoy as well.

When he moved to Atlanta, Baton Bob became a hit with all residents — gay and straight alike — who enjoyed seeing a grown man in a tutu and tiara twirling a baton and tooting his whistle to let passersby know the “Ambassador of Mirth” was in their midst.

“This spirit is bigger than I am. I am only the vehicle,” Jamerson, 60, said of Baton Bob in a GA Voice story last August.

This is not Baton Bob’s first run-in with police. He’s complained frequently on his Facebook page of being allegedly harassed by law enforcement while parading in Buckhead, according to Project Q Atlanta.

He also called on police last June when he said he was confronted by a stalker and called an anti-gay slur.

UPDATE Wednesday evening: Baton Bob was charged with two counts simple assault and one count of obstruction of officers. He was being held in the Fulton County Jail on $4,000 bond and as of late Wednesday was still in custody. 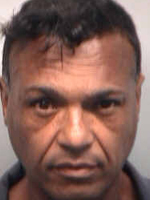 “The victims state that he has been told previously to stay off the property. While talking to the suspect, the victims said that he stated, ‘Fuck you, I’ll fuck you up.’ The suspect began to call both security guards bitches and told them, ‘don’t fuck with me, I’ll fuck you up.’ The suspect continued to threaten and use obscenities when one of the victims called Sgt. Briggs at Midtown Blue,” according to the report.

The report further states when APD responded to the scene, Baton Bob was on the corner of Peachtree Street NE and 14th Street NE blowing his whistle and dancing on the corner.

“The suspect was dancing and gyrating in a sexual manner on the city sidewalk blocking pedestrian traffic,” according to the report.

Both victims told the responding APD officer they wanted to press charges and when the officer approached Baton Bob to ask him about the incident the officer went to grab Baton Bob’s hand. Baton Bob said, “Fuck you, what’s this about,” states the report.

The officer attempted to grab Baton Bob again and Baton Bob pushed away “in order to get his wrist out of my grip,” the officer reports.

Baton Bob scuffled with the officer and then, according to the report, he kicked the officer’s leg and attempted to kick him in the groin.

The officer states after he was able to get Baton Bob in handcuffs he walked him back to the incident location and while passing the victims, Baton Bob repeatedly stated “fuck you, bitch.” Baton Bob then called the officer a “black bitch,” according to the report.

However, while Baton Bob was being transported to jail, his demeanor changed and he apologized, the report states.

Baton Bob wrote on his Facebook page Wednesday afternoon to look for him performing at the same location on Thursday after he gets out of jail:

“First of all, the atl police officer that responded to the incident thru security has been very respectful and gracious to me even in handcuffs. So, the situation escalated from a complaint from a security officer in the area and for some reason she rolled up on me like she didn’t know who I was and like I had not been there before. For them to call police to come to intervene was not necessary. So, out of it, because of my fury, the Atlanta police officer did not understand the elements of the situation, so he was trying to do his job, respectfully and arrested my ass!!!!!!!!! I’ll be out tomorrow so look out for my show at 14th and Peachtree. So now I’m waiting to be transported so I can sign my own bond and get the hell out of here. I want to verify, that the Atlanta police was respectful to me considering the circumstances. See you when I see you!!!!!!!!!!!!!!

Here’s a copy of the full police report:

Top photo: Baton Bob at a this year’s MLK March. (by Dyana Bagby)