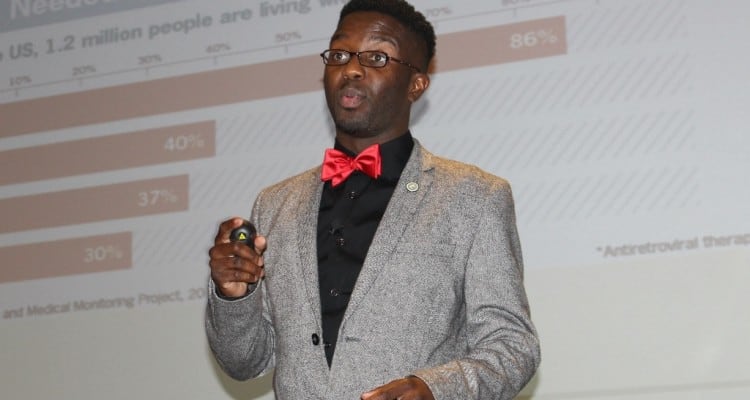 Atlanta’s LGBT community isn’t just represented by a number of delegates at this week’s Democratic National Convention. Now word comes that the community will be represented on stage as well, as gay Atlanta man Daniel Driffin has been tapped by the Hillary Clinton campaign to speak about living with HIV on the big stage on Wednesday during the 4 p.m. hour. The first time an openly HIV-positive speaker has ever spoken at a national convention was in 1992, when President Bill Clinton accepted the nomination for president.

Driffin, a founder of Atlanta-based HIV/AIDS nonprofit THRIVE SS and an adviser on the Fulton County Task Force to End HIV/AIDS, made the announcement on his Facebook page late Monday and the Clinton campaign confirmed his appearance to Georgia Voice. From Driffin’s Facebook announcement:

So excited to finally share this… I have the opportunity to speak this Wednesday at the Democratic National Convention in Philadelphia, PA! I was selected based on the work, and countless people believe that I would do this amazing opportunity Justice. I cannot believe it. I CANNOT BELIEVE IT. I might be the first openly Black gay man living with HIV to deliver an address on #HIV #TasP #PrEP #MIPA #INCREASE #THRIVESS

Dr. Melanie Thompson, founder and principal investigator at AIDS Research Consortium of Atlanta, celebrated the move on her Facebook page as well and gave some background on how it came together:

Our HIV/AIDS coalition, the same one that met with Hillary a couple of months ago, persuaded the Clinton campaign to include an HIV+ speaker at the Democratic convention. I was happy to nominate Task Force Co-Chair Daniel D Driffin, who ultimately won the most votes from the coalition members and was recommended by us to speak. Today it was announced that Daniel was chosen by the campaign and will speak for 4 min in the 4pm hour on Wednesday. So tune in on Weds and look for his sweet face and inspiring words! Can’t wait. Go get ’em Daniel! We need your voice to ‪#‎EndAIDS‬ in Fulton County, in the South and in America!

“Short answer, this happened due to people believing in the work that I have dedicated my life to over the past decade,” Driffin wrote Georgia Voice while on a plane to Philadelphia Tuesday afternoon. “I plan to talk about the fact that HIV/AIDS is still an important issue for black gay, bisexual and same-gender loving men and transgender women of all ages. We have a one-in-two lifetime expectancy of being diagnosed with HIV if efforts are unchanged. One-in-two. We have to create an elevated conversation on ensuring people living with HIV have access to safe, culturally appropriated care, and that other black gay men and transgender women who are seronegative have the right to stay that way with the help of PrEP. We need to scale up these prevention modalities especially in the Deep South or any community with my brothers and sisters. Lastly I hope to mention the importance of my community of black gay, bisexual, same-gender loving men and transgender women have always played, but oftentimes those narratives were erased from the screenplay of magazine articles.”

“In his time as a 2015 Youth HIV Policy Advisor, we saw Daniel Driffin emerge as a leader in local HIV policy advocacy and we are thrilled to see him offered this national platform,” said Emily Brown, field organizer for Georgia Equality and a leader of the HIV Youth Policy Advisor program. “Daniel Driffin epitomizes what the South needs in this fight against HIV. He’s a brilliant, young, black, gay leader who is unapologetically living and thriving with HIV, and he’s not staying silent about any part of it.”

You can view Driffin’s speech on either C-SPAN’s livestream or the Democratic National Committee’s livestream. For a look at Driffin talking HIV/AIDS,  check out this PBS segment from earlier this month on the HIV epidemic in Atlanta.