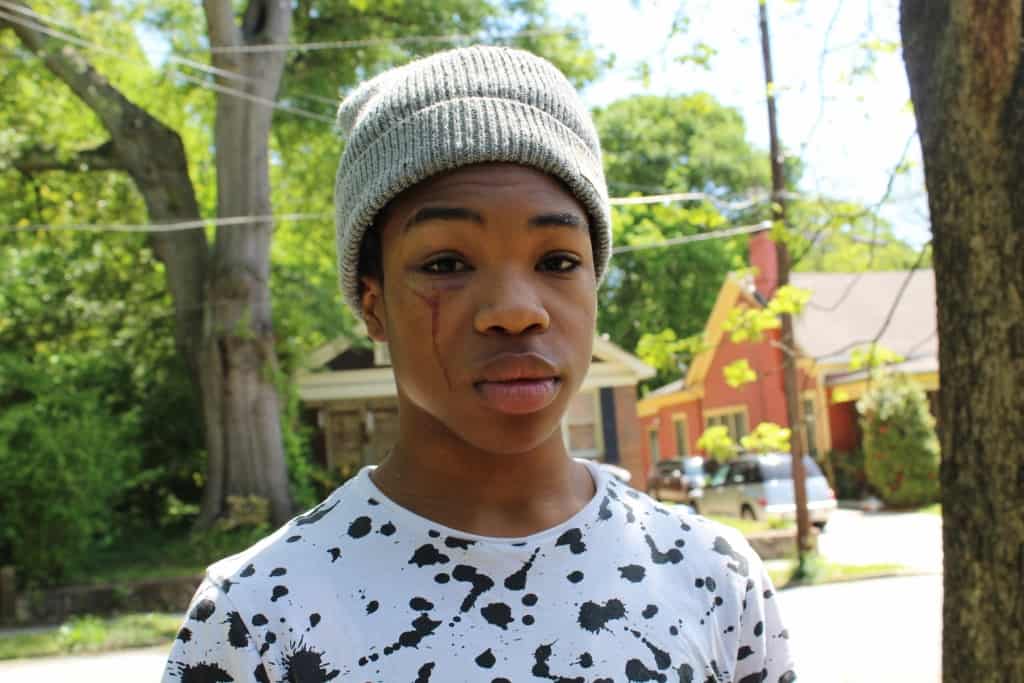 Timothy Jefferson, 16, has known he is gay since he was in the seventh grade. As a student at Carver School of the Arts, part of the Atlanta Public Schools system, he’s been openly gay since the first day of class at Carver.

“There’s lot of gay students [at the school], girls and boys. Some on the down low,” says Timothy, in an interview at his home.

“Everyone knows I’m gay,” he adds, noting he’s been constantly harassed and bullied by other students during his two years at the school where he’s studying to perhaps one day be an interior designer or a musician.

On Monday, April 20, Timothy said he and his best friend, Zyderryo Brown, 17, were walking on campus when Brown was attacked. Timothy said he tried to break the fight up and then he was jumped by other students. The fight then moved to the school’s courtyard where the crowd grew larger. Timothy said he there were about 15 people attacking him and another 15 attacking Brown.

“I started fighting the person who hit me. They stabbed me in the eye with a screwdriver and hit me on the head — I have a big sore on top of my head,” he says. “They were stomping me on my back and chest and I looked over and saw them smashing Zyderryo’s head on the sidewalk. We kept getting jumped. There were at least five or six rounds of us getting jumped.”

Timothy said no adults—no administrators, police officers or security guards—were on hand to break up the fight. “There was no sympathy, no concern or anything,” he says.

Timothy says he was shouting for the assailants to stop and that they were yelling at him, saying they were going to “beat your faggot ass” and calling him a “gay ass nigger.”

“We got into a fight because they don’t like us because we are gay,” he says. “During the whole fight I was saying, God, please don’t let me die. The screwdriver could have hit me anywhere.”

There is no gay-straight student alliance at the school, Timothy adds.

After other students were able to eventually break up the fight, Timothy said he got on the school bus to go home and then went to Hughes Spaulding Hospital where he was treated for a bleeding gash to his face. Brown also went to the hospital.

Atlanta police officers questioned witnesses to the fight and, according to the police report, a female witness told police when she saw the crowd of students at the school and asked what was happening, she was told, “they beating them faggots.”

In the hospital ER, Brown told police said he and Timothy were beaten up “because they were gay.” Brown suffered a bloody mouth, loose front teeth and bruises on his body from being kicked while on the ground, according to the police report.

Timothy says he has been in fights before at the school because he is gay and that he is suspended for fighting. He also says there are many gang members at the school.

“Well, now that I’m more mature, I can’t do anything about them saying anything to me. I block them out,” he says. “But it gets tiring hearing ‘faggot, sissy, gay.’ And sometimes I do say something back,” he says. And in the past, the bullying has led to fights—and suspensions, he says.

“Every time it gets out of control, we get suspended,” he says.

“I’m afraid for him. I’m afraid … he could have been killed,” she said with tears in her eyes. “It’s possible he wouldn’t have come home. I don’t want to send him back and know that I may not see him again.

“They don’t see him as a person because of who he is, because he is gay,” she adds.

The Atlanta Police Department released a statement late Wednesday saying an investigation into the attack shows the fight was not actually a mob scene but rather a fight involving only four students. The fight will also not be investigated as a hate crime.

“The subsequent investigation of a fight on the New Schools of Carver campus on April 20, 2015 has revealed that the incident involved four people. These students were involved in a fight with each other with approximately 100 students watching the incident. This altercation will NOT be classified as a hate crime because it does not meet the requirements of such. Three of the 4 students are juveniles. The juveniles will be charged with the State charge of Affray. The 4th student Zy’Derryo Brown DOB 10/12/1997 will be given a copy of charges for disorderly conduct,” said APD spokesperson Elizabeth Espy said in an statement.

“Affray” is a charge of fighting in a public place and is a misdemeanor.

WSB TV has done a previous report on the number of violent fights breaking out at the school:

The Atlanta Journal-Constitution in 2013 also reported on the many fights that have taken place at the New Schools of Carver, including a gun being brought on campus.