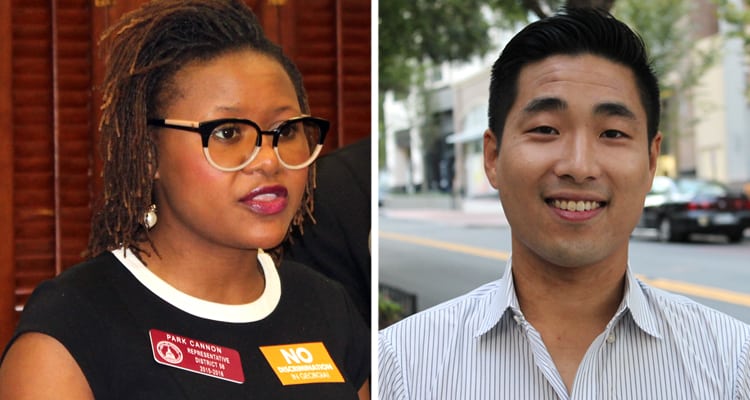 The electoral spring of 2018 opens with a run. Several, in fact. There are four openly LGTBQ representatives in the Georgia Legislature. Two of them face opposition in their upcoming races. Whatever weather fall brings, a season of change is guaranteed at the Capitol.

The statewide date for primaries is May 22, followed by primary runoff elections on July 24, with the general election on Nov. 6. Currently, the four openly LGBTQ politicians in the Georgia House are Reps. Karla Drenner (D-Avondale Estates), Park Cannon (D-Atlanta), Sam Park (D-Lawrenceville) and Renitta Shannon (D-Atlanta).

Shannon and Drenner will run unopposed. Park will face an electoral challenge in the general, and Cannon faces a primary challenger in May. In 2016, Park beat Republican Valerie Clark in Gwinnett by 400 votes. He’ll face her again in the fall. Cannon’s contest involves beating Democrat Bonnie Clark for the party’s nomination.

The numbers of openly LGBTQ candidates are growing: last year in Atlanta, 16 LGBTQ candidates vied for office, including Cathy Woolard’s mayoral campaign and Alex Wan’s attempt to claim the City Council presidency. This year, a significant number of LGBTQ politicians are running for office. One of them is Matthew Wilson, a gay Brookhaven attorney and Democrat who is running to represent House District 80. Another is Valerie Vie, a gay attorney in a rematch in District 62.

Of course, there have been other LGBTQ politicians in recent Georgia history, such as Keisha Waites, Joseph Geierman, Stephe Koontz, Rashad Taylor or Woolard (the first openly gay elected official in Georgia history). But according to NBC News, 2018 is unique: “[Victory Fund] expects to endorse more than 150 LGBTQ candidates this cycle, making it the biggest endorsement slate in the organization’s 26-year history.” Nor does their list comprise the total catalog of LGTBQ candidates who are on ballot this year.

The 2018 slate of LGBTQ Georgia candidates includes individuals such as Richie Knight, the Athens mayoral candidate and first openly gay candidate to qualify for office in Athens-Clarke County. But for obvious reasons, the current officeholders are drawing the lion’s share of the attention.

The names of Cannon and Park are familiar to long-time poll-watchers. Both are endorsed by the Victory Fund. Park was the first openly-gay man and first Asian-American Democrat to be elected to the statehouse, with a campaign based on healthcare, equality and economic policy. He served in the Georgia House Democratic Caucus as Deputy Assistant Whip. Cannon, a member of the Executive Committee of the Georgia Legislative Black Caucus, is the only openly queer member of the Legislature.

In an interview with Georgia Voice, Park said that the upcoming election was a “fantastic opportunity for our community to increase our representation in the Legislature.” Park argued that it was “important for our community to elect Park Cannon … she has done such an incredible job advocating on a wide range of issues; it’s critical for the community to do all we can to elect her for another term.” Park has emphasized his desire to run on the same platform as before —access to healthcare, dignity for all and a healthier economy.

Wilson told Georgia Voice he was running for the Legislature “to focus on issues that matter.” Residents of District 80 were tired, he said, of “legislators spending their limited time each year debating hateful legislation like ‘religious liberty protections’ that are just licenses to discriminate, bills to allow college students to carry guns on campus and English-only requirements that target hard-working immigrants.”

Instead, Wilson said he would focus on the topics of education, transit and health care. He was running because his experience as “a middle-school teacher, a trial lawyer and an openly gay man is needed under the Gold Dome now more than ever.” Representation matters, he said.

Jeff Graham, the executive director of Georgia Equality, an LGBTQ advocacy group, said he is focused on the May 22 primaries first and then the judicial and municipal races after that. The group was waiting on endorsements [UPDATE: Georgia Equality announced endorsements on April 13]. He praised Park Cannon, calling her “an exemplary representative of the LGBTQ community down at the Capitol.”

He also praised Sam Park: “We need to make sure he retains his seat this year. I hope folks will support him. He’s become a key expert on Medicare expansion, making sure that folks get medical insurance when they need it.” Graham said the number-one goal of Georgia Equality in the coming session would be the introduction of comprehensive, inclusive civil rights legislation in Georgia.

Georgia Voice talked to Park Cannon, who sang the praises of her team: “As we head towards the May 22 election, we are excited that so many volunteers have reached out to contribute their time and energy to our campaign.” She specified health care, transit and schooling as areas of chief importance. “We want to make sure everyone knows it’s an opportunity to maintain LGBTQ elected officials in Georgia.”

“The truth is,” Wilson said, “lawmaking is about building consensus. The more LGBTQ elected officials we have under the Gold Dome, working across the aisle on various issues for their constituents, the harder it is for other legislators to successfully introduce or pass bad bills that target the LGBTQ community.”

Cannon was optimistic: “We are on the cusp of an opportunity to turn Georgia blue, to get as much support as possible … to get the people who really matter better alternatives.” Or, as she put it, “Better solutions to a better Georgia.”